Some players predict the end of World of Warcraft, arguing that the popular MMO is running out of steam and its vital energy has extinguished. Others state that Blizzard is still ahead of the pack and new games are nothing but surrogates that struggle to replicate its immense success. You don’t need to choose sides to enjoy Tera Online, because although this title belongs to the same celebrated genre, it has plenty of innovative elements to help it stand out from the crowd. 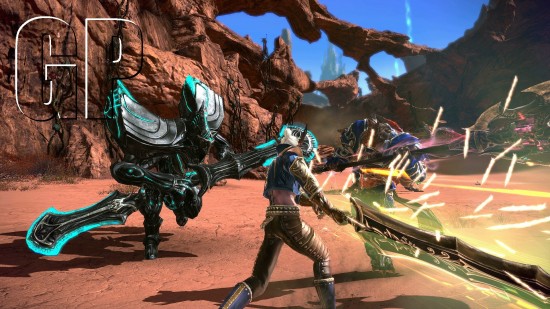 Tera is not going to captivate you with its narrative, so if you expected to get fully immersed into a storyline that is innovative and engrossing, then you might be disappointed. The quests are simply too repetitive to be fun and the foes encountered in the open-world PvE fail to inspire awe, except maybe for a couple of giant roaming monsters. Most of the time you will face a plethora of minions that look similar to what we’ve seen in other MMOs and the different names are not enough to make them special.

If you would stick to the main quests and follow strictly the campaign, you will probably feel shortchanged by Tera. The progress is not tedious, but it is not particularly fun either, due to the fact that neither the characters nor the story are convincing, so you should explore the surroundings instead. The graphics are amazing most of the time and the attention paid to details paid off, so once you venture off the main road you will find plenty of reasons to travel around.

While the story is somewhat forgettable, the combat system is memorable and it is enough to keep you going even if everything else would fail to meet your expectations. Unlike in other MMOs where you rely mostly on gear and level, in Tera Online it is skill that makes the difference when fighting monsters. You need to be constantly on the move, aim for the target and execute a combination of moves to inflict maximum damage.

It is something that most MMO players haven’t encountered in their previous journeys, and a solid reason to look forward with confidence. The developers have this anchor to build on, but with the level cap being at 50 and the gaming experience less than stellar at least during the first levels, time is running out quickly. I am not disappointed by Tera Online because I didn’t have high expectations and I regarded it mostly as a one trick pony, that bets everything on the innovative combat system.

If you don’t mind taking a leap of faith, be my guests and watch this video to get a glimpse at what awaits you in the exiled realm or Arborea. I will rate it 3 out of 5 stars for the effort the developers put into coming up with something original, but I have to say that there is still plenty of room for improvement.