I’ve been gaming now for quite sometime. Matter of fact I’ve been playing video games now for well over 20 years. Sure seems like a long time and we sure have came a long way since the old days of Nintendo and Sega, but it’s still these old games that I hold very dear to my heart. Having said that I thought of a great way to be able to share my opinion on all of these old games by starting a series titles “Retro Video Game Rewind” and featuring my thoughts on these old games some of which you’ll love and others you’ve probably grown to hate.  So let’s take a ride back in time as I share with you my thoughts on some of the best and worst of video games. 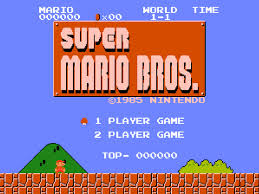 So I had to start this series with the first ever video game I played which was Super Mario Bros. for the Nintendo Entertainment System. Mario is an icon that gamers and non-gamers all know and love. I remember back when I was 6 and my aunt bought me my first video game system the Nintendo Entertainment System and I immediately fell in love with video games. The great part about Super Mario Bros. is that it is a very simple game and although easy at first it is here where I discovered the many challenges I would later face in other video games.

First off let’s talk about Mario himself. I remember wondering as a kid how can he keep hitting those blocks over and over again? I mean you’d think his head would hurt after hitting so many right? Also I remember how cool it was eating a Mushroom and Mario growing not to mention eating a flower and being able to shoot fireballs at your enemies I’m glad I wasn’t one of those kids who tried to implement said things in real life. I also remember this being the first time I ever raged in a video game because those levels later on were crazy especially the ones with the platforms that fall after being on them so long. However, it wasn’t until I discovered what would end up being a video game cliche….

After beating Super Mario Bros. I felt like I had truly accomplished something I remember how good it felt beating a video game and it was this same feeling that made me come back for more. I kept playing SMB over and over again trying to beat my high score and this is when I realized that although video games are fun they are also challenging and that is another reason why I kept coming back. It was man vs machine. Brian & Mario vs King Koopa. Good vs Evil and after I had vanquished evil I was ready to take on more.