Komoona is a relatively new advertising site which allows users to host banner ad spaces on their website or blog and then sell them to advertisers at set rates.  Komoona directly competes with other such services like BuySellAds, AdvertiseSpace, OIOPublisher and even the WP125 WordPress Advertisement plugin.  However there are some features of Komoona that I really liked and other features that are in the works that can give this site an edge.

So Why Use Komoona to Manage your Ad Space?

Komoona automates the selling of ad spots on your site unlike the WP125 ads which requires you to manually do everything from linking to a sales page, putting in the banner, set date ranges, negotiate prices….etc.  Komoona also provides an easy “purchase” interface which allows an advertiser to create an instant banner if they don’t have one premade to upload.  They can do this all directly from your own site in an Ajax Window that pops open when they click on the “purchase” link for the banner ad slot.

It is pretty simplistic but is a nice feature, and you get to set banners they can use as a template, you can even create your own default banner background for them to select as an option when creating a banner.

Komoona does not have a minimum price set like BuySellAds or AdvertiseSpace, this means you can price $5.00 or $7.50 banner ads on sites that have a lower amount of traffic.  BSA and AdvertiseSpace have a $10.00 minimum for selling ads in their network.

BSA keeps 25% of the banner ad sale, Komoona pays 100% of the Advertised rate to the seller and keeps no commission for themselves.  This means you keep 100% of your banner sale profits.

Some advertising banner sites only sell month by month ads, but Komoona allows advertisers to directly pay and purchase from 1week, 1 month or up to 3 months.  The blogger can set rates for week by week or monthly, and can discount based on the length of purchase.  I like to make it cost less per week if the advertiser buys more than 1 month at once.  Komoona will also automatically notify the advertiser a few days prior to the ad expiring to prompt for renewals.  Komoona also allows advertisers to pay via PayPal, Credit Card or Webmaster Code (more on this in a bit) 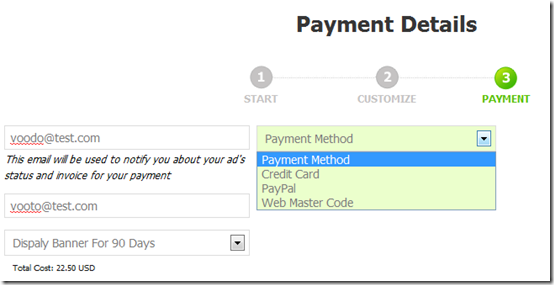 Give Away Banner Ad Slots

This was a big winner for me, Komoona gives the webmaster a “webmaster code” which allows you to basically put in a banner ad on the spot for 30 days without charging.  This is ideal for giving away a free ad space in a contest and this is something you can’t do with BSA or AdvertiseSpace, the advertiser will still get notified when the ad is about to expire when you enter in their email address so they have the option to pay to renew it.  This is a great option for generating some buzz and helping to promote your ad slot.

So these are the features for the Komoona ad on your site, but what does it look like from the Control Panel Side? 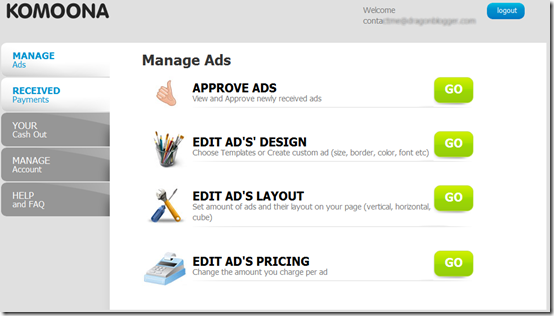 Komoona makes it really easy to list multiple sites and set prices for each site, you also get notified when an ad is purchased and have to approve the ad before it will display.  When listing your site you select the category and estimate the number of pageviews that the site receives, as well as a description of the site.  You can set your cashout information like paypal emails and minimum cashout amount which is paid out monthly when reached. 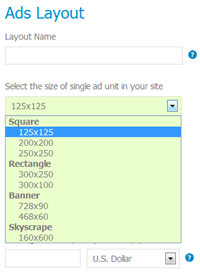 AdvertiseSpace is limited to 125×125 ads, but Komoona allows you to create any size ad and put them anywhere on your site.  You can simply create new ad layouts for each of your sites and can choose from the following ad slot types.  You can also set custom ad prices based on the type of ad slot as well.

Currently Komoona has a WordPress plugin you can download and it will install the code for you, it has a widget you can drag to your sidebar to handle any sidebar ads that are default.  If you need to place ads that aren’t going in your sidebar, you will have to manually insert the php code into your theme .php files like single.php however.

Komoona is a really new service offering, but it has a ton of potential and they added at least six new features since January 2011.  Some additional features the service could use are:

I mentioned to the company that they should have a marketplace that advertisers can use to find and advertise on blogs based on keyword searches and categories defined for sites listed in the network.  This is something that OIOPublisher, AdvertiseSpace and BuySellAds has in place although BSA by far has the best marketplace of them all with showing actual banner impressions and allowing filters based on impressions or price of banner ads.

Komoona designed it so that their banner loads last so that website pageload times were not negatively impacted, but I noticed the banner can sometimes take a few seconds to display even after the page has finished loading.  They should improve this so the banner isn’t missing and “suddenly” appear, it creates a cosmetic anomaly that isn’t appealing.  Though they claim it is purposeful as to not hurt a blog’s pageload time so it doesn’t have to wait for the banner ad to load.

Currently Komoona has you estimate site traffic, but there is no real impression or click tracking that advertisers and bloggers could use to show the return on investment benefits of advertising with their sites.  This is something that definitely should be added at least from an Advertiser perspective so they can know how many impressions their ad received.

Komoona currently is a better alternative to WP125 ads in my opinion based on its ability to automatically let advertisers purchase an ad and collect the funding.  It’s ability to let an advertiser create a banner while on your own site if they don’t have one is a really great feature.  I think Komoona is a great option for bloggers who don’t have more than 5,000 visits per month and may not be approved for the BuySellAds network yet.  It also allows bloggers to set rates lower than $10 so they can make maybe something instead of nothing for an ad slot, plus the ability to giveaway ad slots in contests is something BSA and AdvertiseSpace both lack.

Komoona has a ton of potential and I only see it becoming a more viable competitor to other advertising networks in the future, the service also needs to age and gain some longevity however because at current people have a hard time trusting a new service until it has time under it’s belt and proves it can stay afloat and not go under within a year of starting up.

I decided to test using Komoona on all my blogs instead of the WP125 WordPress plugin and you can see it on my sidebar of this blog as well as my poetry and personal blogs.