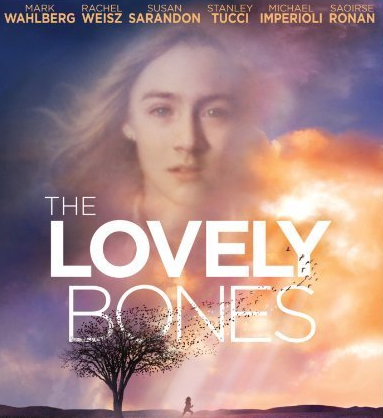 The lovely bones is a murder thriller by director Peter Jackson of Lord of the Rings fame the movie has an ominous yet hopeful presence and keeps you engaged throughout the film.

The Lovely Bones is a murder mystery movie with a touch of spiritualism in that it portrays the murder victim Susie Salmon in the afterlife as she watches and tries to assist with the capture of her killer.  Susie’s life as a young teenage girl in the 70’s appears to be captured perfectly until it is taken from her by a serial killer.  We see the distraught and frustrated parents cope with her murder as well as her younger sister and friends around her.  Susie was a smart girl and before her murder we see her love of photography as she burns through dozens of film rolls with which her parents don’t have the money to develop.

Here one mistake is trusting her neighbor which leads to her untimely demise and begins the next chapter in the movie.  I compare the movies version of the afterlife very much on how What Dreams May Come with Robin Williams envisioned it, lush and creative landscapes and a personal moldable heaven that changes and morphs into however your mind decides.  The creativity and artistic style are wondrous to behold all against the backdrop of a quite dark film that showcases one seriously disturbed and wicked serial killer played by Stanley Tucci which is one of the darkest roles I have seen him play.

Mark Wahlberg plays Jack Salmon father to Susie who becomes obsessed with trying to find and catch the killer responsible.  His dedication and obsession lead him to many false accusations and eventually to separate from his wife Abigail (played by Rachel Weisz) who becomes so distraught and withdrawn that she has to flee her family to maintain her sanity.

Susan Sarandon does a great job as the floozy almost irresponsible grandmother to Susie and her sister Lindsey, her way of helping the family cope (especially Lindsey) feels real and human.

The film will lead you through sorrow, frustration, wonder and anger and it does so masterfully in my opinion.  I am not a big fan of murder mysteries in general but the artistic style and touches of this film, plus the amazing narration and acting by Saoirse Ronan as Susie Salmon make it hard not to be captivated by her story.