As a  kid who owned Commodore 64 computers, Amiga and played everything from Atari 2600 to the latest consoles we have now, I can tell you that Tron was a movie of importance when I was a kid.  The movie which put humans inside the grid and gave life to programs in such a unique way was far ahead of its time for the concepts of artificial intelligence and design. 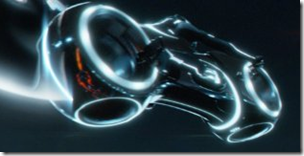 I had read about a half dozen reviews of Tron: Legacy before I saw the film and there were very mixed reviews out there, I can honestly tell my readers that they won’t help you decide whether you will or won’t like the film.  One thing surely everyone will acknowledge is the visuals are epically stunning yet simplistic.  How elegant and cool can simple glowing neon shapes and vector like vehicle designs appear is a true testament to the graphic designers in the film.  The second is the computer animation of Clu who is a completely digital version of a young Jeff Bridges.  In some scenes Clu is so realistic looking you can almost think you aren’t looking at a CGI person, at other scenes the CGI doesn’t hold up against reality so well so it does create a slight inconsistency in the realism while watching the film.

Without spoiling the film very much I will tell you that the movie Tron: Legacy does a quick job of recapping the first film and explaining what happens to Kevin Flynn a few years after the incident at Encom when he was digitized into the mainframe and fought with Tron to free the programs from the tyranny of the MCP (Master Control Program).  Tron Legacy does only resembles the first Tron by way of the light cycles, disc battles and vehicles in the movie. 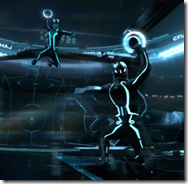 The disc battles by the way, were fantastically fun to watch and my only complaint was that there weren’t enough of them.  The opening sequence where the players relied on bouncing the discs off of hex grids was very reminiscent of the original Tron but the visuals made it feel brand new.

The ambiance of Tron: Legacy itself felt a lot like Bladerunner for me and some scenes particularly the ones with Michael Sheen who plays Castor were like some scenes in The Matrix: Reloaded, and yes I really am specifically calling out the 2nd Matrix film for this comparison.

This isn’t necessarily a bad thing as the dark and ominous overtone to the film is actually minimal compared to the action sequences and visuals which keep you engaged.  Olivia Wilde does probably the best job as Quorra in the film and plays a program that is highly energetic, curious and completely idolizes the "users" a concept which was very prominent in the first film but somewhat lacking in the second film.

The film touches on many things about how technology has changed over the years from peoples attitudes toward programs, companies and on the "grid" itself which is a variation of the Internet.  The fact that Kevin Flynn’s future vision of the grid was similar to something like people living in a digital universe almost felt a little like Surrogates or a future version of Second Life.

My kids who were 8 and 4 enjoyed the film immensely but had to stop and ask me questions at various points in the film when technical jargon (which was mostly meaningless) was spoken and they weren’t able to derive understanding.  Overall, the movie was a ride and worth seeing in theaters (I hear its even better in 3D but I only saw the 2D version).

I think the movie sets up pretty well for a sequel should it do well and you can see one is clearly possible from the outcome of the film.

As mentioned earlier the film lacked some of the humor found in the first film and was definitely darker and more striking, I thought Jeff Bridges did a good job playing two almost polar opposite characters as far as personality style and they confronted each other as you would expect and have hoped.  Dare I saw there is a little bit of Star Wars in the film itself two?

Dragon Blogger gives Tron: Legacy 4 out of 5 stars for stunning and entertaining visuals and it probably is showing you a glimpse of what is to come in the actual future of Artificial Intelligence without you even realizing it.