WHAT GAME IS THIS?

Royal Visit (“Hail Majesty!”) is from IELLO publisher. This is also a retheme from the Times Square series of publisher KOSMOS. This is an abstract strategy game with tug-of-war and hand management. Two players will try to move pieces and invite the king to visit their castle, using the cards in their hand as well as the functions of the cards on the board.

On a 17-square chess board (1 center square and 8 squares equally divided to both sides are the “territory” of two players) there are 5 pieces for players to move: 1 king (king), 2 soldiers (guard), 1 magician (wizard) and a clown (jester). Each turn, the player is allowed to play as many cards as he wants of the same suit (suit – corresponding to 1 card on the table), creating conditions to be able to perform the function of the piece and achieve the final goal. Finally, take the king to his castle to play (the castle is the last 2 cells in the territory). Besides, on the table there is a crown token and players can also use it to win. 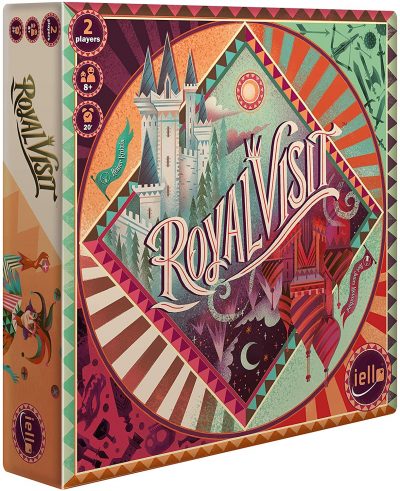 During a turn, players take 3 actions in turn:

1. Play a suit of cards in your hand OR perform a character’s special ability

You can play as many cards of the same suit in turn as you want, and move the card corresponding to that suit the number of steps corresponding to the card in the direction of your choice, meeting the condition that the king must always be in the middle. 2 soldiers.

There are 2 cards with special abilities on the board: the magician and the clown. If you want to use a mage’s ability, you must not play any cards in your hand in turn, instead immediately move the king to the square where the mage is standing. To use the ability of the clown, you have to meet the condition that the clown must stand between your castle and the king; you can then play down the clown suit cards and use it to move another card during your turn. All moves using this special ability must ensure that the king is always between the 2 minions.

After playing cards, if “Court” (a trio of *2 cards with 1 king* called Court) stands in your territory, you can move the Crown token towards your castle by 1 space. If there are any pieces standing in your castle area, you move the token number of cells corresponding to that number of pieces towards you.

The player ends his turn by drawing all 8 cards in his hand.

The game will end when one of the following conditions is met:

1. A player who gets the king back to his castle, that player wins

2. A player moves the Crown token to his castle area, that player wins

3. As soon as the deck is drawn for the second time (after the first deck is exhausted, shuffle the discard pile and draw again), the player whose king is in his territory is the winner. 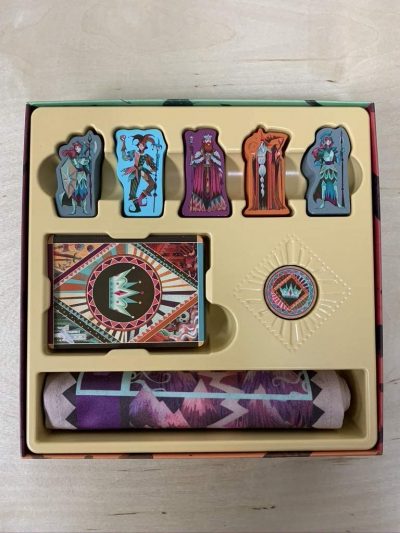 WHERE IS THE FUN

1. The game is beautifully designed. The character design on the cards is very aesthetic. By looking at it, you want to collect it immediately, regardless of the gameplay. In addition, I really like the wooden pieces. I like the feeling of holding it firmly in hands. And when I move them, they make a beautiful sound like when playing chess or seahorse. The game board is fabric, so it’s easy to fold and easy to store. The game in general is very compact, and convenient to carry with you.

2. The role of the pieces is very balanced: Unlike chess, you have to control 16 pieces at a time, and focus on the strong pieces or the pieces that are under attack, Royal Visit has only 5 pieces on the board. . To win the game, you must properly control all the pieces, because the magician and the clown have a special ability that only works when it is near you, and the king can only move in the range between the two. soldier. Either way, you have to pull troops to your side to win.

3. The rules of the game control time very well, so that the game is concise, not lengthy. In a turn, there are only 17 cells, 8 cards and 5 pieces to move, not taking too much time to calculate. Therefore, a game will only last about 15-20 minutes, just enough for 2 players to crave another round of the next game (for the loser to take revenge), but also enough tension for a game of wits.

How about the BORING part ?

1. Although it is an abstract game, but combined with hand management, there is still a little bit of luck, when you have to rely on the cards in your hand to take action. For example, the Mage is already in my castle and I pull out a handful of the Mage, it turns out it’s useless. Actually, this also affects the way of playing, that it is not advisable to use all cards of the same suit in one go, to save a way to live later, but in terms of late game moves, what cards are drawn? significant influence on the overall results.

2. Good gameplay, but it’s a waste of 2 players, whoever develops the 3-4 player version for you. Actually, the 2-player game also has a good and abstract game form, people watching the match will also find it interesting, but if they think of a format that makes Royal Visit increase the number of players, they will probably like it more. 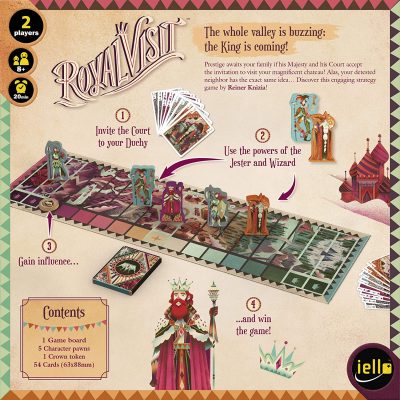 The game is beautiful, compact, fun enough and also stressful enough for a 2-player game (you know, abstract). Hope everyone enjoys this series and if you choose it, have a good time with Royal Visit!

You can purchase Royal Visit on Amazon at this link