When mentioning Alexander Pfister, many people will think of the Western cowboys in the Great Western Trail, or economicizing Africa with Mombasa, or controlling chaos in Blackout: Hong Kong. But it is impossible to not to mention lighter games like Port Royal or especially Oh My Goods!

***Oh My Goods*** brings an extremely excited feelings to players. The feeling that players try their luck in drawing cards, until they find cards that create a chain effect, etc. Oh My Goods offers too much for players, especially considering the money and size of the game.

But, in this article,  we will focus on Expedition to Newdale – the next chapter of Oh My Goods

In Expedition to Newdale, players will return to the kingdom of Longdale with a series of different campaigns. Each campaign has different setup, and independence from each other. 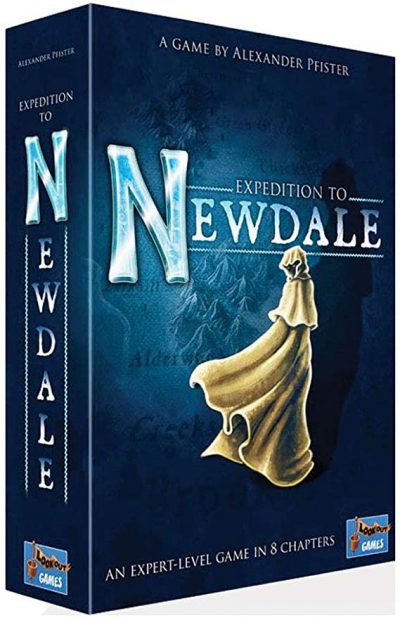 Players will start with a Coal factory and 5 cards in their hand. In addition, each player will have 2 action markers marked 1 and 2. Depending on the campaign, the number of rounds is different. In each round there will be 5 stages.

1. Create new events for the round. Each event will have a corresponding number of worker types (yellow, green, red, and blue).

2. The player places the action markers. In the Marker activation phase, we will activate in the ascending order.  Meanwhile, in this stage, it is all about planning. The player can pay to buy more action markers 3 and 4. Action production depends a lot on the number of available workers as well as picking up in step 3.

3. Load more workers. In addition to the number of workers available from the event, the player will draw a certain amount of labor. With luck, the player will get the workers needed to trigger the action in stage 4

4. In this phase, the player will activate the Action Markers that were set out in phase 2. The order of activation is from small to large action markers. If there is not enough production, a player can discard a certain amount of cards in their hand in place of an absent worker. 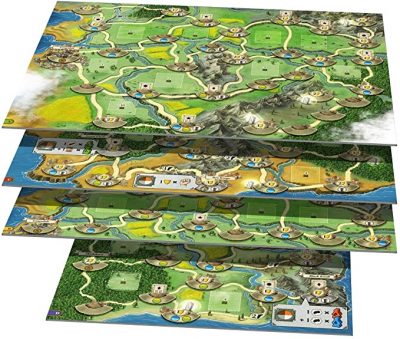 1. One of the best things that I failed to introduce the rules of the game is the synergy from the cards. Just like in Oh My Goods, the player can create a chain reaction during production. This system satisfies players a lot, like the way you solve a difficult math problem. Farms produce beef, which you then transfer to another resource of higher value. What could be better than having your engine built and run smoothly?

2. The game challenges players with planning what to do. In other casual Worker Placement games, players would normally send their workers to trigger immediate action. Players can calculate each step and come up with a reasonable strategy. In Newdale, players will have to meticulously plan the activation order of each zone. Just stumble a beat, the player easily misses that round.

3. Another important factor, affecting the player’s planning, is luck. AlexP has done a great job in minimizing and harmonizing the luck factor in Newdale. Players, still able to eat a lot, produce in areas that need a lot of workers. If all else fails, the player can still use the cards in their hand as a backup. In addition, the player can also choose a safer option, only producing what is available, or highly likely will be.

4. As mentioned above, the cards give players a lot of interesting choices. The card composition can be said to be the core of Oh My Goods, as well as Newdale. Players can build factories from cards, or use them to replace the shortage of workers. In addition, as in Oh My Goods, the player can leave them to produce resources from another factory, This gives the player a lot of flexibility in finding solutions to problems in the game.

5. With 8 campaigns, 8 setups as well as a bunch of events, it’s not too difficult to say that Newdale brings a very high level of replayability to players. Not only that, these campaigns are completely independent of each other, not much affecting the game play of other campaigns. This idea was also reused for another game of the same year: MARACAIBO.
Negative feelings

6. The biggest minus point of the game is the lack of interaction between players. The only interactions between players are indirect interactions. This player builds a house in the market, stops other players, etc. For the rest, all the players are mostly playing with themselves on their own board. This can be a great thing for solo gamers, but it’s too hard for interactive players to pick up.

7. Although the element of luck is much improved compared to Oh My Goods, to be fair, NewDale still has a lot of holes based on luck. From the cards that come up

If you are a big fan of Oh My Goods, Expedition to Newdale is a must try for you. You can check it out at this link. 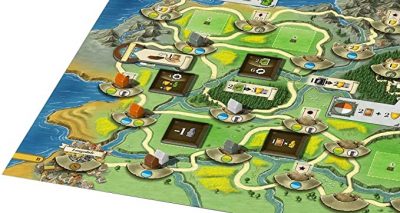