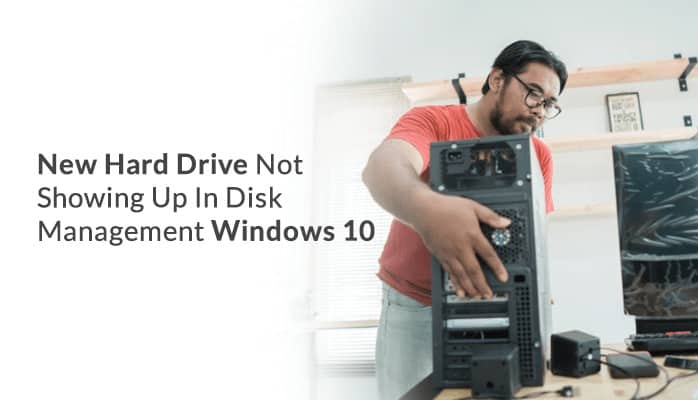 Several users report that a new hard drive not showing up in disk management Windows 10. This means your computer requires a hard drive to store the local files, software installations (including Windows), local information, and many more. These important things allow you to run the computer. Many users are complaining that new hardware is not appearing in their BIOS settings therefore, it doesn’t show in the Disk Management. The problem is not specific to a defined Windows version as it’s reported to arrive in Windows/7/8.1/10.

This blog will provide you the methods to fix this error but firstly, know the reasons why this error occurs in the system.

What are the Causes behind when a New Hard Drive not Detected?

We have investigated this error by looking at the many user’s reports and the steps to resolve the error are followed:-

Now, you have cleared with the causes. Now, we are going to discuss some methods to resolve the issue with easy steps in the next section.

Method#1: Delete all the ATA channel drivers with device management

A few users facing this particular error but managed to fix it entirely after the use of Device Manager. They manage by deleting all the ATA channels from IDE ATA/ATAPI controllers menu. This forces the Windows to find all the connected ATA devices again. Then re-configure them from scratch at the next system startup

Here are the steps to do this:-

Method#2: Importing the Foreign Disk from the Disk Management

The disk may not appear as a viewable partition inside Computer or Disk Management. This is because it is seen as a foreign disk in the system. But some users are facing the same issue and are able to easily resolve this by importing the foreign disk. Follow the steps to do so:-

Above we performed the manual methods to resolve the issue of new HDD is not showing. But as you know the steps of manual methods are quite complex and take time to process. So it’s better to use professional software for an easy procedure.

It’s a better option to use secure and reliable professional software. We provide you Sysinfo Removal Media Data Recovery Tool to solve the issue of a new hard drive not detected or USB Drive Not Recognized in the system. It can restore data from corrupt or damaged hard drives. It also supports the hard disk data recovery after an accidental formation. The tool comes with the advanced modes for scanning the corrupt physical drives. Its GUI is user friendly.