The best racing franchise to make it’s mark on the Xbox has returned yet once again with it’s third entry in the “Horizon” series. This time Forza Horizon 3 brings it’s Festival to Australia where sandy beaches, beautiful cityscapes and miles upon miles of Outback are all rolled into one. Forza Horizon 3 was one of the games that I really looked forward to when shown at E3 because I am a big fan of racing games in general especially after years of Gran Turismo dominating the market and other racing franchises such as Need for Speed vying for their position as one of the greats among racing titles.

The game starts off by thrusting you right into it’s introduction of having you drive to the Horizon Festival just as in previous entries. You are also showing during this intro some baja type racing as well. Something I happened to notice was that while the radio was blasting one of my favorite Blink 182 tracks my radio signal was interrupted while driving inside of a tunnel along the coast which although might be a minor detail it is one that will make you smile a bit knowing that this much detail was put into this game. 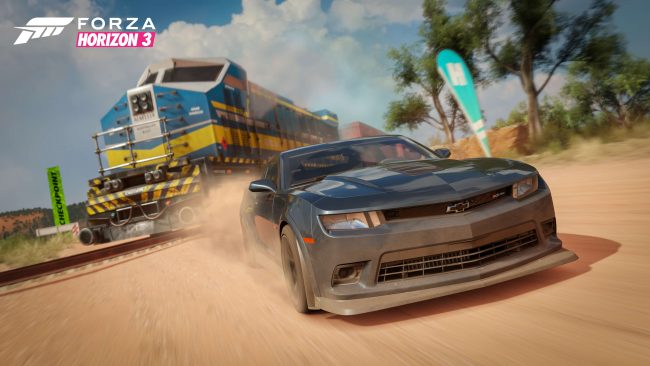 At this year’s Horizon Festival you are now placed at the center of being in charge of things being given the title of Festival Boss throughout the course of your game. Being the Boss is a real game changer because you have a lot more control over the types of races you can choose from. This means that instead of just arriving at a race and playing the event you will unlock the ability to actually create your very own types of races in the form . From being able to choose what kind of cars you want in the event, weather conditions, type of race (championship, exhibition or rivals) and even being able to name your event. The Forza Horion Blueprint system gives you the ability to make each race unique and just the way you want it. Although I was hoping for the ability to actually create your race in the form of routing the races this still gives you the ability to make each race you do in your career different from the normal ones in game.

The music in the game takes samples from a wide variety of artists including Skrillex and Young MC to the Beastie Boys and Blink 182. This time around not all of the radio stations are unlocked as you have the choice to sign which radio stations you want to be part of your festival. Forza Horizon 3 integrates Groove Music, Microsoft’s music streaming service, as one of the radio stations. What’s really cool is that new users to Groove are given a free 14 day trial, no credit card required, to use Groove Music. How this works in the game is simple. You download the Groove Music app on your Xbox One and then create your own playlist. I made a playlist called “Forza” and was adding songs in no time. Now I am able to enjoy pretty much whatever music my heart desires while driving down the beautiful landscapes that Forza Horizon 3 has to offer.

Speaking of the landscape this game is truly remarkable in the graphics department. From the sounds of a storm to the way the water hits the rocks right off of the Australian coast this game is the definition of beauty in a racing game. There is no much detail in each car that you will want to visit the Forzavista to truly appreciate just how incredible the cars look this time around.

Playground Games has done a remarkable job giving players and fresh new racing game with alot more control for the player this time around on exactly what kind of adventure they want to have. You can even play a co-op adventure with up to four of your friends online where you can level up or drive around to find the many secrets this game has to offer. There is even a drone you can unlock and fly around to help find bonus boards and other secrets. Everything else you know and love about this series is still here such as wheelspins, skill points and real time leaderboards so you can see just how many roads you have discovered compared to your friends.

This is the racing game I have been waiting for and Playground Games does not fail to disappoint. Go out and grab this game right now and find out for yourself why the Forza series is in my opinion the premier racing series this generation.