Ur was an important Sumerian city-state in ancient Mesopotamia, located in what is now Tell el-Muqayyar (Arabic: تل المقير) in the Dhi Qar province of southern Iraq. The city dates back to the Ubaid period (about 3800 BC), and has a recorded history dating back to the 26th century BC. 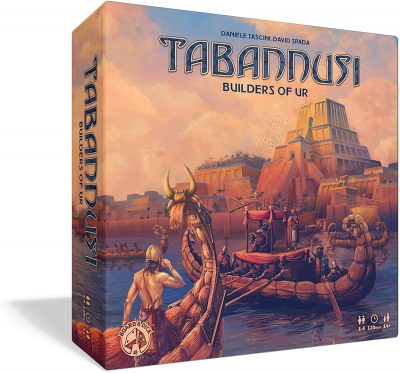 There are 5 different ares on the game board. There are 3 areas focus on city building, one harbor construction area and 1 Ziggurat (temple) construction area. Each area will correspond to the dice value from 1-5. In addition, each region has only one type of dice to use as a resource.

Each player will have a player board with 3 buildings of each building type (yellow, white and brown) as well as 5 neutral buildings. In addition, players will also start with 5 Claim Token and 3 Mastery Token for 3 yellow, brown and white tracks. As for workers, players will have 1 Architect and 1 Assistant.

When an area runs out of dice, the player enters the scoring phase. All dice for that area will be rolled and rolled back to that area. If a player has a confiscated dice, the player will be entitled to a corresponding benefit. All players continue their turn. The game ends after 5 such scoring stages.

The basic actions in the game include: building a house in the street, placing a project (must have a house project), digging a garden canal. In addition to these actions, the game also has many different action boards, which are randomly selected at the beginning of the game 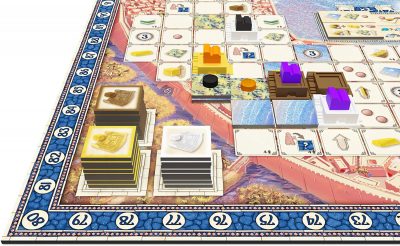 – It takes a little bit to learn the game. However, after that, the game play is pretty smooth. Not too many restrictions in the action and there is not a lot that can interrupt the game flow.
– The game’s action selection system is really innovative. The system requires the player to plan at least one turn (sometimes at least two) to use the action.
– The game has a lot of opportunities to create wombo combos to score consecutively.
– The number of token claims is limited, players must know how to control tactics, as well as strategically use them to be more flexible in actions.
– The reward system for the Mastery scale is very challenging. It’s not just an increase to be rewarded. The player is only rewarded when the lowest mastery position is moved up.
– Interaction between players is also very interesting. From a perspective, the game is like Semi-Coop to build a house. Another aspect, is to occupy land to build houses. It’s not just the interaction that takes the place, there are many interactions such as racing for one-time use rewards, racing for Achievements, digging gardens for other people’s points, etc.
– The game really has many different ways of setting up, making players have to change their approach to the game. The game does not create the illusion of a setup like other games like Tekhenu. 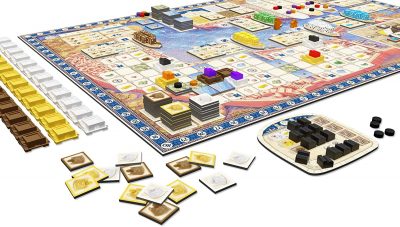 – As a game in the T-series, it is not surprising that the speed of comprehension is like a Parabolic graph. Reading and learning is not enough. It takes practice to understand the gameplay of the game.
– The game is hard not only about the rules, but also an interlaced Icon system. You might need to consider the audience that introduces the game.
– The dice value is only used for moves. Also, they don’t really have an effect on the action, nor on the strength of the action.

– The game only has a bag to store the plastic works. The rest of the ingredients, roll like a ball from corner to corner.
– The game is prone to snowball symptoms. Once the player has a smooth engine system, there is almost no way to interfere, or stop the player.
– Game has a forest of icons, but there is no player aid? The first round had to guess the meaning of the icons
– The game board needs a separate designated area for the resources (dice) used

You can purchase Tabannusi at this link