The midseason finale (as AMC is calling it) of The Walking Dead episode, Made to Suffer, definitely left fans on the edge of their seat.  It is almost cruel the way we have to wait until February.  What’s worse is, right now the actual date is not on the AMC website so it could be the end of February not the beginning.  Until then, let’s look at this week’s episode.

The first people we see this time around are five new faces: Tyreese, Sasha, Ben, Allen, and Donna.  As they fight their way through a herd of walkers, Donna gets bit but they won’t leave her behind or kill her just yet.  Instead, they find the back of the prison with a space in the fallen fence big enough to walk through.  It might seem that this would make it easy for walkers to repopulate the prison, but since the group had to duck and walkers aren’t smart, well I don’t think that will come about any time soon. 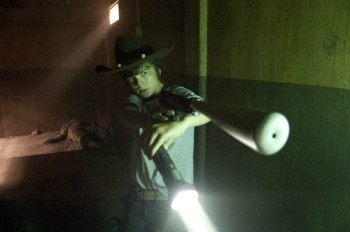 Carl and Hersel later hear noises in the tombs of the prison.  Hersel asks Carl not to check it out but Carl makes it clear it’s his job to protect them and heads off.  I found it interesting that Hersel still let the boy go and treated him like a man, makes you realize just how far the group has come from the early days.  What Carl finds is this new group fighting a small hoard in the boiler room.  He helps them escape and leads them back to the common room of their safe area.  After locking the door behind them so that any stragglers who might find their way to them can’t get in, he says he’ll take care of Donna.  Tyreese claims they will take care of their own and prepares to use his hammer on her.  While their attention is diverted, Carl heads to his groups’ area and locks the door so the new group can’t get to his people.  Sasha demands to be set free from this prison but Tyreese makes her stop.  It was nice to see that someone else understood the safety factor and they are currently safer than they had been for a long time.

Rick and the rest of the rescue group are trying to find a way in when Michonne gives them one (after she disappears for several moments).  It was too easy for them to get into Woodbury and I couldn’t help but wonder how the perimeter was so easy to bypass and why there weren’t walkers still getting in often.  Anyhow, the group begins to question Michonne’s trustworthiness at this point because Glenn and Maggie are not where she was questioned; again, there is no mention of Andrea.  One of the residents saw them come in the back way of this residence but the group knocks him out and then begins to find their captive friends.

While Maggie and Glenn await their fate, Glenn looks at the dead walker and begins to rip its arm off, digging into the flesh.  Maggie is appalled but when he hands her a sharp bone, it’s obvious what he has done.  I have to admit, I knew what he was doing as soon as he ripped the arm apart at the elbow.  Did you?  Anyhow, when Merle and another guy come to kill the pair, Maggie jams the bone into her captive’s jugular (oh yeah he was dead before he realized it was possible) and Glenn is fighting with Merle.  Right when Merle gets the upper hand, Maggie has a gun and threatens to shoot him.  Unfortunately, at this point more Woodbury residents storm in and recapture our lovers.

As this is going on, the Governor realizes that not only is someone in Woodbury but it is more than likely his captives’ friends.  He tells the protectors “shoot to kill” and asks Andrea to check that they have not taken any resident hostage.  She thinks this is dumb because she can fight but the Governor can’t have her find out who really is in their town now can he?  Rick and the group do manage to rescue Glenn and Maggie and start to make their way out of Woodbury.  Even with smoke grenades to cover them, they must fight across the open street to escape.  Michonne disappears around this point and Rick’s comment is that she is on her own as Glenn can barely walk.  Andrea is on the streets during this and manages to shoot at the group, but luckily doesn’t hit any of them.  Poor Oscar though gets killed helping Glenn over the barrier and Maggie shoots him so he can’t come back (I think she should have let him as he would add to the chaos the Woodbury residents had to deal with).  Rick hallucinates that Shane is coming toward him but after he kills him, realizes it wasn’t.  Does this mean that Rick will start to see Daryl everywhere? 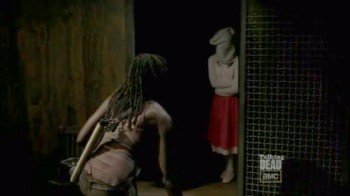 Michonne hasn’t left the group for good; she just wants to kill the Governor before she leaves. As she is waiting for his return, she hears a noise from another room.  Investigating it, she finds the wall ‘o heads and sees the gate, where we saw the Governor attempt to control Penny from earlier.  Here Michonne doesn’t act rationally and takes the chain off the little girl before checking to see why she was locked up in the first place.  Of course, right before she can kill the child walker, the Governor shows up and begs Michonne not to harm her.  If that is an attempt to feel pity for this man, it failed miserably as all I can feel is disgust.

Michonne stabs the little girl through the head (that was up close and bloody on screen) and a serious fight ensures between the two enemies.  The Governor slams Michonne’s head into the head tanks (yuck) and she pulls two of them down, causing the heads inside to move again in an attempt to bit anything.  During the struggle, the Governor almost pushes Michonne into one but somehow she manages to stay away from the head.  When she can’t reach her sword to kill him, she grabs a glass shard out of a tank (I still cringe watching the blood on her hand) and jabs him in the eye (I literally commented out loud that he got what he deserved at that point).  Right before she can behead him though, Andrea shows up with a gun pointed at Michonne and the short face-off had me worried about Andrea being even more stupid than she had been before.  Instead, Michonne walks away to rejoin Rick’s group and Andrea sees just how nuts the Governor is.  Of course, we do find out she IS even more stupid than we could have thought because she just questions the Governor about why he had the heads and his dead little girl instead of leaving right then and there. 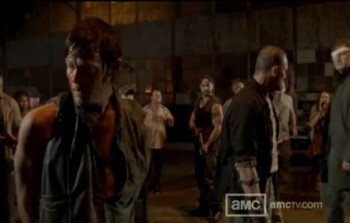 Outside Woodbury, Rick is extremely suspicious when Michonne turns back up.  She surrenders her sword without complaint but reminds Rick that he does need her to get back to the car with all the walkers around.  He isn’t happy but he does agree.  Back inside Woodbury the Governor, with one good eye now, tells the town that they were invaded by terrorists and turns on Merle (since Merle lied to him about Michonne) stating that he led them back to Woodbury.  All I had to say was Merle you reap what you sow.  To make matters even worse for Merle, Daryl (who got caught when he laid down cover fire for the group to make it across to the barrier) is unveiled as one of the terrorists.  The Governor’s comment is “You wanted your brother, you got ‘im.”  We’ve always known the Governor was a heartless bastard so why is Merle so shocked?  Anyhow, as the Governor is asking what they should do with these two, and the town is screaming for blood, Andrea realizes (finally) just who was in town and what it means.

And here, my fellow fans, is where the story ends for us.  I’m not really surprised that’s what the writers did but man am I ticked off.  I at least want to see Andrea step in the middle and defend Daryl (Merle certainly doesn’t deserve it).  What will happen with Andrea now?  Will Rick’s group trust Michonne IF she explains that she was trying to kill the Governor?  Who will win the showdown between the two groups when the Governor attacks the prison?  Unfortunately, we have to wait at least two months to find out.  Until then, check out the return trailer and see if your heart was in your throat like mine was.