My Initial impressions and experience with EA’s Titan Fall Beta. 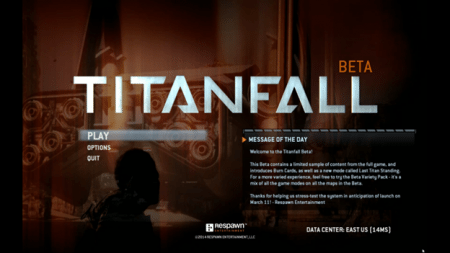 This game is so much more than a beta, this is what many games should be on day one, it is utterly amazing.  Before you read more, please note that this is a Beta, things may change on this game.  My experience in the game will be different from yours.

There is the standard training which I recommend you take because this game does bring about a few new things.  The training consists of learning how to walk, sprint, double jump, wall running, cloak mode, melee attacks, using your smart weapons and many others, but most importantly how to combat against and use your Titan.  You can be a standard grunt or a Pilot that can either be on foot or of course pilot the Titan.

A Titan can be a good thing or a bad thing, as you can imagine it is a bit slower and more confined than being a soldier on foot but there are benefits.  As a Titan you can take down tons of people with a single shot and more easily take on an enemy Titan but you have to worry a little more about everyone.  In this mode you are not only susceptible to attacks from enemy Titans but you have to worry about the opposing team jumping on your back, called a “Rodeo” and taking you apart and taking you down.  I have an example of me taking down a Titan in such a fashion.

I hop on his back, open him up and starting shooting into his electronics.  While you are on a rodeo, you are prone to enemies attacks but you can see in this video I jumped off of the Titans back, killed a foot soldier and hopped back on to finally destroy the Titan.  In a similar style on the next Titan I jumped up I was gunned down by another enemy.

You can also hop on your team mates Titans and act as a backup, a mode not everyone will like but it comes in handy.

Be sure to be a team player, because you can literally save someone’s life

With that and every death you get to see yourself in the enemies’ eyes on how they saw and took you down.  While some may take this as an annoying point, I see this as a great learning experience to see how you were seen and what you can do next time.

There are 3 modes in this game, Attrition, Hardpoint, Last Titan Standing and Beta Variety Pack. 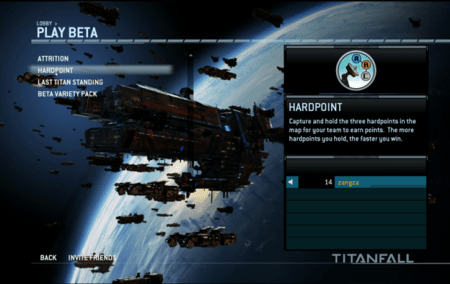 Attrition, as they state is a great place to start off at.  In this mode, it is essentially a team death match where anything goes.  Pretty standard game play but it lets you learn how the controls work and how to use your weapons.

Hardpoint, capture and hold three hardpoints in the map.  In this mode you capture and area, gain points and capture other areas.  You have to focus on these points to win the game and you must destroy any and all opposition in the processes.

Last Titan Standing, everyone starts in a Titan and must finish in the Titan.  In this mode there are a number of Titans, equal on both teams and you have to destroy each other.  The catch is if your Titan suffers enough damage and you need to get out, that’s one less Titan on the field, if there are no more Titans on your team,… you lose.  So it’s best to stay in tight knit teams in this mode and work with each other

Beta Variety Pack.  AS the title implies, in this mode there is every mode listed above.  I find myself playing this more often that any specific mode because every mode is just great.

In each mode, you have to think and act quickly as at every turn there is an enemy ready to tear you apart.

At the end of each round and in each mode, at the end of the round your team must evacuate, if you die in this time period you will not respawn until the next round.  If you get in the ship, there is a chance the ship can still be destroyed so play it smart.

I will leave the rest of the game to you, but I will have to say this game is amazing in my opinion.  The graphics or beautiful, the pace is amazingly fast and the audio is great.  A few times while I Alt+Tabbed the screen, the game dig have issues and Visual Studio (of which I have installed) did pop up asking to debug the problem, but I did Alt+Tab about 100 times and this only occurred about 3 times, could have been anything and that is the only issue I had with the game.  They did a great job on it, but like any beta please know that everything is not final, the game could get better or it could get worse, but I will say they are in a good point now and I will be buying this game when it comes out.

So aside from my opinion and my short review, what do you guys think about the game?