Finally Titan Fall is out, March 11th and started playing at around 7PM, I had to go to work.  It has been sitting on my hard drive mocking me for a few days after they launched the preload, such a tease.  It was a fairly quick download off of Origin but a huge one at that, about 48Gigs.

So first thing I did when I got home was to download and install the latest NVIDIA WHQL drivers said to ensure the best possible gaming experience for Titan Fall, although I did have issues.   After a reboot, setting up the NVIDIA console and enabling SLI, I was ready to go and started up Titan Fall 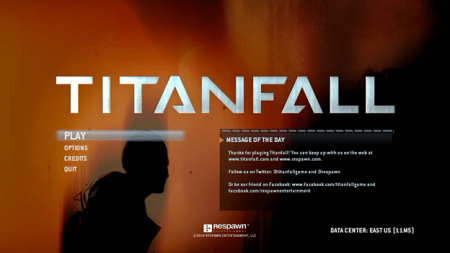 Once at the main screen I entered “OPTIONS” and configuring my video settings, of which I did notice by default AA was set to 4x and AF to 16X.  After seeing this I alt+tabbed and setup the NVIDIA Control Panel to Application-controlled for both of these then alt+tabbed back, maybe not the best move on my part, but I was excited so I was not thinking straight.  I should have exited the game, changed my settings, saved them then restarted the game, more on what I may have caused later on in the article.

After setting all my settings I ran through the training, already done during the beta but I figured a refresher was not a bad idea.  After a few minutes on that then I started the Campaign.  Even though this is a multiplayer mode only game, Campaign offers you a slight story line as to why you are fighting the good fight, I will come back to the Multi-Player/Single Player aspect, or lack thereof.  For now, in starting this campaign I was greeted with this sweet video

Titanfall Intro for the Dragon Blogger Review… by dragonblogger
Once the intro was through the game started loading the first map, “The Refueling Raid”, a Hardpoint Domination mode capture the flag style map also included in the beta.  With that said, nothing really new on this map but I did love it during the beta and it turns out I still did in the release version.  For those who have not previously played this map, “Fracture” is based on an abandoned gas mining facility.   Your mission there is to refill our militia which is in dire need of fuel for the continuity of our ships and future missions.  This map does have a few indoor areas but it is mostly outside, lots of room to run around. 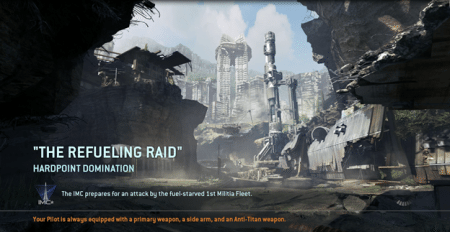 I started off running around a little confused for some reason, but got back into it quickly cloaking then helping to take down a Titan and wrecking a few enemy soldiers before getting killed, not a bad first run.  After respawning, I summoned my good old Titan buddy and started kicking some butt.  After a few minutes my Titan was less than functional so I jumped out of the Titan, ran through some trees and found a Titan to destroy.  I jumped on his back and started tearing him apart, I love bringing down one of these on foot.  After my team and I losing that round unfortunately, some of my guys were able to make it out alive, sadly I was killed in waiting.

The next map started loading and once again we were dropped off to wreak some havoc.  This mode was “The Odyssey” an Attrition mode map which is a teamdeath match style game, fun as well.  This map, “Relic” is based in an old IMC salvage yard where old IMC ships are sent for further processing.  As with all game modes in this game, you have to be quick on your feet, this I would say is one of the fastest paced games I have played in a while and damn it feels good.

Unlike HardPoint Domination, in Attrition mode it’s a team based kill or be killed deathmatch mode.  This like all team based deathmatch modes are meant to be played as a tight knit team, unfortunately it is very rare for people to work together, everyone is a hero in their own minds which many times means losing.  Relic is a more confined space than Fracture so with it, there are enemies at every corner and you have to be a little more cautious but no matter what it is still very fast paced.  There is still room for Titans, but you will feel a little claustrophobic.

After winning that round we were whisked away to another Attrition mode game, this map title “The Colony”.  This area is set in a city on its last leg, where there are NPC walking around, one of which I witnessed getting executed by another NPC clothed in much the same attire I was wearing… I guess I am the bad guy in the round.  You are able to use just about anything here, you have a wide areas to roam around in your Titan and fight amongst them or run on foot.  I had a very nice round on this map, amongst all my good kills, I was landing after being ejected from my exploding Titan next to 3 enemy troops setting up shop to start snipping people.  Run by one I snuck up behind the 3 and melee killed them it was nice.

We ended up winning the match but we did not destroy the escaping enemy ship.  After each round is lost, the defeated are able to gather their pride and run for the dropship to potentially escape.  While this ship hovers waiting for a limited amount of time for the last of the group, those that made it are sitting in a tuna can unable to combat the victors from firing upon and potentially blowing up their potential escape route, ultimately killing everyone on the ship.  Sometimes you make it out, sometimes you don’t.

Next Attrition mode section was “Get Barker”, its map is named “Angel City”.  This map, unlike the previous ones story seems a little more sinister, although the area reminded me of “Fracture” a little bit. 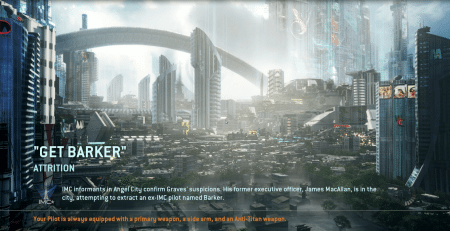 The story here is that this was the first city where martial law was declared by the IMC.  Massive walls were built to divide cities and checkpoints were setup to enter districts within them.   Of course with these walls, check points, security checkpoints brought on by martial law the residents of Harbor District were unable to move freely thought the city.  Within a city are buildings and these buildings seemed all in good operational condition but these give you a great opportunity for some nice wall walking and combat scenario’s.

This map, also in the beta is a fun map, but this is where my possible mistake made earlier setting the video settings up started appearing.  Like most FPS’, when you hit tab, you can see everyone’s score but now, the back ground of the score board looked like an LSD trip, each texture looking discolored, I didn’t think much of it, but in looking at my screenshots and videos, I see the beginning. 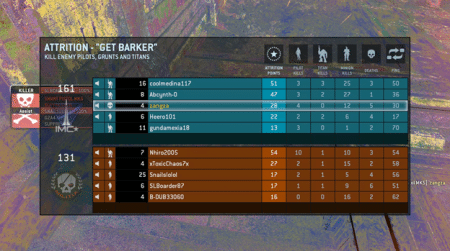 Well, this map continued normally, we were victorious then off to destroy the enemy ship, this time we did 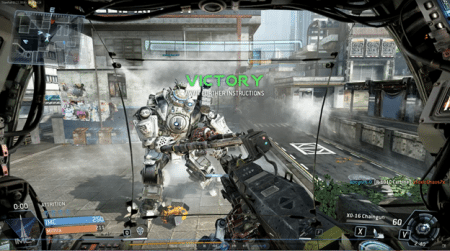 After each round, your character will be displayed and you will be presented with you XP wins throughout said map.  You also can see everything you have unlocked and challenges you are inches close to completing or have completed already. 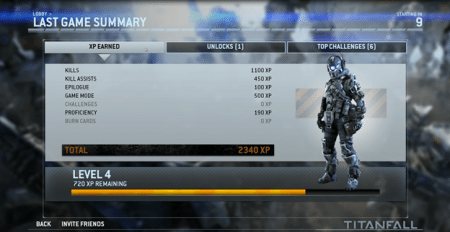 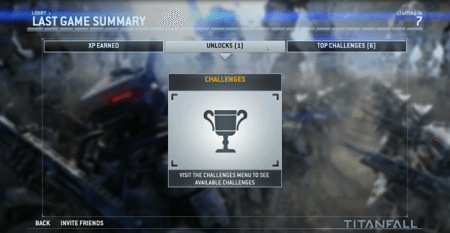 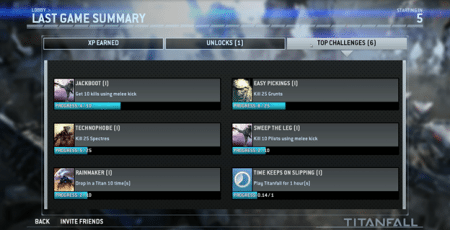 On to the next map

While the next map is starting up you can equip your character with weapons, armor and the likes that you have gained from Leveling up or other methods.  This next map, another Attrition mode map was “Assault on the Sentinel”, the map was named Overlook”.  In this map, you are in a military prison complex designed by the IMC as a staging area for imprisoning militia terrorists.

The game initially stared loading fine, but my mistake totally caught up with me and ruined my gameplay.  I was able to start the map just fine, jump out of my ship and start running to war.  I killed one, then got killed by another and then pressed tab to see where I was.  It looks like the scoreboard got stuck when I respawned and after hitting tab a few times to get rid of the scoreboard, LSD engulfed me.

Everything looked like I was on a bad trip, at least I was told this is how it was which made game play 100% unplayable.

This was late at night and I had to get up for work the next day so I had to quit without doing some more research that night to resolve the issue.

The next day I googled and googled, only the 2nd day the game was out and it was hard to find but I did find one similar report of an issue.  Others had recommended a few things to that person, one of which was disabling SLI.  Disabling SLI is not an option I would take, I have 2 cards to get better performance which I always have, and I am sure that is not the issue so today I will work on this a little more and see what resolves it.  I don’t mind doing this at all, at one point it was my job and I loved doing it, so this will be fun.

Now back to where I was going with the Multi-Player/Single Player aspect of this game.  In an interview with Vince Zampella from Respawn, he mentions that reason the game did not have a single player portion was because of you.  He states the following

“Really, you split the team. They’re two different games. They’re balanced differently, they’re scoped differently. But people spend hundreds of hours in the multiplayer experience versus ‘as little time as possible rushing to the end’ . So why do all the resources go there? To us it made sense to put it here. Now everybody sees all those resources, and multiplayer is better. For us it made sense.”

I obtained this interview from IGN @ http://www.ign.com/articles/2013/06/24/why-titanfall-has-no-single-player-campaign

Yes, from what I have played so far, there was a bit of a story, but nothing as detailed and as enthralling as in most single player games.  I am one of the seemingly few that like to play through a title, from start to finish and not skip any of the story.  I like to know why I am fighting; it gets me a bit more into the game.  Aside from that, the single player campaign allows you to learn how to use your weapons, special moves you may have.  Sometimes when you play the single player mode you earn a little extra something you can take into the multiplayer portion of the game, a bit of a thank you from the developers.

Aside from this one bug I found and the lack of a true single player mode, I had loads of fun and would recommend this game to anyone.

So enough from me, what do you guys think?  Those of you that have it, please chime in and let me know your experience with it and those without it; please feel free to ask me any questions.