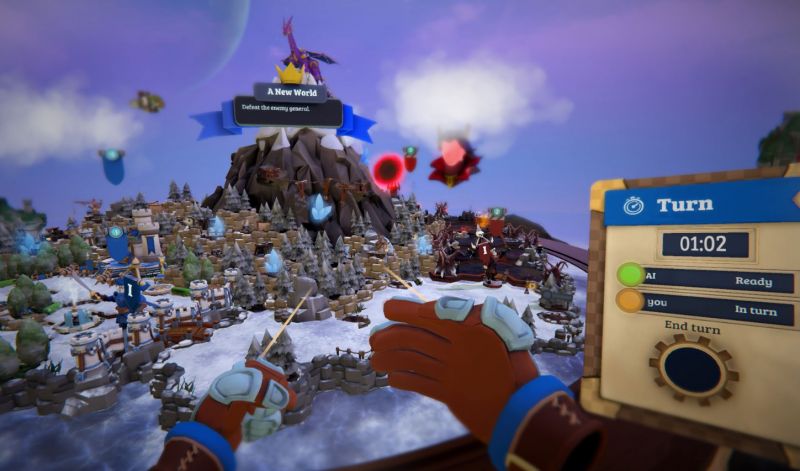 Skyworld combines classic turn-based strategy gameplay, deck building and fast-paced real-time battles in a unique strategy blend fully reimagined for VR. Build your realm, command 16 unique units including knights, snipers, catapults and even dragons, and directly manipulate battles to turn the tide when you find yourself in a tough spot.

Classic strategy gameplay reimagined for VR, from the creators of Arizona Sunshine. Skyworld is an award-winning VR game that combines accessible turn-based strategy and addictive real-time battles, all set in intricately animated miniature worlds. Build and command your forces right on the battlefield, conquer all Skyworlds and compete in online multiplayer. Plus, DRAGONS! http://skyworld-game.com

Founded in 2008, Vertigo Games is a game developer and publisher that since the start of the modern VR era has exclusively developed and launched full-feature games for VR. The company is best-known for the platinum-selling VR FPS Arizona Sunshine and the award-winning VR strategy game Skyworld. Upcoming VR titles include the VR puzzle adventure A Fisherman’s Tale and the PS VR version of Skyworld. http://vertigo-games.com

Wolfdog Interactive is a Dutch game development studio specializing in Virtual Reality. Founded back in 2014, the studio was one of the first companies to fully focus on the creation of VR entertainment games.  We use all our VR knowledge to bring you the most immersive and interactive experience possible, with games that are designed from the ground up for VR. http://wolfdoginteractive.com