A new Video Game Giveaway contest is being held by both Dragon Blogger technology blog and Metallman’s Reverie who have partnered up to bring you a unique contest where you get to win the Video Game that you want rather than a specific video game being offered. 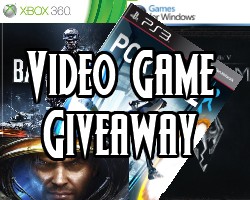 That’s right, you get to pick whatever video game you want that has a $59.99 or less retail value and we will buy the game and ship it to you.  It can be an Xbox 360 game, a Playstation 3 game, a Nintendo Wii game or even a PC Game or Nintendo 3DS game!

You tell us what game you want to win, and enter the contest below.  If you are selected as the winner (which is done randomly) then you pick the game and we ship it to you.

Everyone in the world is eligible for this contest, but if you enter from International we may transfer you $59.99 via paypal instead of mailing the game due to shipping costs exceeding value of game.

So tell us what video game you are hoping to win, Skyrim?  Battlefield 3?  Which game do you hope to get in late February when the contest ends?

Personally I would love to win [easyazon-link asin=”B001CWXAP2″]Star Wars: The Old Republic[/easyazon-link] if I were a contestant, how about you Victor?  Which would be your game of choice?

Content Creator/Owner of https://t.co/iWP6afuOc9 for Tech, Game, Entertainment and streamer at https://t.co/594fXMdMIA
The new AUFERO Laser Engraver and cutter with an upgraded laser is now 5% off when you use promo code RJ7MZX2U at c… https://t.co/Nm6gstjOcD - 5 hours ago