So I was just browsing on Facebook on my PC, and a video post came on my news feed. It was a creepy video of zombies banging on the screen trying to get out which spooked me real hard. Also, the other thing that I noticed was that there were desktop icons on the screen. Turned out that the zombie jump scare video was a live wallpaper. YES! A live wallpaper. This is a thing. So I immediately researched on how to get live wallpapers for PC and found out that there is a software for that on Steam called Wallpaper Engine.

Now, what is Wallpaper Engine?

It is a software which lets you have live wallpapers on your desktop. You can have anything as your wallpaper from 2D to 3D animations, videos and also interactive applications. You can even make your own live wallpaper if you have any animation or a video clip. Currently, the software is only on Steam, and it is still in Early Access and can be purchased for $3.99.

So if your system meets the minimum requirements, then your PC will be able to run Wallpaper Engine.

Time to check out the software itself.

As I said before, you will have to install Steam client on your PC. Once the software is purchased, you can view it in your software library. 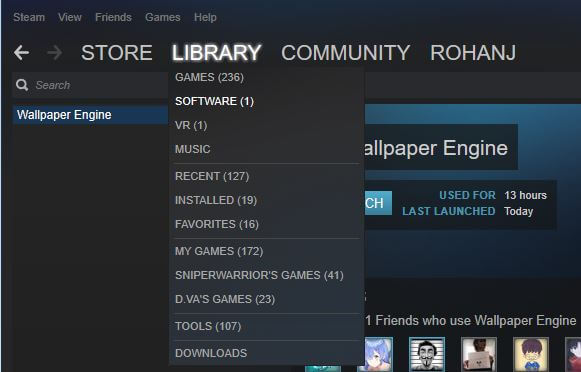 While launching, it will ask whether you want to launch it in 32-bit or 64-bit. 64-bit version might use more ram so choose the version depending on your PC specs. I have a good PC, so I am using the 64-bit version.

On the first time start up, you will be asked to input the settings.

In the general section, there’s the Start with Windows option. Tick it if you want your live wallpaper to be seen on startup. This may slow down your PC if you have a lower configuration. I didn’t have any problems with the startup.

Adjust Windows color will change the color of the taskbar and other windows UI according to the live wallpaper. You can enable or disable it depending on your choice. 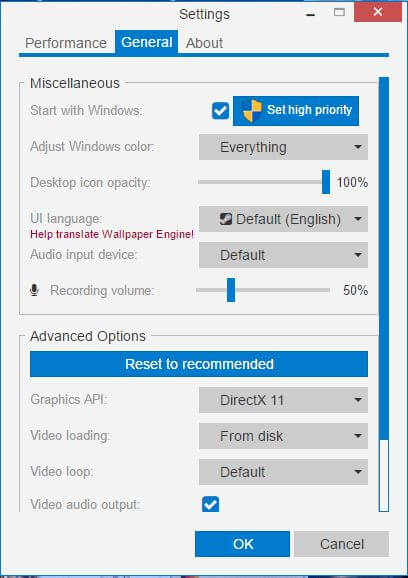 In the Performance section, you can choose whether you want the live wallpaper to pause or keep on running when other applications are maximized or are on fullscreen. Then there are 3 presets- low, medium and high. You can change it according to your PC specifications. 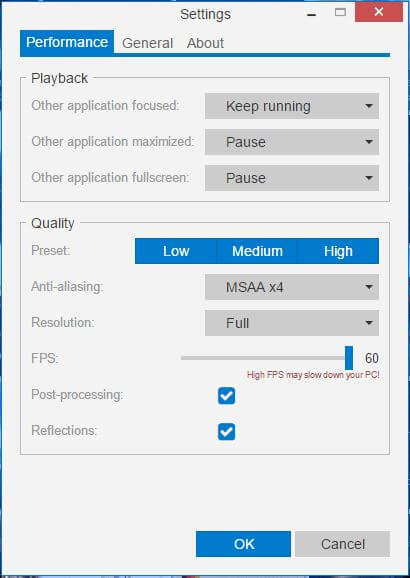 Now that we are done with the basic settings let’s apply some wallpapers. Applying a wallpaper is super easy. Just single click on the wallpaper you want and the live wallpaper is applied. 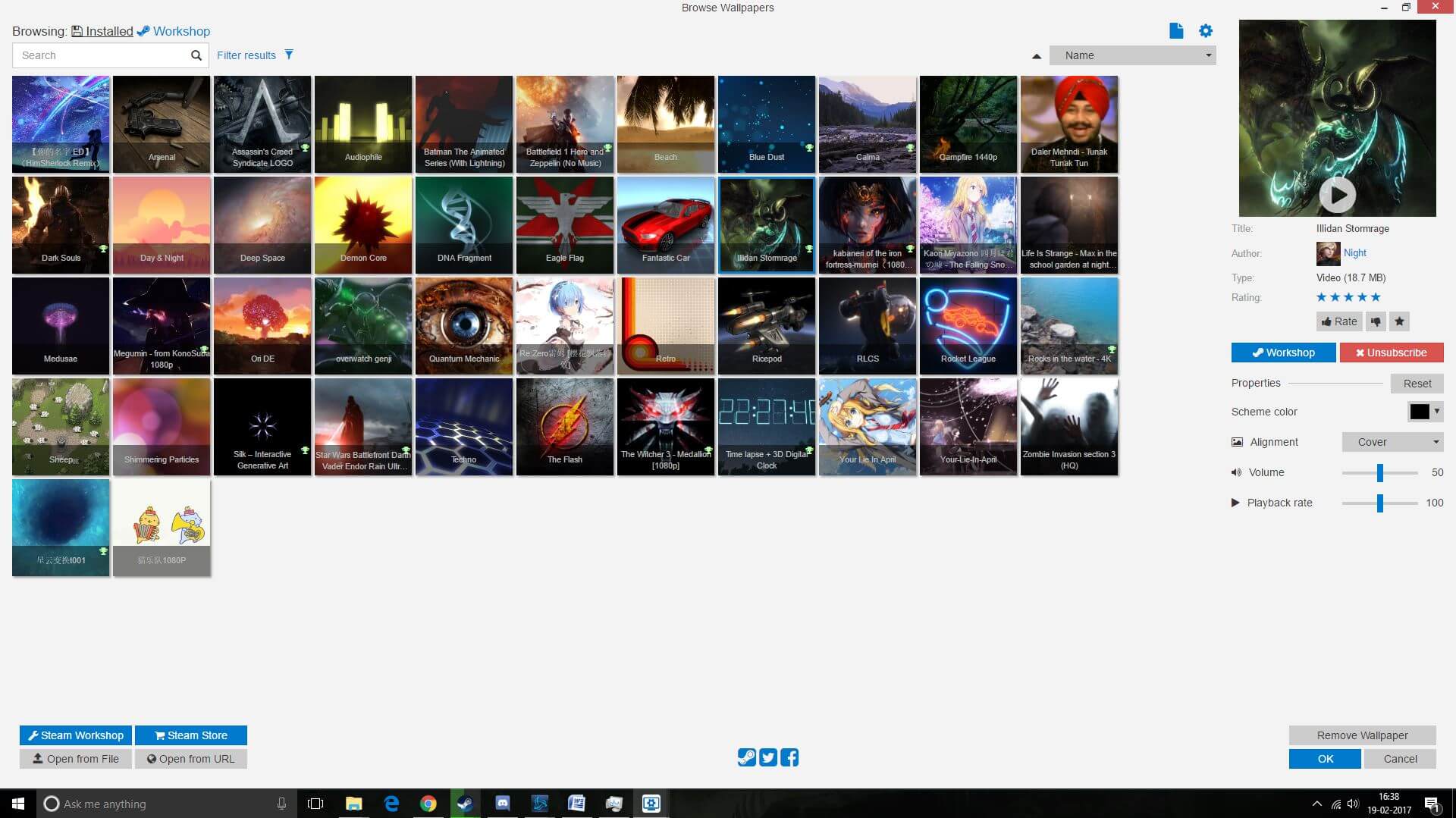 You can change the playback rate and volume of the wallpaper as well. 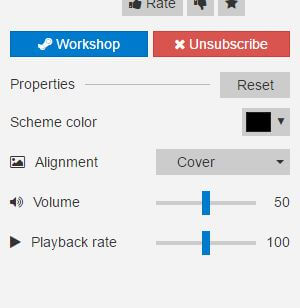 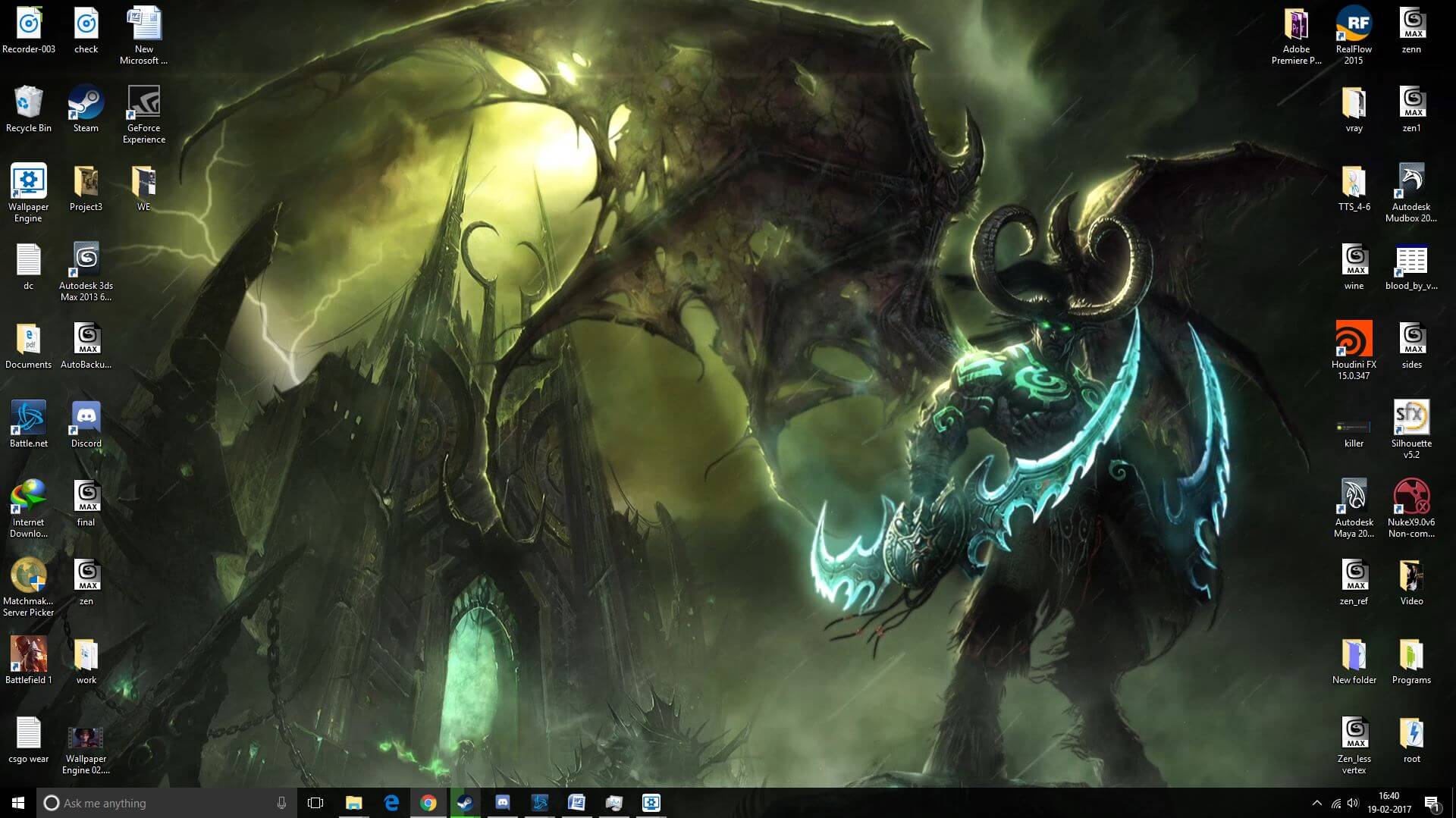 There are tons of amazing wallpapers in the steam workshop. Check out the video for a tutorial on how to download and apply wallpapers.

You can set up custom playlists so that a particular set of wallpapers play in a set period of time. You can have as many playlists as you want. A tutorial on how to setup playlists is given below.

Not only can you download content from other users but you can also make your own wallpapers with the Wallpaper Editor. I haven’t tried it but read a guide on how to create your own wallpapers. This is the guide link- http://steamcommunity.com/sharedfiles/filedetails/?id=768427357

If it’s difficult to understand, then I can make a tutorial for that. Let me know down below if you need a tutorial on the wallpaper editor. 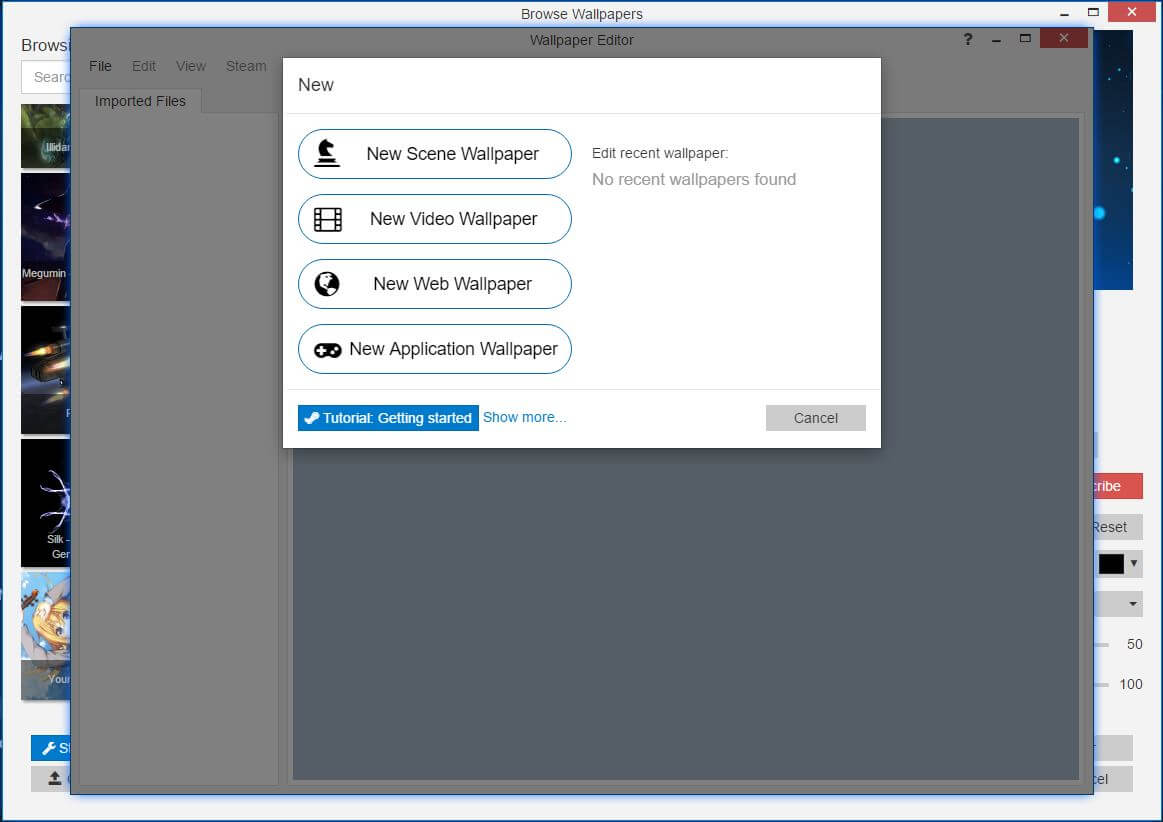 Here are some of my favorite workshop wallpapers that I found-

These are the links for the interactive wallpapers- 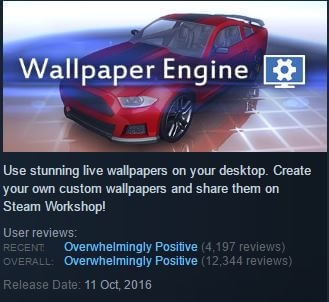 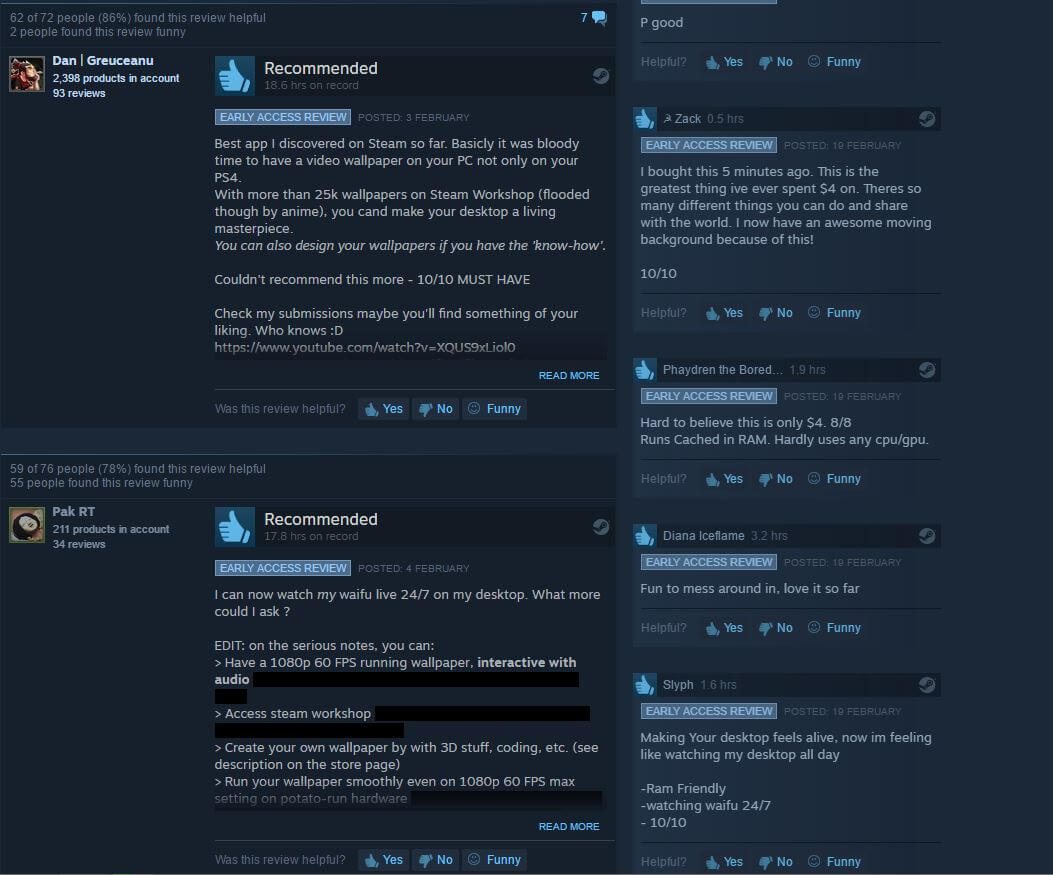 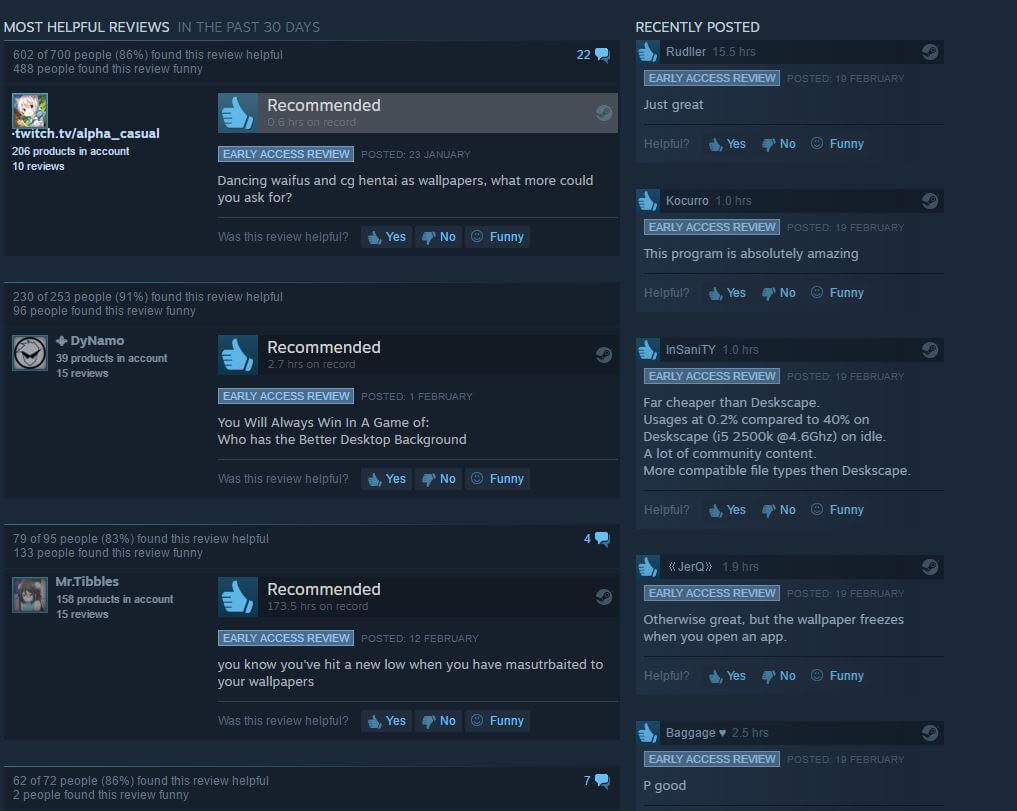 Here are some videos to show the Wallpaper Engine

Wallpaper Engine is a really amazing software. If you want your PC to look cool, then this is a must buy. With the Steam Workshop, thousands of new wallpapers are uploaded daily. I am really hooked up to this application. For a price of just $4, this is a steal deal. So what are you waiting for? Go and buy Wallpaper Engine and take your PC customization to a new level. Wallpaper Engine definitely deserves a 5 star from me.