Hi, I’ve been a big technology fan for many years; my first electronic device was a C-64 in the late 70’s. Since then I was hooked, Mac, Amiga, Pc’s, cell phones, you name it, I’ve owned it. At any one time, I have close to 15 to 20 gadgets around the house, even though my wife wishes I would get rid of some of them.  About a year and a half ago, I bought my first Kindle Fire, in fact, I bought 3 of them. One of the nicest things about the old Kindle was that it was so easy to use. Right out of the box, it was a short simple setup, and fun, fun, fun. Sadly, my wife’s and my daughters Kindle’s are gone, but mine is still working like a champ.

This year, my son gave us some money to play with and I thought, I’m going to try something different. To be nice, I won’t mention the brand, but it offered all kinds of bells and whistles. I was mesmerized. I saw all these extras as such a great thing that I ignored the fact that this particular tablet got poor reviews when it came to the screen itself. In fact, the screen was so troublesome that I spent an additional $50.00 on a Bluetooth keyboard/ mouse combo just to be able to use it. Even so, I still had to touch the screen at times, and it was one of those times that the screen split from top to bottom, and the tablet went crazy.

I tell you this because the experience was very important. You see, before my wife and daughter lost their Kindle’s, they had only one problem with theirs ever. The power connections died and we called Amazon, even though we bought the tablets someplace else, and within a few days we had a new tablet sent in the mail, very easy. The other tablet I bought, well, let’s say I had no luck with return e-mails, and they never ever answered the phones. I even had to call the main corporate headquarters just to return it to the store I got it from, and even then, I was only able to do an exchange.

In the end, I got a decent tablet, but one with far less quality than the New Kindle Fire HD. Now that’s not to say we don’t have one of the New Kindle Fire’s at the house, we do, and it is amazing. It is slimmer, has better video resolution, longer battery life, more features, and is everything you ever wanted in a tablet, especially the extra app storage. I got less than 2 gigs on the one I finally ended up with, even though I can add a 32 gig external sd card to it, I can’t use it for apps. To me, the ability to use your storage space is important.

When I look back at the purchasing decisions I made, I have discovered that there is no substitute for quality, reliability, and the dependability of the Kindle line, not to mention the flawless customer support. Don’t be taken in by the promise of something better, just because it has a few neat extras that make your eyes as big as saucers. I know what my next tablet purchase will be, and you can bet it will be a Kindle Fire Hd.

I recently decided to build a tablet stand using stuff I had just sitting around the house. Take a look at the picture. It took me only 10 minutes, and it not only works great, its fun to use too. 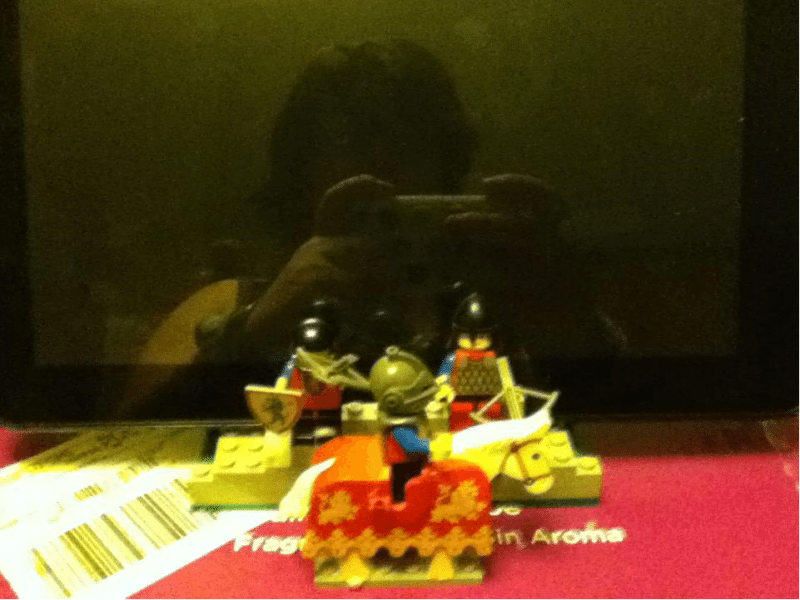