Have you ever been amazed by watching the wildlife documentary on Animal Planet? Have you ever wondered how hard it must be to film the animals in their natural habitat without disturbing them? Even though it is a challenging task, it is rewarding to watch the final results. Bad Comet – a small board game studio from Seoul, Korea – just released their latest Kickstarter campaign to stimulate this experience – WILD: Serengeti 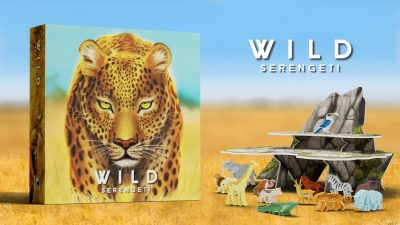 In WILD: Serengeti, players will take on a role as a director, whose mission is producing the greatest wildlife documentary in history at Sereneti, Tanzania. Over the course of 6 rounds, players will thrive to gain as much Documentary Score as possible. There are multiple ways to earn these scores, but the most common one is completing Scenery Cards, which are the main sauce of this game. There are three different types of Scenery Cards, and they have different requirements to complete. Most of the time, they are about specific animals, on certain types of terrains in a respective order. If the situations get out of hand, players can totally spend the resources to manipulate the outcome. For each Food token, a player can move one animal 1 space. While the Special Effect tokens allow a player to ignore one of the requirements.

The main drive for players to complete these Scenery Cards is the Reward. This is also where the set-collection mechanic of the game comes in. There are mainly 8 icons that players need focusing on. Each of them has its own unique way to calculate the Score. Some of them provide the Documentary Scores based on the matching Icons that players have acquired so far, such as Plant Icon, and Rare icons. Meanwhile, the Like icon provides Scores at the very end of the game based on the amount of Like player has accumulated. Another one is Animal Icon, which is an additional number of animals during the Award Ceremony. Also, the Scenery Cards can provide a one-time reward, benefiting players in achieving their tactics. These range from having Food Token, SFX token or gaining additional Scenery Cards. 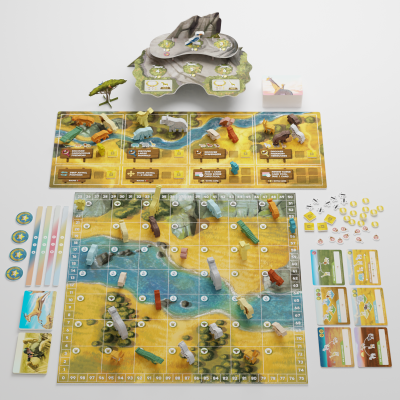 There are more to come. In the last few rounds, the game introduces Great Migration events. In these events, players will remove a certain amount of animals based on their locations on the Great Migration card. Since no one will know the pattern on the card, players can’t predict which animals will be removed. Hence, they will have to complete the Scenery Cards if possible, otherwise, they will have to try their luck. Along with the Great Migration events, there will be the Awards Ceremony as well. As mentioned above, this Ceremony rewards players if they have the most units of certain types of animals at the end of that round. In these events, players can use the Animal Icons of the same animal type as well. The game will end at the end of round 6, after the second Awards Ceremony and the third Great Migration event.

Even though WILD:Serengeti might look like a typical worker placement game, it is not. The game delivers a fascinating puzzle in the middle of the table. Usually, each player will focus on solving their own puzzle on their own player board. However, in WILD:Serengeti, players will be all working on the same set of puzzles. Expectedly, this welcomes a lot of conflict among players. Not only do players have to add more animals to match their Scenery Cards, but they also have to pay attention to ensure the patterns won’t be destroyed. In my opinion, this introduces a sufficient amount of interaction among players. This feature really helps everyone to engage in the game. 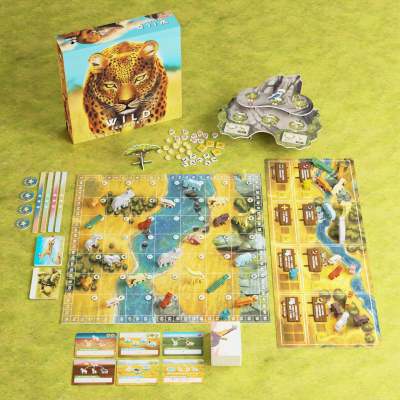 Another amazing feature that ensures players are in the game is the Worker Placement spots. These are not the first come first serve concept only. It is cheaper for whoever comes first. In other words, players are not forbidden from any action. They can perform and execute any spot as they want, as long as they have enough coins in hand. This leads to another subtle idea of how players have to manage their coins and resources well enough to execute their strategies. Moreover, by increasing the cost of executing the actions, the game indirectly pushes players to prioritize the tasks they want to complete. Does it make sense to discover Migratory Herbivores now? Should it be performing animal swapping first? What about a big large mammal ? These actions might be simple; but in the right order, they can execute a grand move combo.

Having backed two previous campaigns from Bad Comet, I fully trust the quality of their products. They are also very active on the campaign updates, especially about the manufacturing and delivering the products. I have no doubts that WILD:Serengeti will be another great hit from them. 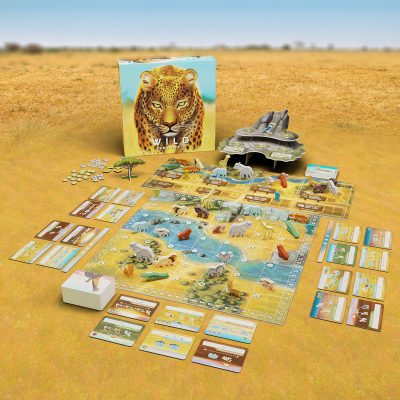 Here is the link to their Kickstarter Campaign. It will end on September 17, 2021.