We are back with the Years End Giveaway here at DragonBloggers and this time we are doing our last “Win Any Video Game” of the year where you have one last chance to pick up any game you have been looking forward to in 2020.  This is your chance to win the ever popular Cyberpunk 2077 (which releases before giveaway ends) or any of the newest PS5 or Xbox Series X titles.  As the newer console games cost $69.99 retail this grand prize has a value now of $70 instead of the previous giveaways where the prize value was $60 but that wouldn’t have been enough to cover the newer PS5 or Xbox Series X game costs, so I had to up the prize value to make sure it could include any base edition game for any system.  But you can pick any game for any system whether it is a gaming PC, Nintendo Switch, PS5, PS4, Xbox One…etc.

What game would you choose if you win?  Or would you just opt for the $70 gift card or PayPal so you can buy a bunch of games instead of a single game win?

Good luck to all who enter and thank you to Porphirios, LamerGamer, DollarYen and MomsBasementGaming for being my awesome co-sponsors who helped make this giveaway possible.  Make sure you give them a follow and let them know you appreciate them partnering with us to offer you this chance.

Watch live video from dragonbloggers on Twitch the winner will be announced LIVE ON STREAM New Years Eve on twitch.tv/dragonbloggers but you don’t have to be present to win.  That stream will have special giveaways exclusive to that stream only though so you may want to mark your calendar, there will be lots of giveaways that stream. 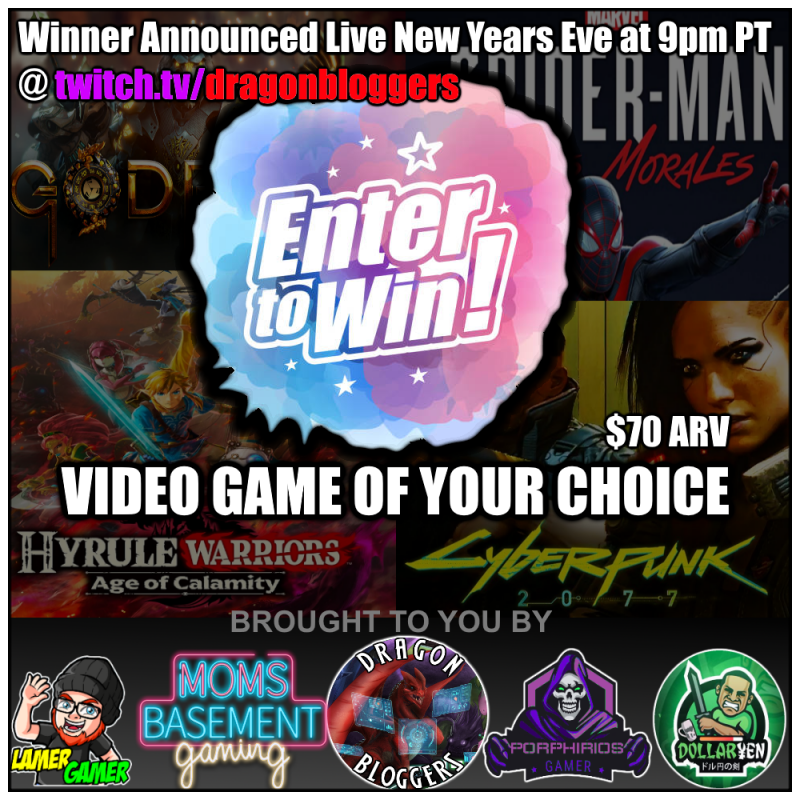 Enter to Win Any Video Game

At Years End Video Game Giveaway – You Choose The Game!