For some hardcore gamers, World of Warcraft on the PC and a decent collection of console games may be the ideal gaming scenario. For everyone else, a variety of game genres and learning curves make gaming fun, even if they do not have a great deal of time to spend doing it. Many independent titles are cross-platform games that are inexpensive and great for a variety of skill levels. What follows are ten fantastic indie titles that are available for Windows, Mac OS X, Linux, and, in some cases, other devices, such as the iPad and Nintendo Wii. 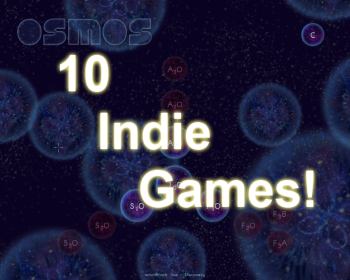 When you play Osmos, you may not be exactly sure what your character is, but you will not have time to figure it out, as you absorb other objects in an effort to “become the biggest”. Each level has its own twist, and players can additionally create random levels that present new challenges. Using its own mass and pure momentum to maneuver, the Osmos organism sometimes must survive and other times must dominate. In addition to computer platforms, it is also available for the iPad and iPhone.

Dark humor, stunningly eerie visuals, and physics-based puzzle strategy make World of Goo both pleasant to look at and engaging to play. To complete a level, the player must use goo balls to form structures, such as bridges, while also keeping enough goo balls alive to get them safely to a pipe to meet or exceed the level’s quota. World of Goo is available for major computer platforms and the Nintendo Wii.

Described as an “arcade shooter” Steel Storm will take you back to the days when mission objectives were simple and explosions were plentiful. In Steel Storm, gamers control a ship from a top-down view through a brilliantly designed 3D environment, with enemies and automated defenses at every turn. More than just a survival shooter, Steel Storm requires the player to find items, open force fields, and find a safe route to the portal exit. It is rich with customization features including an online multiplayer component.

Putting an interesting twist on classic gaming, Sun Blast allows you to control a 3D space ship using a Nintendo Wii remote. It includes a configuration utility for easy setup, and players can choose to hold the remote vertically or horizontally, both requiring motion movements to control the vessel. The graphics and sound effects of Sun Blast are impressive, and the gameplay is addictive. For those who prefer it, keyboard input is also an option. Our resident gamers at UK dedicated hosting company 34SP.com called this game “innovative and enthralling”.

Caster is a third-person shooter that combines elements of speed, action, and the acquisition of power ups in sprawling environments filled with deadly creatures. The player-controlled character is a young Mega Man-looking fellow with an arm canon and some serious speed and ups, once you get the right power ups. Along with cross-platform computer versions, Caster is available for the iPhone and iPad.

Probably the most unique title of all the games on this list, Aquaria is an underwater fantasy adventure that begins with cave exploration and then jolts you with its moments of action. The character, Naija might very well have split personalities, as she transforms from a pleasant fish-like mutant girl into a dark sea monster ninja girl with wicked powers. With full voice-over narration, a compelling story, and a 2D side-scrolling, visually rich underwater dream world, Aquaria is an indie treat. The game even includes a level editor, allowing players to create their own worlds, and an accompanying soundtrack available for download.

Like the motocross games of old, Mad Skills Motocross is a side-scrolling 2D racing and stunt game, but the levels are presented in 3D world and give players a variety of challenging tracks and power ups. It also includes a level editor, giving you the ability to create your own tracks and share them with your friends. With high-flying jumps, painfully graphic crashes, and a multiplayer upgrade in the works, this game is sure to be an indie classic.

And Yet It Moves has gameplay that is as unique as its name. While it appears to be an ordinary platform game, the character, apparently made of paper, exists in a 2D world that the player can fully rotate in either direction. Actually, to complete the game, the player must rotate the screen at times in order to reach certain points. To make it more challenging, if your character stumbles too far or gets hit by falling objects, he literally falls to pieces. And Yet It Moves also moves on the Wii.

Grappling Hook is a 3D game that doesn’t waste time worrying about stunning visual landscapes or engaging cut scenes. It is pure strategy and fun, and it is insanely addictive. In a Portal-style world, your character is the guinea pig for a far superior alien race that puts you through a series of mind-bending tests, equipped only with a powerful grappling hook that can attach to green walls. With a lot of swinging, jumping, and trial and error, you must complete each level, only to be presented with another twist. The full version includes a level editor for extended play.

Strange characters and uniquely massive worlds are both present in World of Padman. Making use of the Quake III Arena engine, WoP has completely modified Quake as you might remember it and created a world where blue smurf-like combatants blast each other in giant worlds with plenty of power ups, weapons, and high flying launch pads. This multiplayer indie gem includes tournament, free for all, team deathmatch, Spray Your Color, Big Balloon, and Last Pad Standing game formats. Best of all, WoP is free.

This is a guest post by Tavis J. Hampton who is a librarian and writer with a decade of experience in information technology, web hosting, and Linux system administration. His freelance services include writing, editing, tech training, and information architecture.