3 Minutes to Midnight is Scarecrow Studio ’s first adventure game with its development led by Jan Serra It is a classic point-and-click adventure game telling the story of Betty Anderson. Do you love unexpected stories and puzzling twists, as well as feeling of satisfaction that comes when you solve riddles – the harder they are the better? You can’t stop laughing at funny dialogues? You can’t get enough of the “give me more” feeling after you discover the last clue? Then you will love this game! Move around beautifully drawn 2D scenes full of details. Experience a very personal, complex, and interactive story driven by exploration and puzzle-solving. Meet the peculiar characters of this game, and find out about their background stories. Furthermore, there are multiple Easter eggs hidden in the game. Can you spot them all? 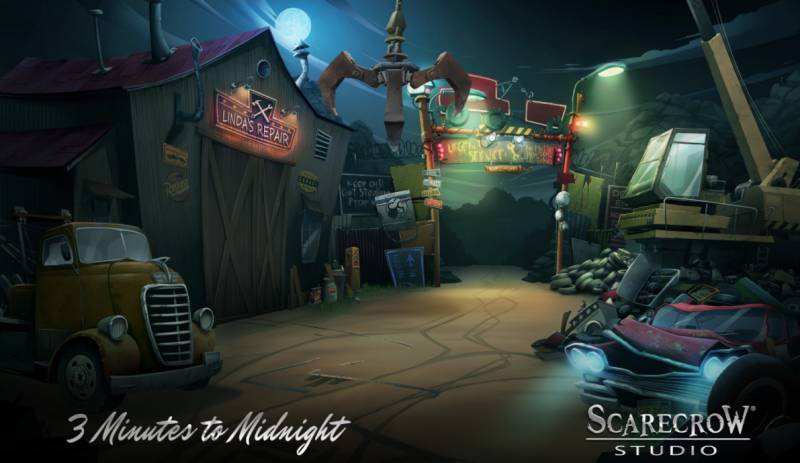 “It’s the roaring late ’40s. World War II has finally ended and celebrations continue… Yet, somewhere in the middle of New Mexico, a secret intricate plot to extinguish humanity has been unravelling for a long time. Even if it could be stopped, what hope is there when inexplicably, no one can remember a thing? Tonight, step into Betty’s shoes and find out exactly what happens at ‘3 Minutes to Midnight’. “

Imagine, if you will, being woken in the middle of the night by a deafening sound and the entire house shaking to its core. A scary enough thought in its own, wouldn’t you say? But what if you then realized you had no idea what year it was, where, or even who you were? Well, that’s the stuff of nightmares…

Unfortunately, if you hadn’t already guessed, this isn’t just some bad dream that you can shake off and drift lazily back to sleep. No, this is your heart sinking, gut wrenching, terrifying new reality.

A young lady, Betty Anderson, alone in the world and a stranger in her own mind, it now rests on your narrow shoulders to figure out what’s happening. Any thoughts you may harbour about running away, well, since you don’t even know where you are, where would you run to. Hmm?

Instead, let’s presume you’re made of sterner stuff and begin searching for an explanation. Maybe someone nearby will give you the answers you seek or even go far as to offer some insight of their own. Either way, you can only hope that whatever caused the ringing in your ears is the only thing that goes bump in the night…

Let’s be honest though, that’s not how these things tend to pan out, is it?”

More information
Scarecrow Studio is an independent game developer founded in 2016 by Jan Serra They specialize in publishing and developing video games for all kinds of platforms. Scarecrow Studio’s team is a passionate group of people that love creating point-and-click adventure games. They develop original IPs with special focus on rich plot, interesting characters with deep background stories, and high doses of humor. Their first game (soon to be released) is titled “3 Minutes to Midnight”.