Wombo is an application and site available on PC, Mac, IOS, and Android, that generates art using nothing but keywords, an optional genre of art selection, and its AI produces some rather interesting-looking results before spitting them out in you in a trading card format. Despite my initial guess that this would be something on par with the NFT art you currently see, it’s quite interesting to look at. So as a little experiment both to show you how the site works and for my own amusement, I’ll be typing in six famous horror movie antagonists’ names just to see what we get. Keep in mind, these are somewhat abstract, but given the nature of how it generates pieces, that’s to be expected.

Jason Voorhees, the slasher featured in every Friday the 13th after the original, is an excellent first subject to see just how well the AI reacts to some very clear, humanoid shapes. 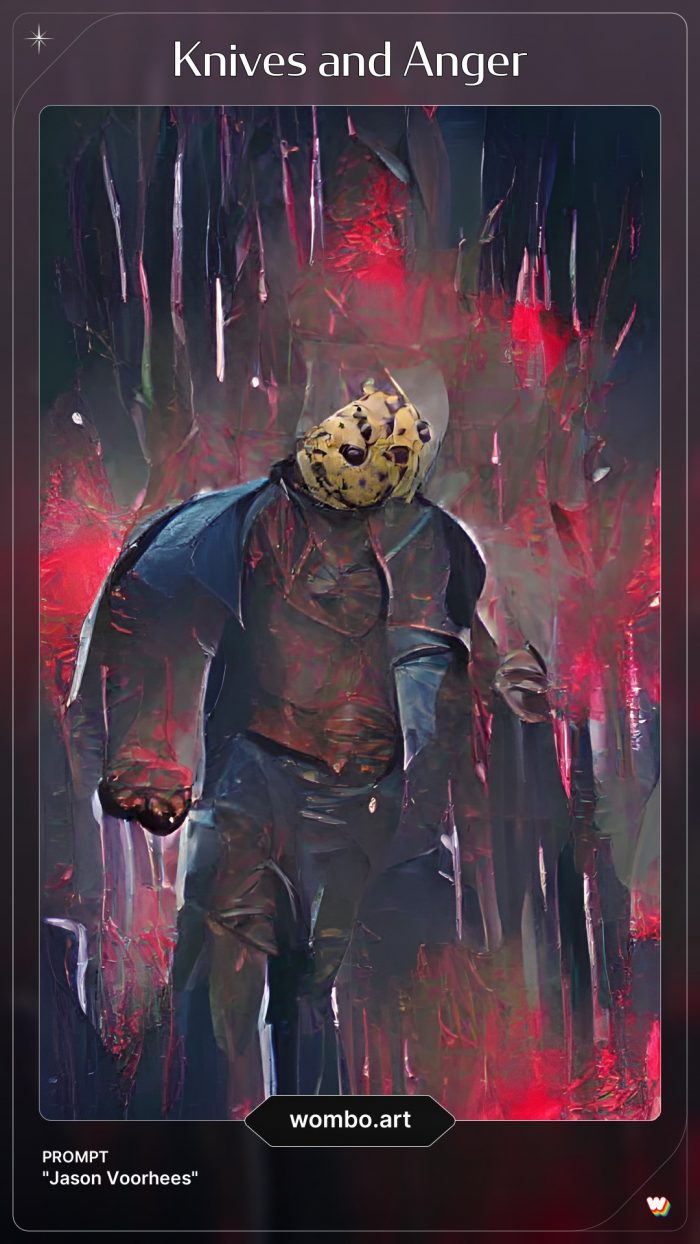 This is an interesting piece that both captures the spirit of the keyword extremely well and rolls with it. Not too abstract, but not too fleshed out. Extremely interesting to look at.

Another classic slasher villain, Michael Myers is the antagonist of the Halloween series. This is another test to see what it does when given a humanoid subject, and I’m quite a fan of the result. 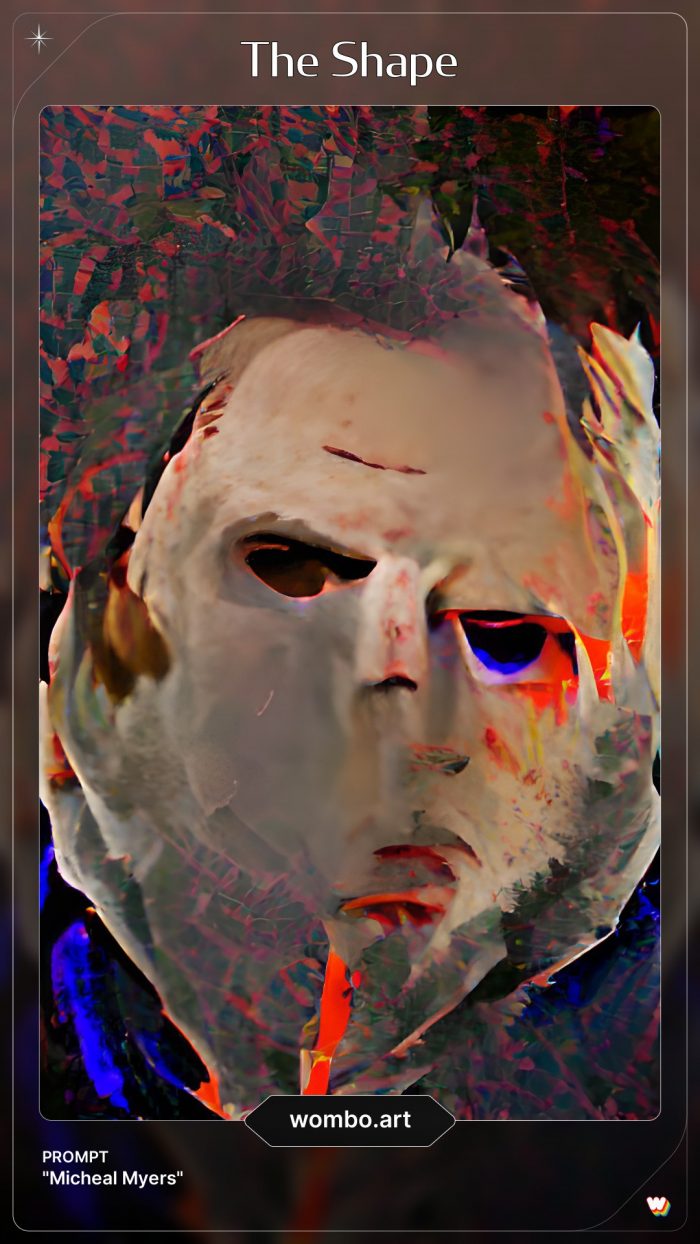 The Shapes classic Shatner mask makes up the piece. It’s quite haunting to look at, and generally marvelous use of the inputted keywords to produce something unique.

This time we chose a considerably harder to capture creature, both literally, and metaphorically, though I’d say Wombo did a surprisingly fantastic job of doing so. 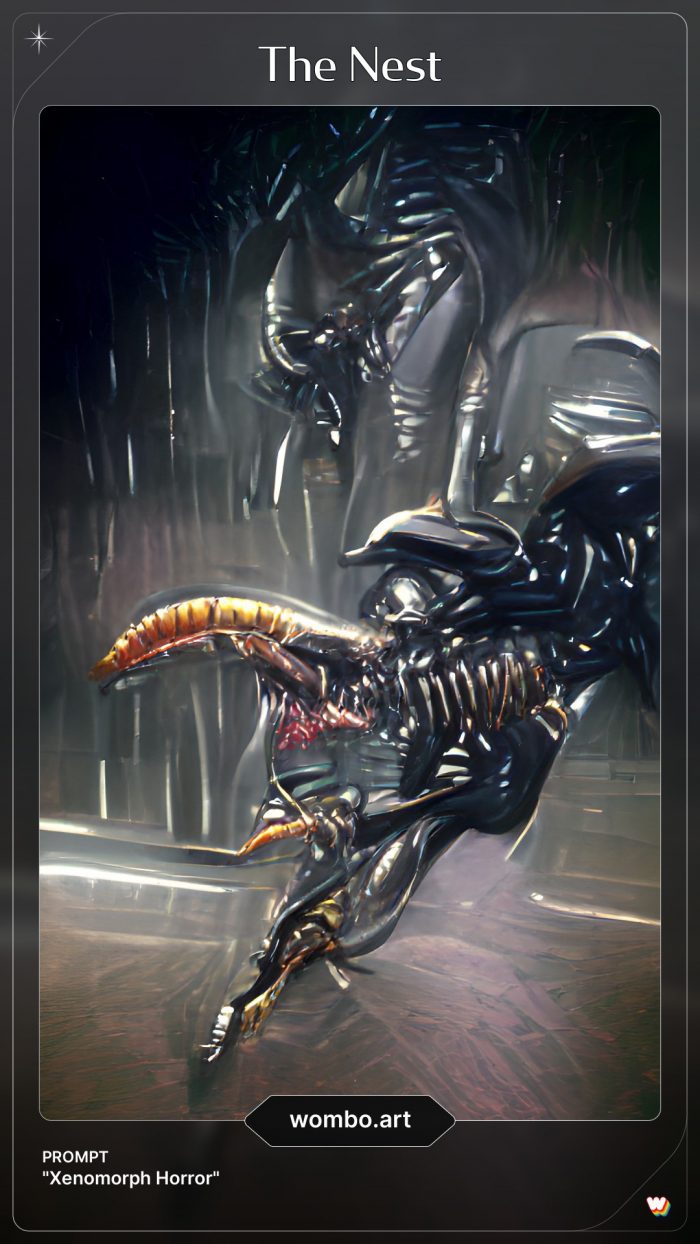 This is reminiscent of some of H. R. Giger’s more abstract works, and really captures the essence of a xenomorph despite its lack of proper form. The pearlescent, insect-like outer shell, sharp angles which communicate hostility of an alien species, all in all, fantastic job from Wombo.

This time we’re going considerably more abstract. The Thing is an alien recombinant organism that infects everything around it. Similar to The Blob, its aim is to absorb biomass, with the goal of using acquired DNA to blend in with its surroundings via imitating humans, but unlike The Blob, the absorption process is far more gruesome. 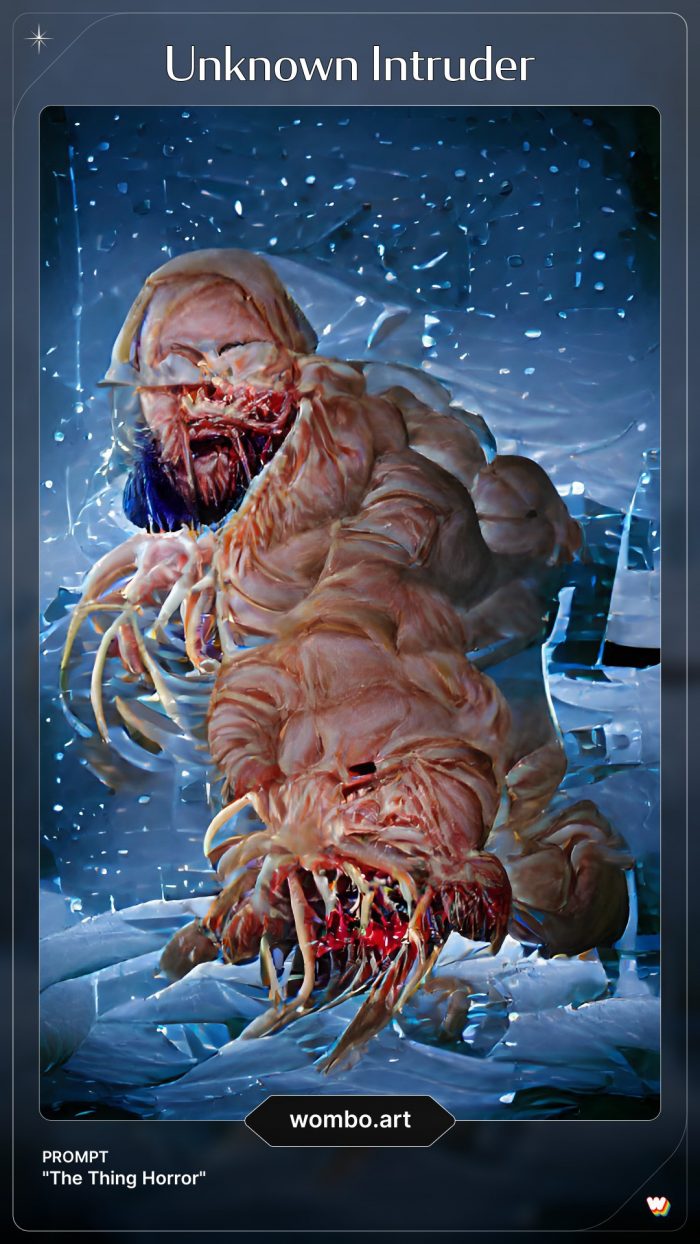 This piece is my absolute favorite. Not only did it capture the spirit of the monster itself, but the ’80s original was set in an antarctic research station, and what do you know? It’s surrounded by snow. Despite being a shapeless monstrosity, this piece of art actually has a solid form to its subject, albeit a fittingly gruesome one, if you squint you can see the look of terror on one of its last victims’ faces near the top of it.

Ahh, an absolute classic monster. The Blob has terrified audiences since 1958, with a wonderful, gore-filled remake in ’88. It’s an alien creature whose origins are unknown, crash landing on a meteorite with one goal in mind: Consumption. It’s mindless, unrelenting, and seemingly unstoppable till the end of each film when the protagonists realize it’s quite weak to the cold. 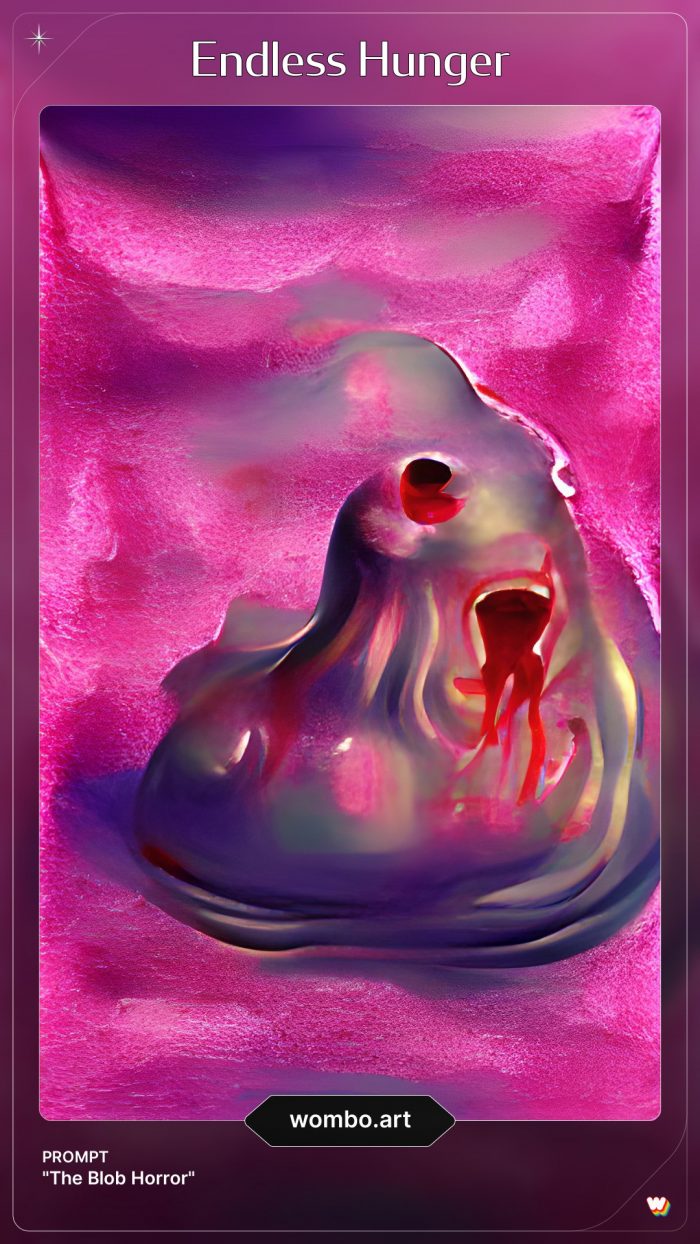 Unfortunately, this one isn’t as great as the other pieces, though it does still hold up, the blobs iconic pinkish-red hues still present, along with a bit of a gelatinous goo drop, though personally, I feel it’s lacking, but that’s the nice thing with Wombo. Don’t like the look of a piece? Try again. Inputting the same keywords will produce a unique piece of art each time.

We’ve come to our final monster, and boy it is a doozy. First portrayed by Tim Curry in the original TV mini-series, the terrifying creature masquerading as a friendly clown received a full-length feature film adaptation with a follow-up part the year after. He’s an otherwordly being haunting the town of Derry in Maine, responsible for everything from strokes of bad luck to child abductions, along with countless murders, all to feed and sustain itself. 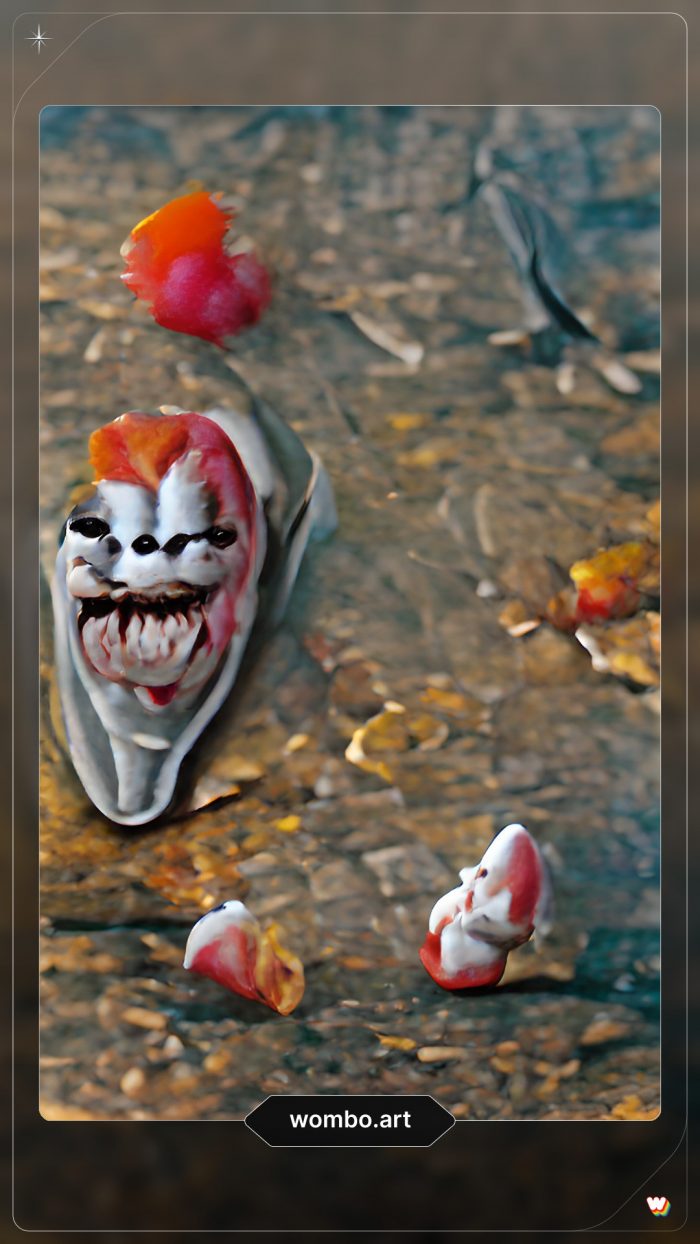 This piece ended up extremely abstract yet quite unsettling to look at, almost as if the beady, arachnid eyes are staring back at you. It’s as if the AI took the clown portion, the spider portrayed towards the end of the movie, and fused the two, with a cracked and worn street as its backdrop.

While AI-generated art gets a bad rap due to the recent NFT craze, you can produce some extremely interesting to look at pieces with Wombo, it’s entirely free, and frankly would make at the bare minimum, an interesting time killer. It handles your keyword inputs quite well and keeps the piece relevant to what you’re looking for, in some cases extremely so. My only dislike is that I can’t get full-sized images as you can produce some surprisingly beautiful art that would be worthy of display as a poster, or even a framed piece. Did I mention this was all free? Absolutely worth looking into.