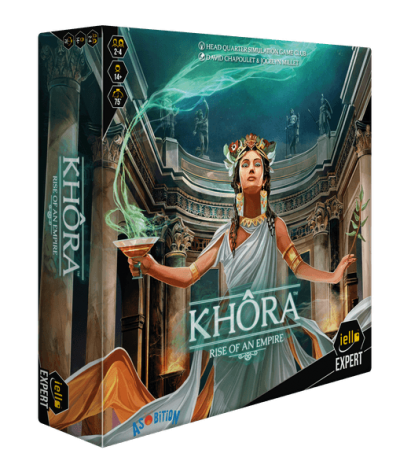 In Khora, each player is the head of the ancient Greek city empire. Each turn, you perform 2 of 7 actions, combined with the dice rolling mechanism to create an effective strategy to grow the empire
– Philosophy
– Legislation (Law)
– Culture (Culture)
– Trade
– Military (Military)
– Politics (Politics)
– Development (Development)

In addition, the player must choose to develop the city in favor of aspects such as Economy (promoting Taxes to help collect money), Culture (getting Knowledge) or Military (taking Soldiers to explore, fight for glory). Moreover, the empires (players) compete closely with each other to win titles and medals for themselves. Finally, after 9 rounds, the empire with the most points and the most optimal development will win 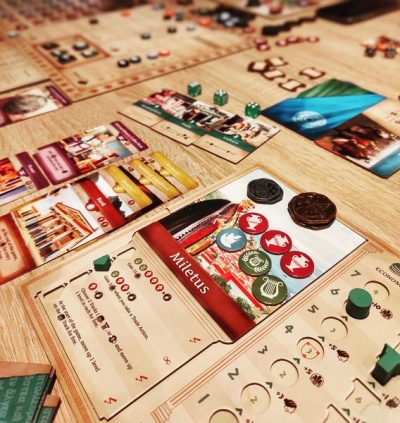 Khora takes place in 9 rounds, each round consists of 7 phases:

A. Event Phase: Reveal event leaves. These cards will offer quests that, if successfully completed, will be rewarded in the F . phase
B. Taxes: The player receives the corresponding money on the tax bar
C. Dice
– At the beginning of the game, the player will have 2 dice, which can only be rolled 1 time per round. The player with the lowest total value will go first.
– Choose 2 action plates out of 7 (values ​​from 0-6). Place each rollable dice on each plate. If the dice value is greater than the action plate value, the player is allowed to take that action. If the value is lower you can make up for it by reducing the corresponding amount on the Citizen bar compared to the difference

D. Action
Details of action plates:
0 – Philosophy: get 1 philosophy token
1 – Legislation (law): get 3 workers, draw 2 legal cards, keep 1 and discard the remaining 1 to the bottom of the stack.
2 – Culture: get victory points corresponding to the stats on the culture bar
3 – Trade: get 1 more money than the economic indicator. Then buy 1 Knowledge with 5 coins
4 – Military: get the number of soldiers corresponding to the civilian stats. Then perform 1 discovery action.
5 – Politic: use 1 of the political cards in your hand, some with an immediate, permanent function, or earn extra points at the end of the game.
6 – Development: unlock new functional upgrades in your city (each player has a different function for each city)

E. Progress
Each player is raised 1 stat 1 in 3 bars Culture, Military or Economy.

F. Event resolution
In this phase, if the player completes the event’s mission will be rewarded, there are some events if you don’t complete it, you will be penalized.

G. Achievements
Some achievements in Khora:
– Get the first 10 victory points
– Get level 12 on the Citizen bar
– Reach level 6 on the Troop bar
– Be at level 4 on the Economy bar
– Use at least 3 Politics cards 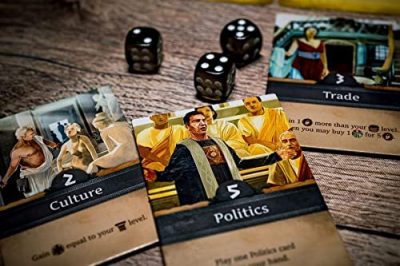 Khora took me from one surprise to another, from the duration of the game, the quality of the components, the rules of the game as well as the game flow. Everything is better than I expected

– The composition of the game is too good quality. The most impressive is probably the dual-layer board of each player. On the board there are not only tracks of three different stats (Economy, culture , Military) but also a slot for the player’s city. For me, this is a very creative thing. Players can easily install and install in the city, as well as know what level their city is in.

– The playing time of the game on the lid of the box is exactly 75 minutes. Not in a period of time anymore, but exactly 75′. It sounds ridiculous at first, but the more you play, the more it makes sense. The actions are very clear, not too cluttered and not too complicated. Having more players doesn’t affect playtime either. Most of the action everyone acts together, not waiting for each other, so more or less players do not affect the playing time.

– The rules of the game are simple, and very receptive. The book explains very well with examples of each stage and how each action is done and required. In addition, the icon system is uniform, helping players access the game easier. The icon system is easy to do but not everyone can do it (great wall is an example)

– Game flow is smooth enough. The most surprising thing in game flow is the use of dice for the actions. This is the player’s biggest challenge. To perform multiple actions, the player must roll an additional dice. But adding dice does not mean doing the desired action. Adding the dice only increases the probability of taking higher value actions, not a guarantee of doing those actions. 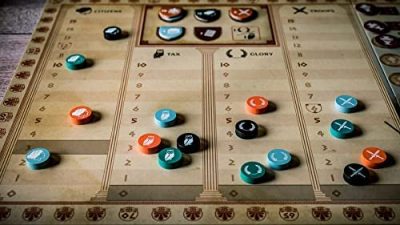 – A slightly negative impression is that the game is a bit short. Sounds like the opposite of the above right? Short here is not a short playing time, but a feeling of enjoying the accomplishment of being too short. The feeling is similar to when you start to get used to the job, the boss changes projects. If you have played terraforming Mars, you will understand the feeling when you have just got the engine you like, the girl you have a crush on with the love of planting a tree and the end game 🙂 khora will give you a similar feeling of Misery. It took 7 rounds to build the engine and in one shot, the 9th round ended the game. I’m fine!

– The action depends on the dice too much. One of the games that best mitigates dice risk is Castle of Burgundy. Not only for a wide range of systems that give players many options, but they also support each other (synergy). Unfortunately that was not enough in Khora. Players can still use citizen to increase the value of the dice, but there is no synergy between tracks.

– The game is quite multiplayer solitaire. The main interactions of the game are mostly indirect interactions between players. Even in the race mechanism to get rewards, players can also reach the finish line at the same time. As for the discovery part, it is first come first serve, whoever comes first will benefit. There is almost no direct interaction with the players.

You can purchase Khora at this link