Do you use more than one monitor? If you do, you know just how much of a space saver it is and just how cool your desk looks. I usually have my school web site opened on one monitor, and a word processor open on another. It is a very useful convenience.

One thing that I have noticed is under windows only one task bar has the clock on it. If you are looking at the monitor without it, you have to glance at the other to tell the time. Not only that, but if you have anything open, like the web page and a word processor, then they both show up on each. To me that was not so bad until I had a chance to make it better which was done while testing Actual Tools software called Actual Multiple Monitors.
Actual Multiple Monitors by Actual Tools is a software program that will let you make changes to your computer so that you can get the most out of a dual monitor set up. Take a look at the picture below, and you can see several things I have pointed out.

If you notice at the top of the window opened on the largest monitor, there are a few extra buttons that are placed there by Actual Multiple Monitors. The most interesting one is one I never considered needing but now that I have the option, I wish I always had. One feature in Actual Multiple Monitors is this new button in the top right and the button allows you to mirror the open window. So what, right? What’s the big deal? Well, let’s say you open a folder that has other folders in it along with loose documents and other files. You want to clean up the folder and organize it so you open it, open a sub folder, then go back to the first folder in another window and have it open to the root folder and move files around. Or, you click the mirror button and it opens a copy of the folder in a new window instantly. This is a convenience I did not know I needed but plan to use in the future.
Another really nice feature is that you have the date and time on both monitors. Now my task bars are complete. Additionally, if you notice there are some things showing on one task bar but not the other. This reflects which monitor the file or folder is opened on. I do like this although at first I thought I had closed something as I was used to seeing it one both. There is also another cool feature, and that is that you can instruct the software to always put this file, folder, or application on one monitor or another so that when opened, you will not have to drag it from one monitor to the other, which was very nice!
The program does have a few features listed that you can find in Windows already but, instead of going all over the place to access them, they are all right here at your fingertips in one location. One such thing is wallpaper. You can set it to use separate pictures, the same picture, and so forth. The coolest thing is being able to use a screen saver on both monitors. (Too many times I used a built in screen saver that only runs on one screen.) 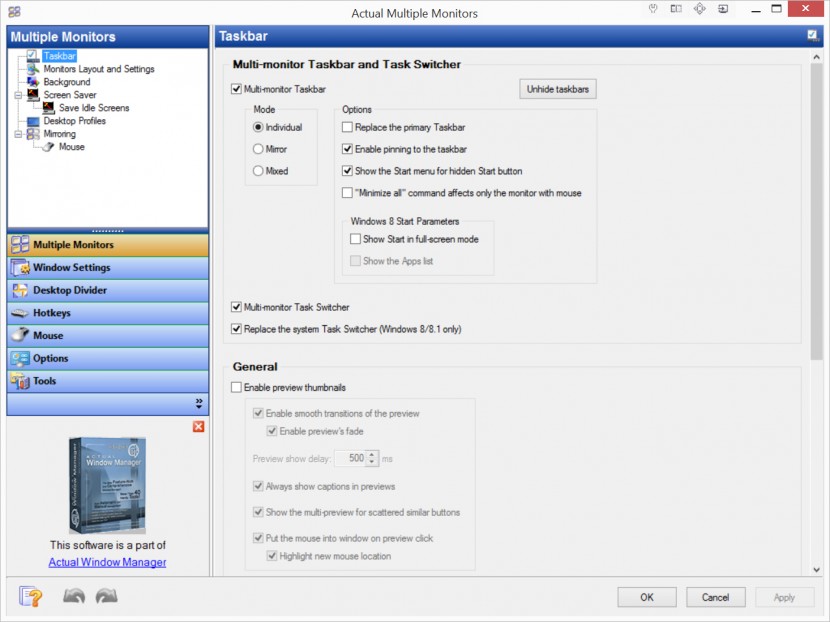 There are so many other things that this program fixes. One off the top of my head is when you open (formerly known as Metro) apps, and then switch back to the desktop. Sometimes the app is still running, and normally you can move your mouse to the lower left hand side of the screen and a bar will show with those running apps on it. I have noticed with dual monitors, I have not gotten to do that, especially on the second monitor. This program allows that to happen and now I can close them if I needed them and forgot to do so before switching back to the main desktop.

There are many other conveniences and features that can be set up, I have not tried using them all yet, but the ones I have used so far are awesome.
I will be honest that when I was first asked to review this software, I was skeptical. I honestly thought it was not going to be anything I would want to keep on my computer, but after installing it and discovering many other features and changes it has made to my screens, I can definitely say it is here to stay and one that I will use for years to come. (I only have tried the default settings so far, and love it.)
If you desire to have more control over the layout of your multi-monitor system, and have more power at your fingertips, this is the program for you. Actual Multiple Monitors by Actual Tools will soon be an indispensable asset you won’t be able to do without.