As you are sipping your daily dose of luxurious foamy espresso, you receive a decrypted message via a secure channel. The Director of the United Nations Intelligence Committee has informed you that hundreds of Secret Government Spies have been disappearing and nowhere to be found. If they are lucky enough to be found, they turn up dead. Due to the urgency of this issue, the Director is putting a team together, to fight against the world’s most notorious evil mastermind, Dr.Lobo. “The task shall be challenging and dangerous” – the Director warns you. The agency finds out that Dr.Lobo also has been recruiting and putting together his own force, the world’s deadliest henchmen – SMERSH. Not only do they pledge to bring “Death to all Spies”, but also they will help him to take over the world. They shall remove anyone that is one their way,  as you scroll down the tablet, you recognize all the familiar faces; of whom are, or actually, used to be your colleagues. You start feeling your grudges. Your jaw is clenching. Your anger is pumping all the blood in your veins. You know that you have to keep a cool head, to accept this mission and save the world. Fortunately, you won’t be alone. “We will support you with whatever we have, from Intel, Spy Gears, Tech and so on. Our agents hiding in the field can still support you with more Intel” – the Director stated. That’s all you know to know. No more single second should be wasted. You press the button to accept the mission.

Welcome to Agents of SMERSH – Epic Edition  board game.

Players will play the role of one of the best UN spies. Each spy has different traits and Advanced Skills. Players need to understand and strategize their approach to the game based on their character. For each round, each player will take one turn at a time to move and have Encounters across the world. After stopping at a certain place, players will draw one encounter card. There will be multiple Roptions for the encounter. You will have to pick one of the outcomes before rolling the Fate Die. You will need to locate the right narration provided in the book. You can use your Skill Dice and Advanced Skills to overcome the negative result of the encounter. Passing an encounter will gain valuable resources, such as new Advanced Skills, raising Skills, acquiring more gadgets, or collecting more Intel. 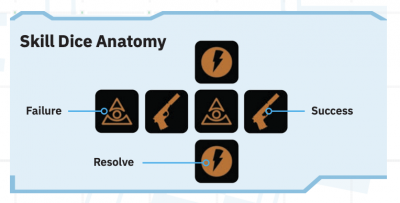 Skill dice to resolve the Encounter

There will be a lot of hassles if you fail. You might get hurt, lower your skills, or advance the Dr.Lobo track. This is where you need to be cautions. If Dr.Lobo advances too far, you will face him instead. You can also weaken him by taking down his evil force first. In order to locate where these henchmen are, you need to acquire a certain amount of Intel – which is the reward from Encounter. As a side note, losing to henchmen is not the end since they will show up in the ultimate face-off as well. The winner of the Epic Showdown is also the winner of the game.

From the first glance, Agents of SMERSH – Epic Edition features a lot of replayability. Thanks to the amount of creative scenarios / outcomes in the Encounter and the Epic Showdown book, players will experience each game differently. At the time of writing, it already includes over 2000 narrative story encounters. In addition, the game also features “Choose your own adventure”, where players can have alternate findings and paths. This will create endless alternative paths each time. Moreover, players can invite at most three more people to join him/her in this battle. More players mean more unique powers and abilities. Hence, players can strategize together to minimize the casualties and defeat Dr.Lobo. At last but not least, the game features very sleek, modern looking illustrations and designs. Even though this doesn’t change the game play, it does have the first impression for players. 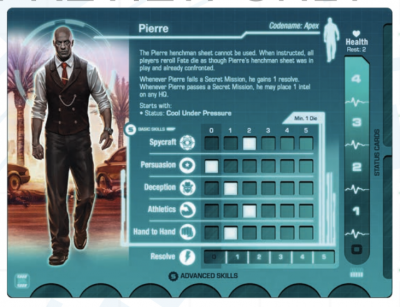 Agents of SMERSH – Epic Edition will surely satisfy the majority of the RPG community since there is no need for the gamemaster. This is also an outstanding masterpiece that has a Spy / Adventure theme, that does not involve bluffing or lying against each other. Are you ready to answer the call to face-off Dr.Lobo ?

The game will be available on Kickstarter till Wednesday May 19th, 2021. Here is the link to the campaign.