Recently we were sent the Olafus 60W LED Work light to showcase how well it worked for us, Merl was the one sent the product and took us through the unboxing, setup and showcasing just how bright a single 60W LED work light can get from the Olafus brand which happens to make a lot of different lighting products.    Some things to know about this work light from Olafus is that they advertise that their 60W LED which is 65 individual bulbs that produce 5000k temperature light at 6000 lumens are the equivalent light output of a 400W traditional halogen bulb but use 85% less electricity than an equivalent halogen bulb. 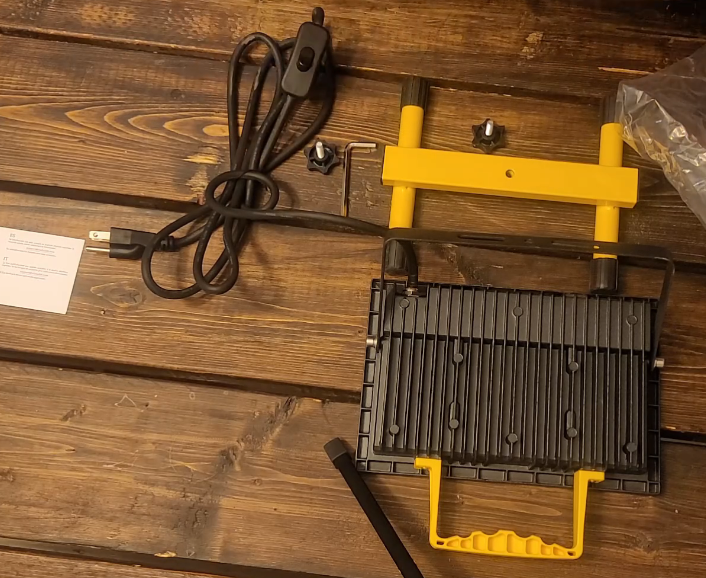 Watch the Video Unboxing and Review

The high powered LED work light also has an IP 66 water proof rating which means it works even in snow, rain and in both hot and cold environments without issue.  The LED is advertised as having a lifespan of 50,000 hours which is the equivalent of 10 hours a day for 13 years and there just is no way we could validate duration and longevity claims but holy cow that is a lot. The light does cast a 120 degree beam and it has an adjustable knob which allows for easy positioning of the light.

The Olafaus LED Work light also features a carry handle and you can detach the base as well, so it is portable and easy to carry.  The power cord itself is about 66 inches in length, and the brand did make an 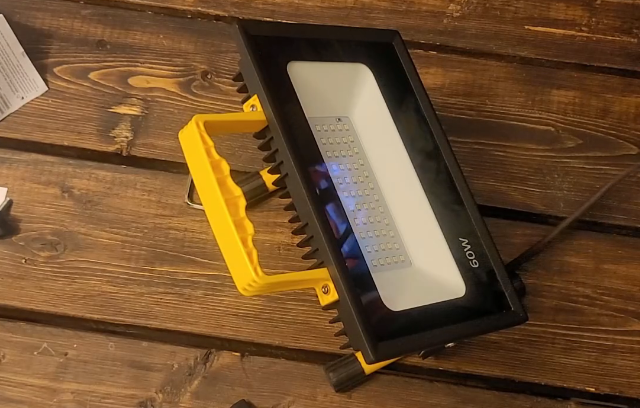 Merl’s thoughts on the work light from Olafus was that he was very happy with the tempered glass front and the clear panel feels solid and likely not to break easily. Though he would recommend getting some liquid glass to coat the front of it for a little extra protection. The metal frame on the back gives it some heft and makes it not feel cheap. You are probably paying a couple extra bucks for that ‘feel’ but it is worth it over a plain plastic back. The light is VERY bright and the box says 6,000 lumens and I believe it. The stand was super simple to assemble but might be a touch gratuitous. If they slightly extended the swing arm that the yellow part mounts to and added some rubber footies it could work just as well and store better. 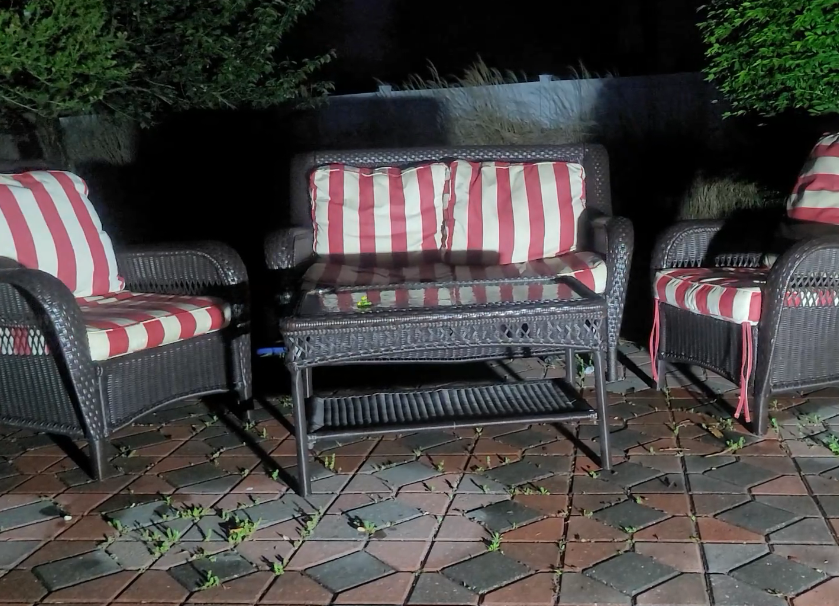 About the biggest complaint is that the cord is kind of short but that is easy enough to fix with the extension cable you likely have in the garage where you are probably going to be using this and the fact that the power switch is in-line and worse it is not close to the work light base itself.  I personally don’t like in line power switches. However, if you must put the switch on the cord put it closer to the functional end (the light in this case) vs the outlet.

The work light does have what they call an innovative fin type heat sink design, which is to dissipate heat more efficiently out the back of the work light. When testing with my hand to see how hot/safe it is, the metal plated fins after 10 minutes of use are very hot. They dissipate the heat very quickly so if you touch the fin you have 2 seconds before your hand heats up to the point of not safe (or at least it feels that way). However, less than 1 inch off the plate you can not feel the heat at all so I would say that the sink works great just don’t let any thing lean or touch the plate itself while it is on.

The Olafus LED Worklight claims to operate in temperature ranges from -77 degrees F to 104 degrees F.

Overall this would be ideal for working in a garage, on a computer build, on your car or anywhere you need a high spotlight beam work light and a lot of illumination.  It works outdoors, indoors and every where in between.  I was even reading that some people use these work lights to grow orchids too, though I didn’t test trying to grow orchids with them.