The family movie Alpha and Omega had all the right elements to be an entertaining kids movie but lacks depth and had too much innuendo to make it as a top animated film. 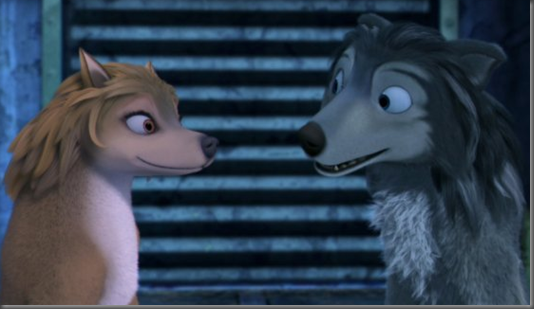 The movies premise is familiar, there are packs of wolves West and East as well as Alpha’s and Omega’s in the pack.  The movie revolves around two easy to follow stories and one is the dispute between the packs and territory, the other is about an alpha female and omega male being taken by park rangers.

Alpha and Omega stars the voices of Justin Long as Humphrey and Hayden Panettiere as Kate a pair of wolves who are sedated and transported to Idaho to repopulate the wolf species and this is one of the problems with the stories for kids.  The movie mentions so many times about repopulation, implying that Alpha’s and Omega’s can eat together, but can’t “Howl” together.

Howling together being the synonym for coupling in the movie and when the wolves howl they sing in harmony together and match voices in a similar fashion to Happy Feet.  Unlike Happy Feet however there is very much a sex undertone to the movie that I felt was overdone for the target audience of 4 – 9 year olds.

The humor in the film is enough to entertain a little kid but lacks some of the clever wit, parodies and spoofs to keep parents overly engaged.  The film has some enjoyable moments like when the wolves encounter bears, and Humphrey and Kate get to know each other better.

The animation quality is good but not great, I found it better than Open Season but not nearly matching Pixar or DreamWorks in style.

My kids liked it but even they thought it was only a mediocre film and they are three and six, both kids said there was too much “love” in the film.  (Of course, they are boys and girls may like the film more for the romantic reasons).

Dragon Blogger gives Alpha and Omega this film 2 out of 4 stars.