The Apple MacBook Air has been one of the thinnest laptops currently available in the market, and there has been absolutely no competition for the MacBook Air, which could atleast come close to the sleek and stunning looks. Though the Air was the best in the class, it still did have some limitations which includes limited number of USB ports, lack of high processing power, absence of a back lit keyboard.

Its been nearly an year since the last version of the Air was launched and rumours have been doing the rounds of an expected launch of a whole new refreshed range of the MacBook Air line-up. And the rumours turned to be real, with Apple getting ready with a huge stock of the MacBook Air which will be shipped at the end of July or August. 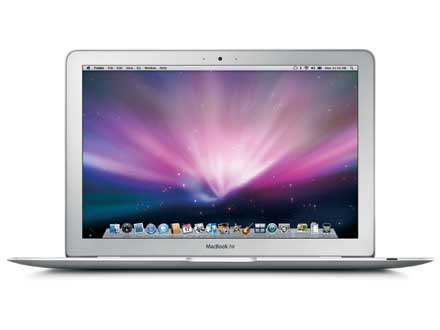 So what can we expect from the new sleek laptop from Apple? The confirmed specs include the inclusion of Apple’s trademark Thunderbolt I/O technology, new Sandy Bridge processors and of course the brand new Mac OS X Lion pre-loaded in the Air.The new laptops will aslo be available in two models – 11 inch and the 13 inch versions.

The MacBook Air never came with a back-lit keyboard, probably due to the thin profile which never enabled it to include but we are expecting Apple to include one with the upcoming ones.

So what features are you expecting on the new Apple MacBook Air?