ARCTIC was kind enough to send us a pair of the P614 BT Bluetooth Headphones to review and I would have to say that I am very glad I had the opportunity to test out these comfortable and really high quality headphones.  I will first come clean and say that the first unit they sent us to review had tons of pairing problems with both PC and the iPhone, stuttering dropping Bluetooth and I asked for a replacement unit as I suspected the initial unit I received was defective.  Sure enough it was, the 2nd unit I received worked flawlessly pairing and staying connected to my iPhone 5S, iPad 2, HTC One Remix and my son’s Kindle Fire HDX too!  I also did some pairing with my Windows 8.1 PC though I had to get a newer Inatek 4.0 Bluetooth Receiver which only costs $8.99 to make it work, I had a ton of trouble with the Bluetooth 2.1 built into my motherboard and so I disabled the built in Bluetooth and used a separate USB Bluetooth receiver and it had no issue.

To correct a statement in the video, there is actually an L or R in the inner part of the headband but it is the same color as the metal so I missed it upon first inspection, so you can tell that which earcup is left and which is right, but to just say plainly the cup with the controls is your left ear cup.  This was a bit opposite of what I was used to, but it didn’t take me too long to get used to going to my left ear to mess with volume or track skips. 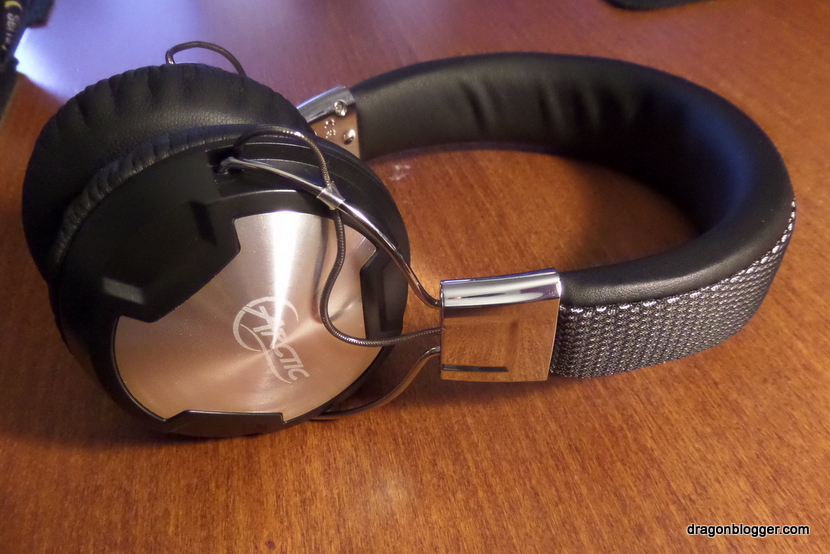 The ARCTIC P614 BT has a very comfortable foam padding not only on the earcups but also on the headband as well, it fits over my head well with or without a hat and it snugly presses against my ears without putting too much pressure. 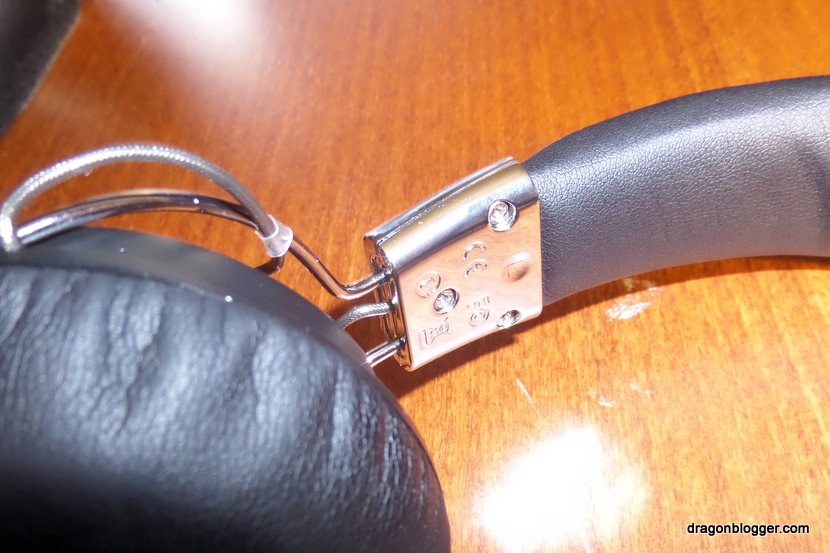 As you can see from the image above, there is a L in the circle at the top of the metal area just above the earcup, it is hard to see in light because the groove creates a shadow which obscures the letter, but it is there and easier to see with your eyes, but harder to take a photo of. 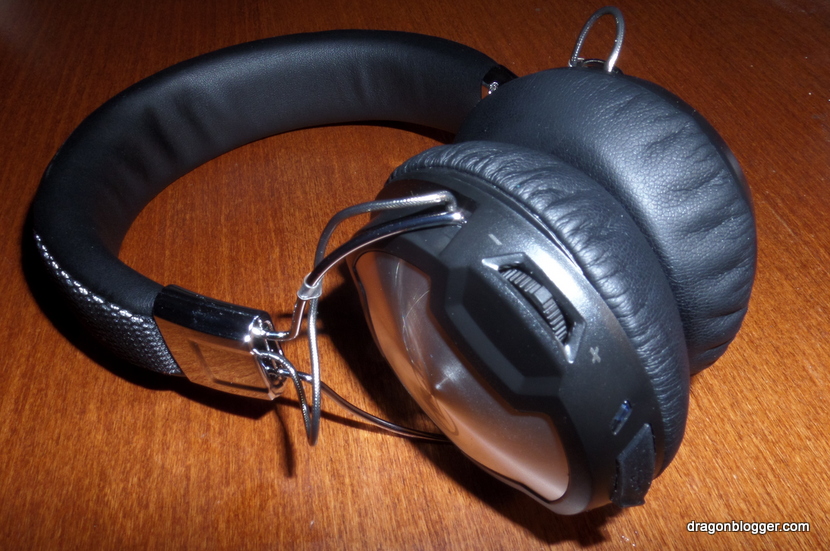 The volume controls work well and is also the “multi-function button” meaning the button is used to set it in pairing mode and execute any function on it as well.  The only odd thing about the volume controls is that when wearing the headphones, DOWN is actually making the sound louder, UP makes the sound lower.  Not sure why they put + as the bottom rocker and – as the top rocker but this is the opposite way to lower/raise volume from every other headset I have ever tested and when first using it I was raising the volume, when I meant to be lowering the volume. 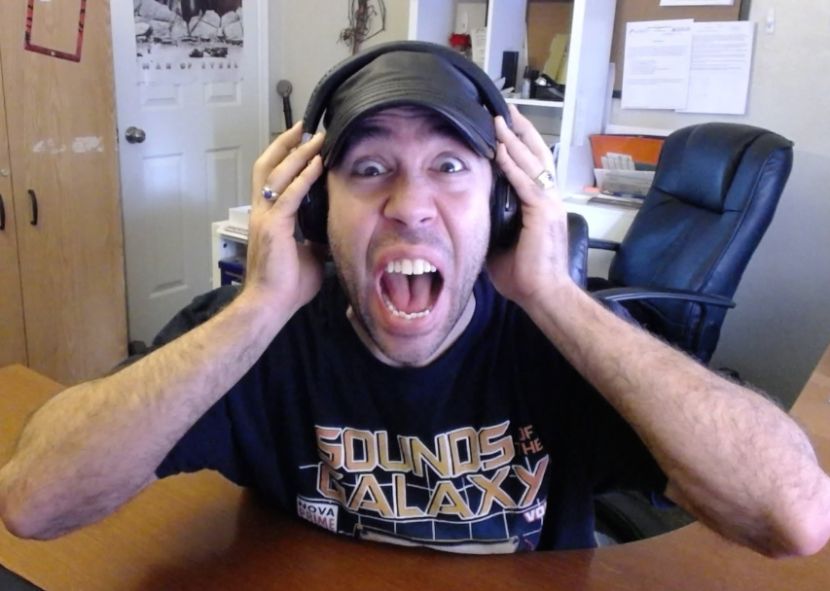 Speaking of volume, I decided to crank up the ARCTIC P614 BT headphones to see how loud they can get on Spotify and with my other programs on the iPhone and the volume on the headphones don’t  change the phone volume, they are independent so this means you can get EXTREMELY loud volume and not realize it and I was really impressed at just how loud the volume can get. 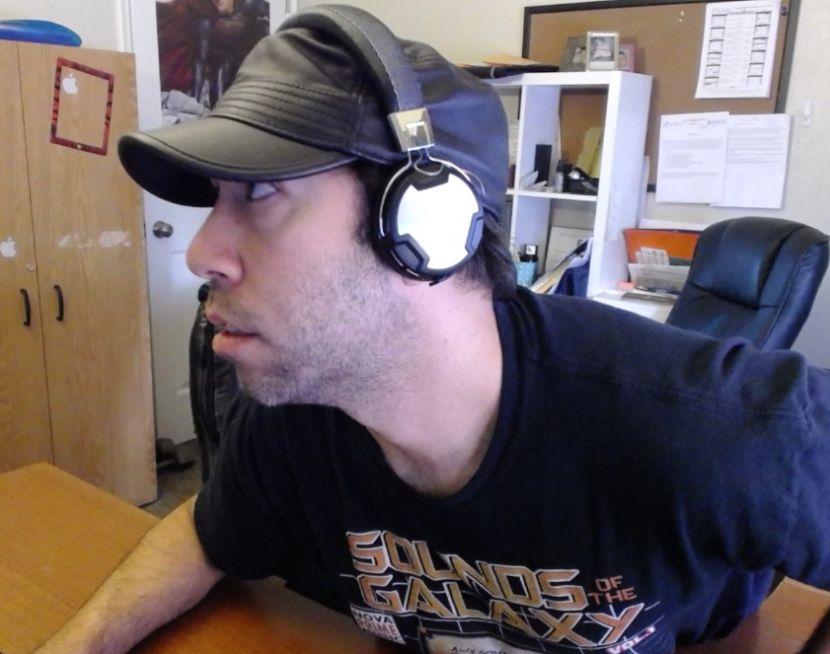 I had some initial trouble pairing it with my Windows 8.1 PC but realized soon that my ASUS motherboard had older 2.1 Bluetooth Drivers that were not working very well, so as I mentioned at the top of the article I installed the Inatek Bluetooth 4.0 receiver and it had no trouble pairing with the ARCTIC P614 BT headphones.  I was able to watch YouTube, Netflix and tested the video/audio sync and noted that there appeared to be no delay between video I was seeing on screen and the audio projecting into the ARCTIC P614 headphones, I even watched YouTube and Netflix from the iPhone 5S and again the audio seemed perfectly in sync with the video to me.

Spotify was another story on the PC, for the Windows, Mac and Linux Spotify clients apparently Spotify is one of those apps that just don’t work with A2DP (Advanced Audio Distribution Profile) technology that high quality Bluetooth Audio Devices use, after troubleshooting for a long time I found this thread https://community.spotify.com/t5/Help-Desktop-Linux-Mac-and/a2dp-bluetooth-and-Spotify-don-t-work-together-on-laptop/td-p/159506 and there was no workaround music would pause/glitch and interrupt on Spotify, but only for the PC.  The Spotify app on both Android and iOS had no trouble whatsoever, so this was very specific to the Spotify client in Windows.

This was an Audacity Mic test with the ARCTIC P614 without any filtering or audio modification applied, I wanted you to hear it natively and there is a tinny/canned effect and I noticed that on the PC the Bluetooth would have tiny audio artifacts at random intervals.

NOTE, this is REALLY POOR MIC QUALITY for Bluetooth to Windows 8.1 for ARCTIC 614P BT but it isn’t the headphones, it is more likely a Bluetooth issue.

Overall the ARCTIC P614 BT Bluetooth headphones were fantastic, comfortable and provide a very nice sound quality, these would make an excellent pair of Bluetooth headphones for mobile devices, though were a bit more problematic on a Windows 8.1 machine but I attribute this to Windows not having proper Bluetooth audio support in most cases.  The headphones did occasionally have audio artifacts but only when moving the source or headphones around at fast speeds, or if you get over 20′ away from the Bluetooth source, overall the sound quality was not only good, but volume was fantastic and there was virtually no noticeable lag between watching video and hearing the audio over Bluetooth.

This is a 4.5 star product in my book, the only thing I wish the headset would have had is some audio control software (iOS/Android app) to control and set bass/treble and some more audio controls.  It also could an audio jack so that you can plug it in as a manual headphones for versatility in case you have a device like the PlayStation 4 where you want to use these headphones if only they would plug into the PS4 Controller.  The are exceptional for the price at under $50 and worth it as I have not tested any Bluetooth headphones under $100 that have matched the quality of these.