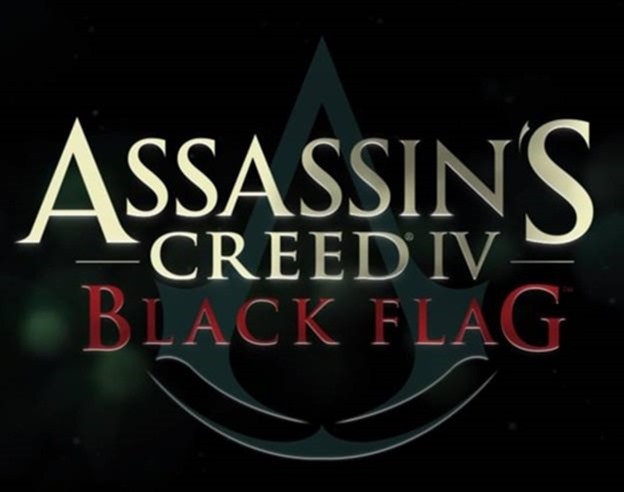 This was an amazing game, from start to finish. This was my first introduction into Assassin’s Creed although I do have 2 and 3; I have never had time to play them. While an amazing Booty robbing, swash buckling, cut throat pirate game as this is, there is much more than that. Follow me in my Journey through Assassin’s Creed IV Black Flag.

SPOILER ALERT: This is not exactly a walk-through since I do miss somethings but this review will go from the start of the game through the credits and some multiplayer as well. If you don’t want spoilers, you may not want to read further. 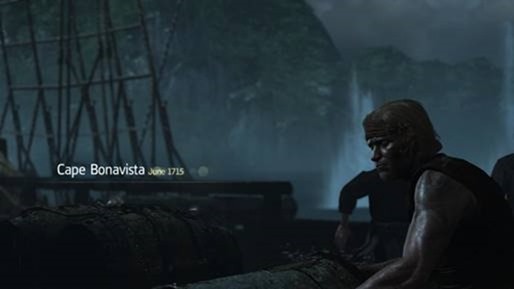 You begin your quest as Edward Kenway on a ship near Cape Bonavista in the pouring rain feverishly loading cannons during a battle at sea.  As Edward is loading the cannon the ship is struck and he falls back, when he comes to his senses he hears another shipmate screaming for someone to be the helmsman.  You are now in control and quickly take on the task. You quickly take on the task.  Your initial tasks are to destroy the enemy ships nearby, an easy task as the helmsman the task is to steer your ship to victory.

Attacking this pack of 5 schooners is relatively quick and easy.  As the last ship is destroyed the crew starts celebrating when things on the ship start to go awry.   The gun powder barrels start exploding and the crew quickly tries to douse the flames.  A dark cloaked figure jumps on board and assassinates a member of your crew.  As Edward jumps to action an explosion blows him out of the ship into the ocean. 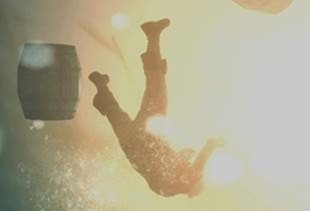 The screen fades in a scene with Edward speaking to his wife Caroline in bed about getting ahead in life.  Edward wants to go away for a year or 2 to make some money and join a crew as a privateer, a flash back it seems.

After a few seconds of this argument he awakens under water. Edward awakens surrounded by sunken ships and dead bodies floating in the dead space of the ocean. You quickly swim to the surface before you permanently join the other bodies. 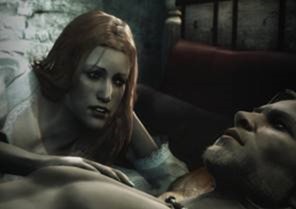 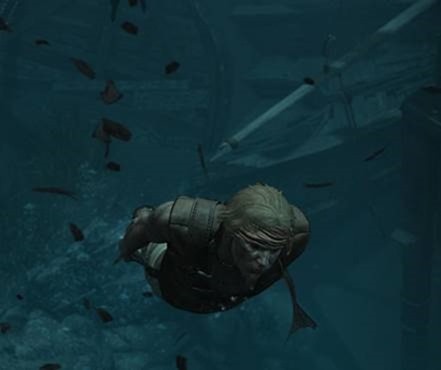 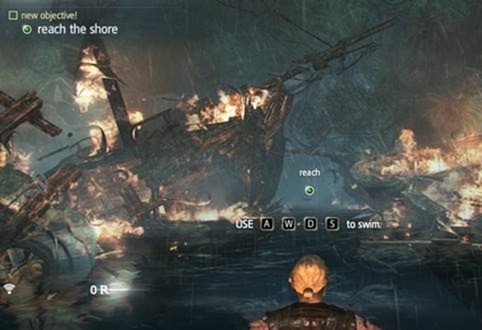 When Edward finally reaches land he lays on the beach for a bit to regain some strength when another person crawls up to shore a few feet away. The other person turns out to be an assassin and he asks Edward for a ride to Havana, he offers to pay you 100 Reals.  The conversation goes on few a few seconds and a chase ensues as tempers flare. 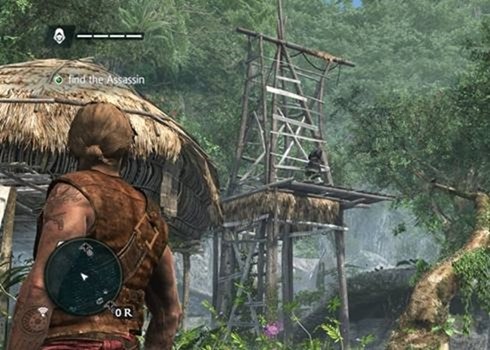 After a bit of chasing Edward catches up to the assassin and a fight begins.  You win the fight, kill and loot the corpse and find a letter made out to Duncan, the assassin you just killed. 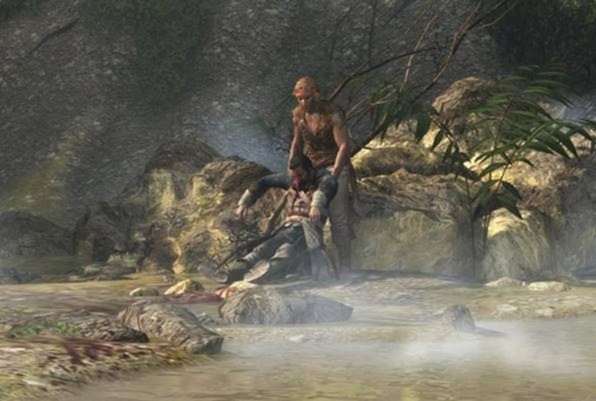 The letter is from Governor Torres, the Spanish Governor of Florida asking to meet you in Havana.  To make it believable Edward takes Duncan’s clothes and poses as Duncan but is still left without a vessel. 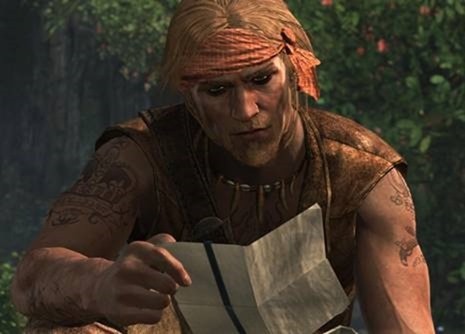 As you roam this new land in your new digs, you hear a gun shot.  Searching for that sound you quickly approach the cliff and can hear people talking.  It seems that the some men have taken a few hostages and possibly plan to take their ship.  This is where you learn how to hide in the bushes and stalk your prey.  You must lurk around a bit as the red coats walk around and you can take them down one by one,  into the bushes to kill them, but don’t get spotted. 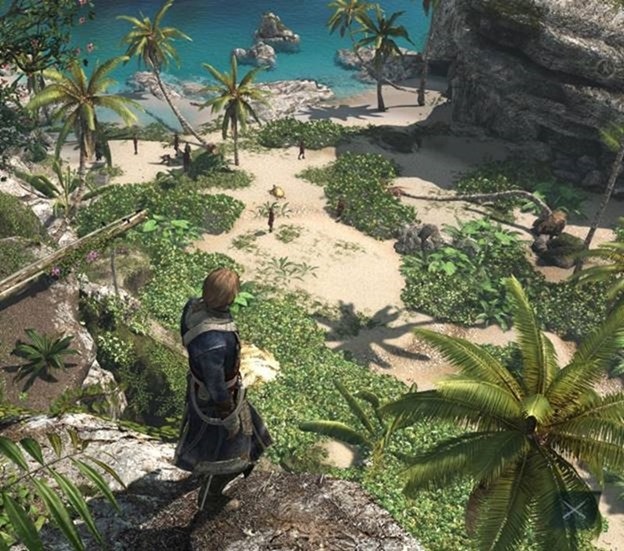 Once these men have all been slain it is just you and the last survivor Stede Bonnet, the others in his crew have been killed.  Stede has his own ship and is also on his way to Havana but has no Captain.  Since you can Captain, it seems you have yourself a new friend and a ship.  Time to set sail for new adventures! 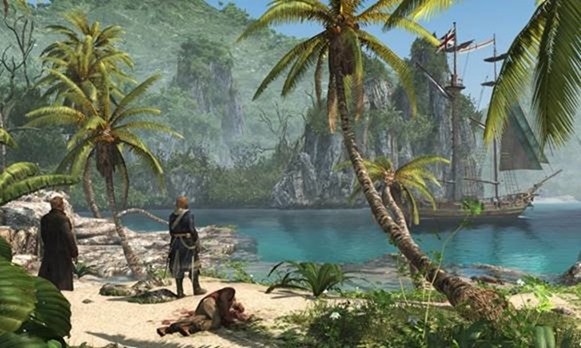 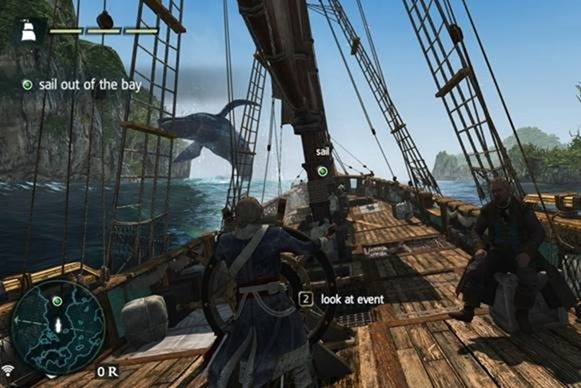 After about 1 or 2 minutes of sailing your new ship and watching the amazing sights the screen dims and you hear a woman’s voice saying “Fantastic work, very promising”.  I sat back thinking this was another flashback and was amazingly surprised to find a modern day woman in a laboratory of sorts with computers behind her.  I thought this was a game set in the past and I was a pirate… 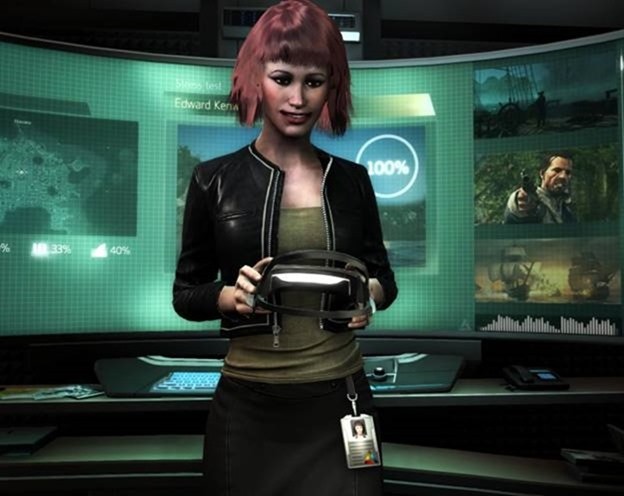 Melanie greats you as you awaken from you slumber or intense VR session.  To make sure you are OK, she asks you to look up and down at the lights that are blinking.  Once she sees you are ready to go she welcomes you to Animus and Project 17,… just go with it for now.

When you are up, you are guided through the first door and around the facilities.  As you follow she tells you that everything you are going through is a memory extracted from DNA found.  Very interesting, let’s see how that plays out. 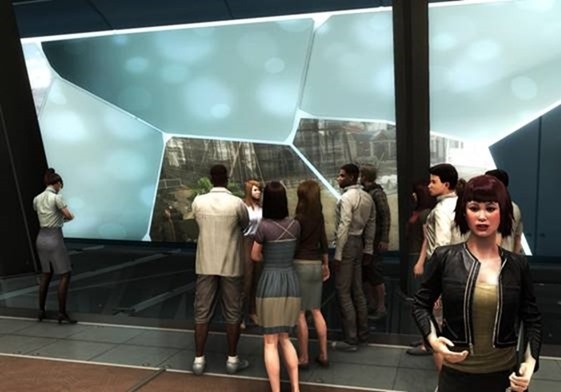 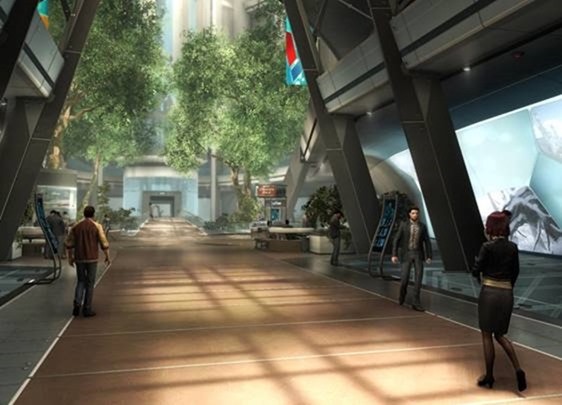 She motions to billboard of Liberation, Abstergo’s first title she says. 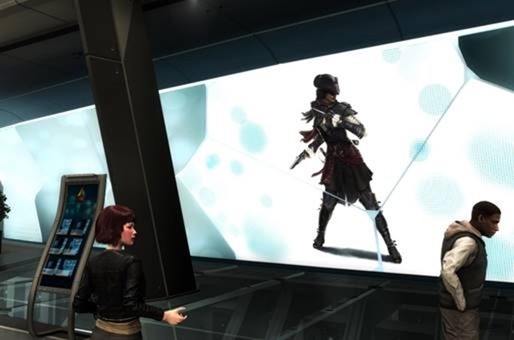 As you make your way to the elevator she hands you a tablet.  She mentions that the security is very light as everyone in the building has a tablet.  The tablets are the only way to navigate the locks in this building; the tablet has your identification on it.  With it, you can access locations based off of permissions IT grants you, like a badge.  Once you make your way into the elevator she lets you know that you can control the elevator through your tablet and to select the Sample 17 floor. 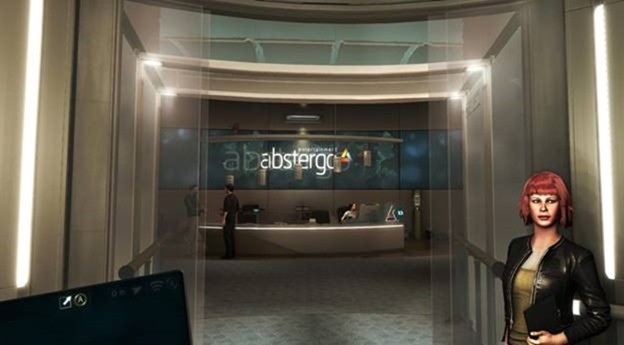 When you reach the receptionists desk the big boss comes up, Olivier Garneau is his name and Melanie introduces you to each other. 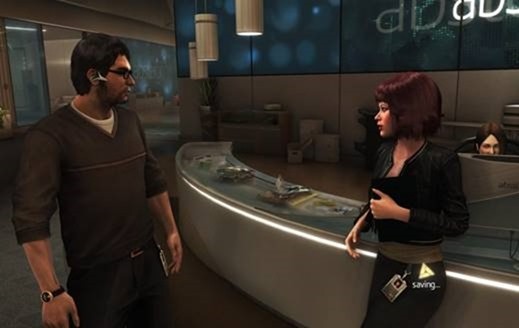 Like most CEO’s he is fairly disconnected from the workings of the company and the new hires, he asks which character you are and goes down the list.  After dropping a few names, Melanie interrupts and says “Edward”, Olivier seems to love the pirates and emulates your character, Edward mockingly.  At the end he mentions to her that they need to meet in private later and she breaks away showing you to your desk, looks like you are on your way through Google. 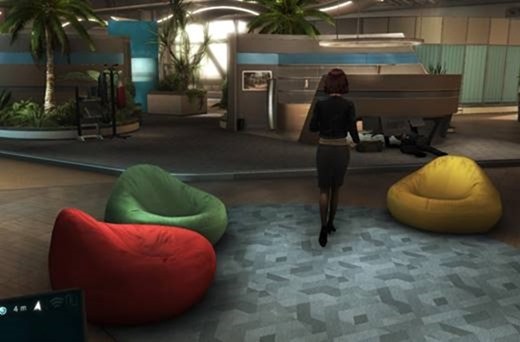 Melanie walks you to your desk where you meet John the IT guy who is calibrating your PC.  DO NOT SAY FIXING, he seems to get insulted by that. 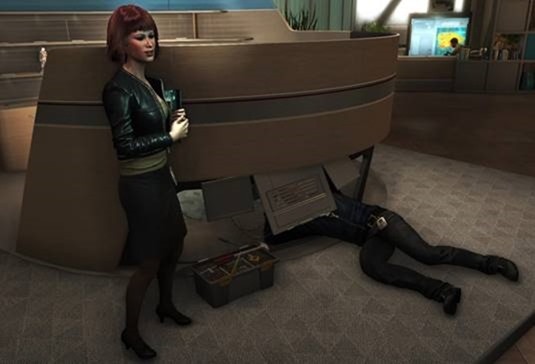 Then finally you reach the other side of your desk where you will spend most of your time (like in real life).  Here is where you log back into the game from within the office. 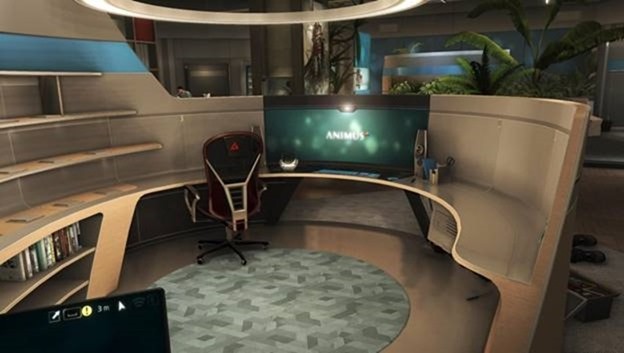 Here you see your shelves with a single ornament, a figurine. 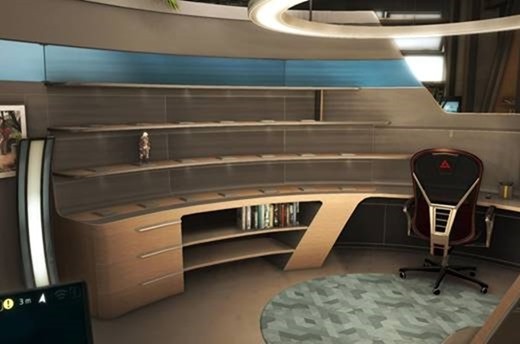 This figurine is you; Edward as an assassin and this shelves collection will grow quickly.  As you meet key people within the game the shelf will populate itself with these characters.  Let’s jump back into the game. 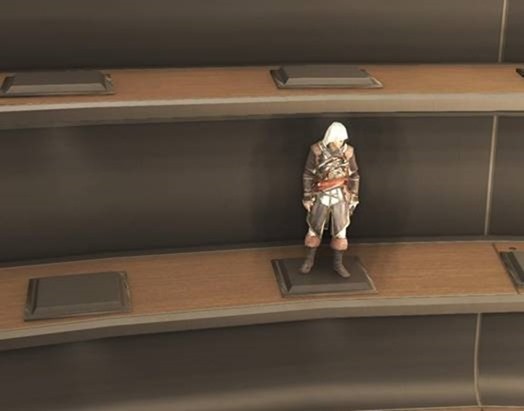 When you first log onto your machine you are greeted with a female computerized voice and brought to this screen.  You will land on this screen often, every time you die you enter this limbo state where you can run, jump and swing your swords but really go nowhere.  It does not say it but it seems to be where the game loads. 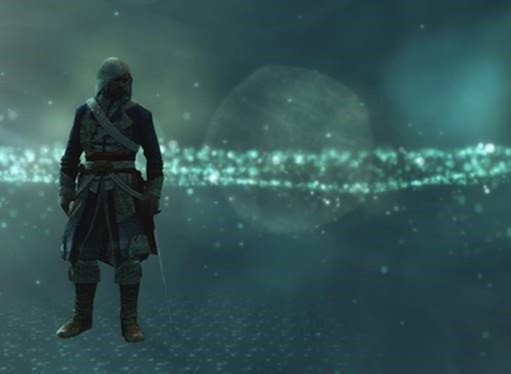 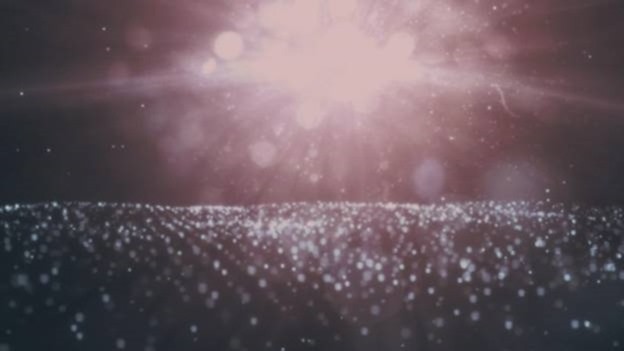 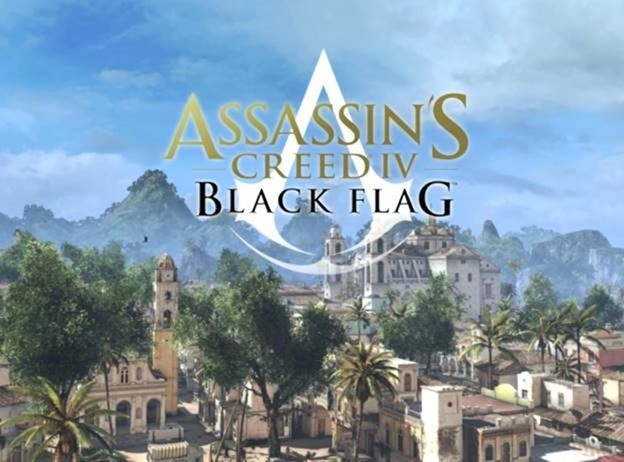 Till this point you have gone through a scripted playable intro although it didn’t feel too scripted but it was because now the game starts.

As a new comer into the series I liked the Pirate aspect, it was pretty fun and the story was pretty original.  So far the story had me hooked; I can appreciate where Edward is going trying to make more out of himself and his wife not understanding.  In such a short time there have been some nice twist and thinking the surprises were going to be minimal you are thrown into the modern age as a different character with a different story, but how different?  It actually gets a little more warped, check out the next chapter in this review coming soon.

Let me know what you think so far.