When I was a young man, I saw my first virtual reality head device. It was a very bulky helmet that looked like it was a part of a space suit, and had all kinds of wires attached to it. The resolution was poor, as well it would be since we had low quality 8 bit graphics at the time, and wire frame models were the norm. 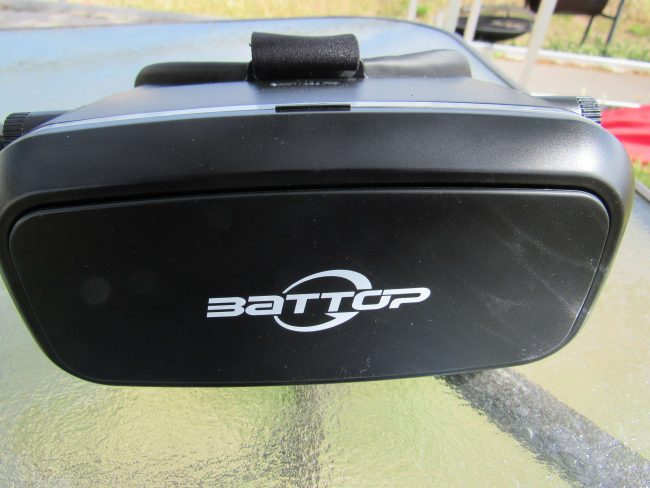 Today, the technology is very different, and the whole thing fits into a slightly over-sized pair of goggles, resembling something you might wear to go out snowboarding with. 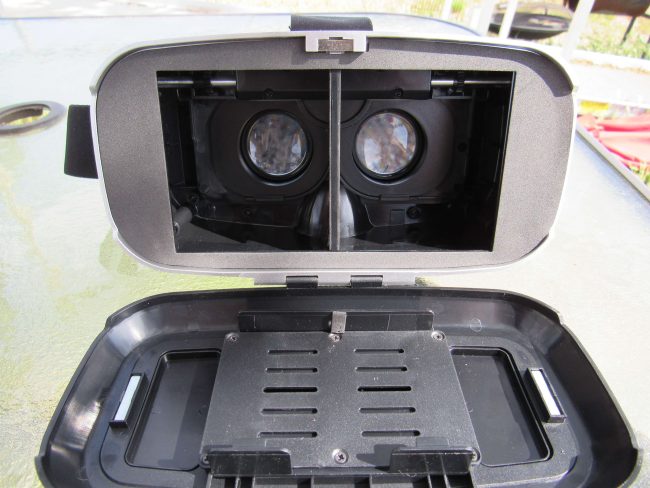 Battop has a rather simple idea with their VR Headset to allowing one to view 3D content quickly and affordably. All you need is a cell phone with a 5-6 inch display. 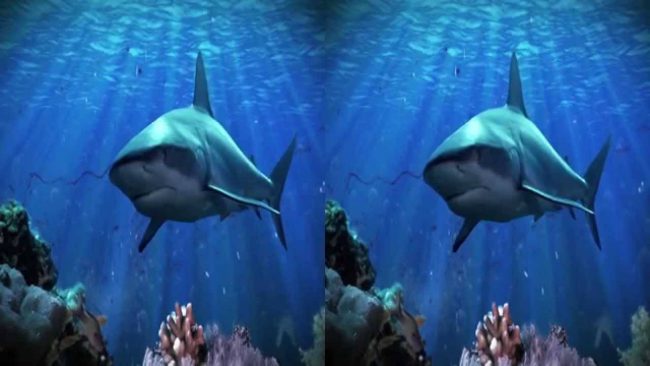 The device is designed to allow Side by Side half screen 3D viewing. In other words, your left and right eye each receive an image that is offset from each other by a certain distance and angle. If this is done correctly, you get to see a single image in front of you but instead of it being flat, it has depth and stands out much like a 3D movie does at the theater.

The device will hold your cell phone securely in place, lengthwise, and the whole thing closes up so that you look through two eye pieces. What you see is one image though it is really two, and that is how it works.

The unit allows for air to flow around your phone so it does not get too hot, and it also has enough space to allow a cable to stick out so you can possibly use a mouse or wired controller, external power, or headphone plug to be in place while using. 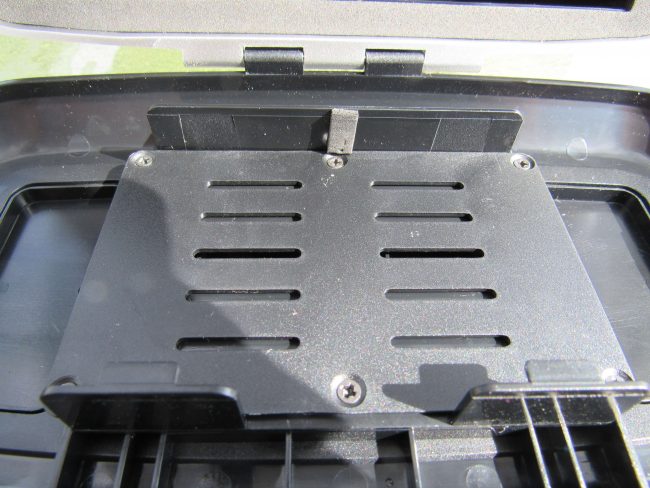 The entire thing fits onto your head using three straps that expand to accommodate most any head size. My 3 and 4 year old granddaughters had no trouble wearing them as well as the adults who tested it out.

The unit is also fairly light so there is no strain on the head or neck wearing it. I tested it with a few videos I found on YouTube, as well as a few games from the Google Play Store. Some of the videos did not truly look 3D, while others did. If they were not originally filmed to allow for SBS 3D viewing, then they really will not be true 3D, but those that were looked wonderful. (Even with the cracks in my screen) Also, many of the existing 3D SBS games on the market looked great. I will say you need to read the fine print however. Some games are designed for a specific 3D headset. As such, they may not perform the way you might expect. For instance, some require a magnet system. Which the BATTOP VR Headset does not have. Other 3D apps allow for tapping the screen, which cannot be done with this headset, and still others need a Bluetooth controller which while available to be used from other vendors, I currently do not own and this VR headset does not come with one. There are however many games that only require you to look around and go beyond the single dimensions many games provide. 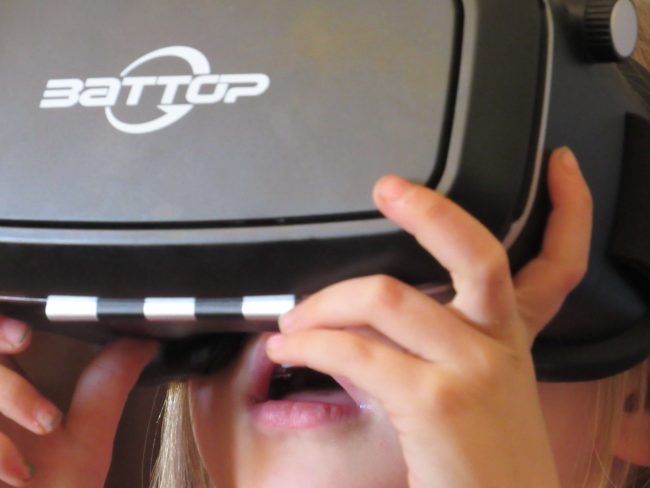 Adjustments are available as well. On the side are two knobs that move the viewing distance to and fro so it is a little like focusing. And one wheel on top is used to change the eye distance which I found affects the 3D image a great deal. It can align the images to make them more or less 3D in appearance. 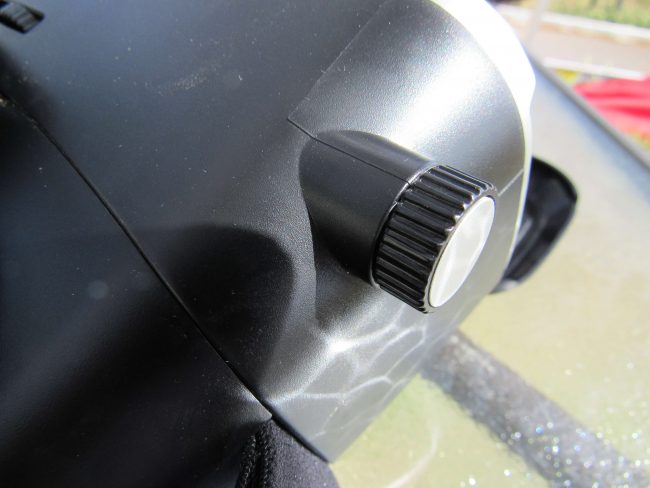 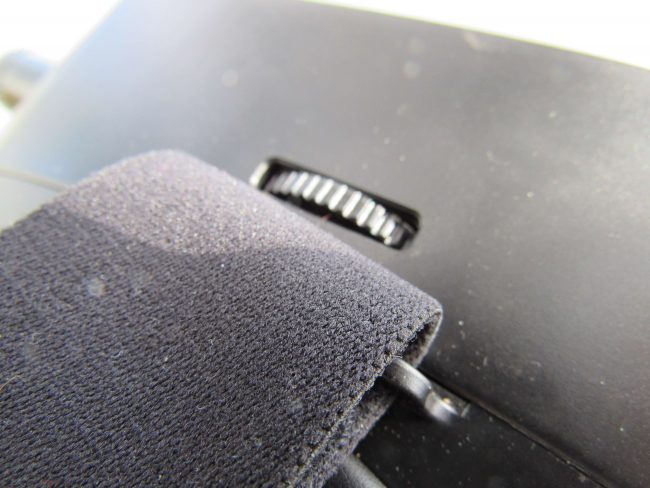 On a few games I have tested, there is a ghosting where the one image actually appears to be two, and I truly feel this is not the fault of the device but the programming, however, it may also mean you need to make sure the split in the screen is aligned properly before you close the device up for wearing and viewing.

The only downfall I can see of this device and perhaps the technology in general is the need to start things with the device off the head and opened prior to playing the content. With a lack of a controller provided this is a minor inconvenience. The only other issue I could address that concerned me was the lack of information provided as to what to look for on the play store. Since this was my first experience with the technology, I was totally unaware of what to look for on the play store or anywhere else for that matter. So, for you, know that you need to search for content that supports SBS Half 3D.

Over all, I am happy with this device.  Just looking at the smile on my Grand daughters face makes it all worth while. I think it is a great addition to my collection of neat devices, and I can see myself using it more and more, especially if the technology and gaming industry continues to support it. 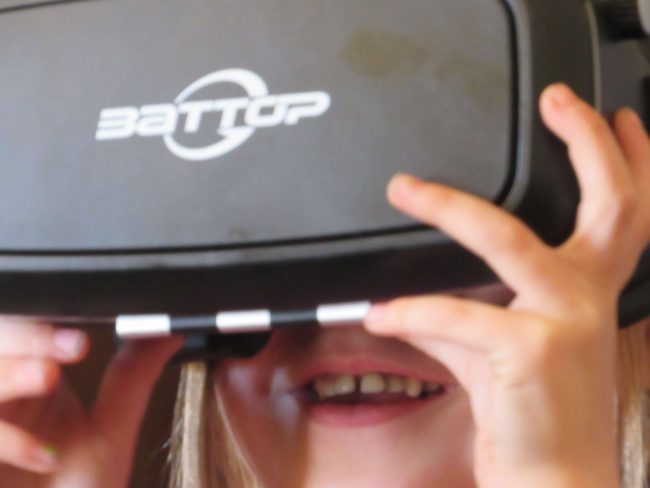 Disclaimer: Battop provided me with their VR Virtual Reality Headset System for review. All opinions are 100% mine and mine alone.