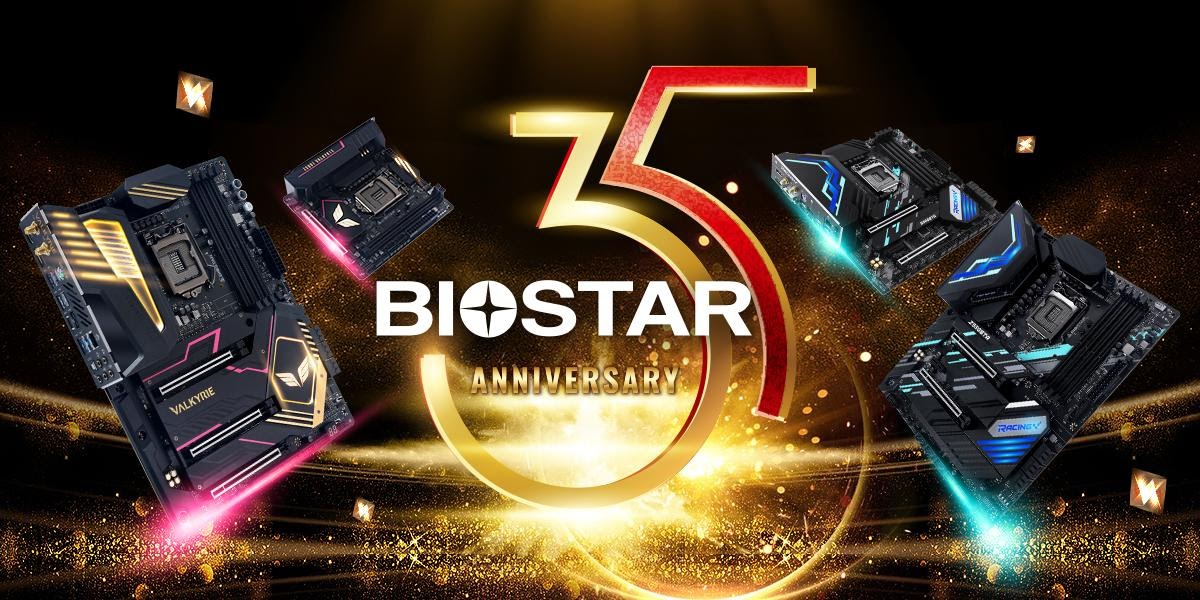 Since its establishment in 1986, BIOSTAR has opened up new territories in various markets over the years and has been welcomed by many happy consumers, including professional esports players, casual gamers and tech enthusiasts from around the world.

Last year, BIOSTAR finally made their official entry to the Taiwan market with the launch of their products in the popular ecommerce website PChome / MOMO SHOP and since then, they have gradually deepened their roots in the local market gaining immense popularity.

BIOSTAR ushered in its 35th anniversary in 2021 by launching a new line of flagship motherboards catering towards professional gamers and content creators. Named VALKYRIE, the new flagship series supports the latest Intel 11th generation processors enabling cutting edge technology like PCIe 4.0 and many other powerful functionalities.

BIOSTAR’s strong launch in 2021 follows up with the introduction of their virtual mascots for the popular VALKYRIE and RACING series motherboard, attracting the attention of everyone, and adding more trendy, youthful and lively feeling to the brand! 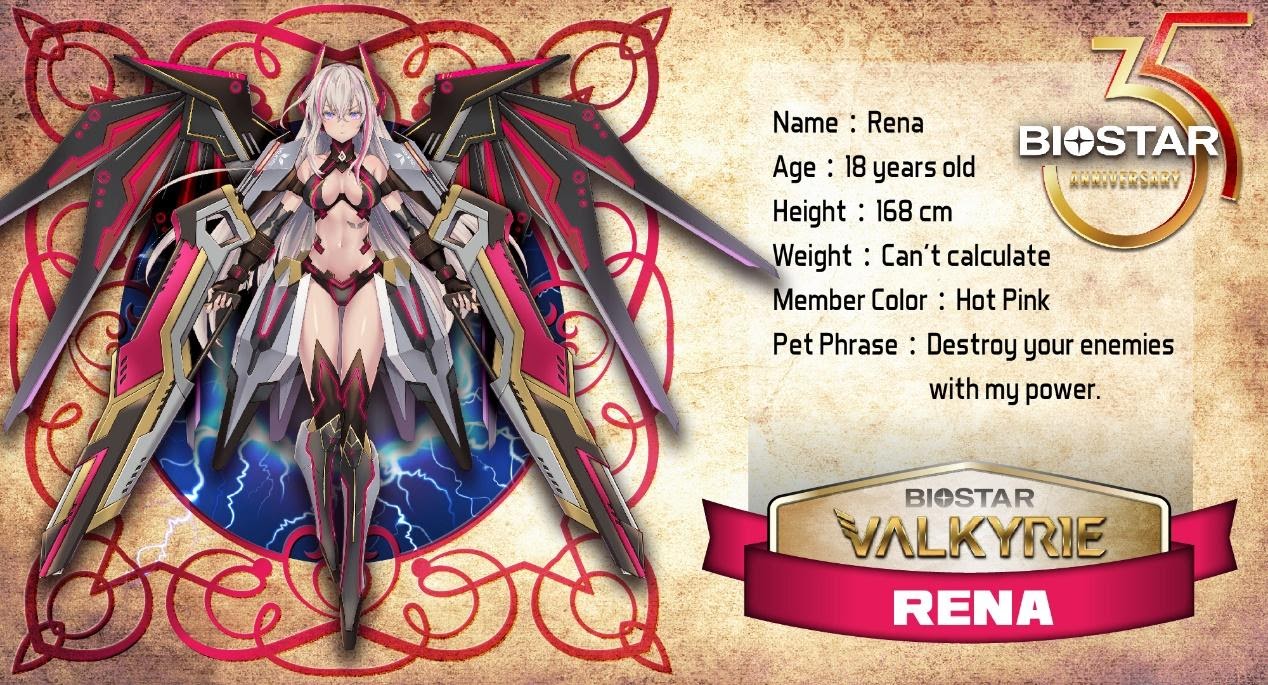 BIOSTAR’s surprise release of their brand-new high-end product line VALKYRIE series at the beginning of this year has attracted many consumers due to its bold new design elements and the number of features available in them.

The first generation of VALKYRIE is a newly launched high-end professional gaming motherboard, with the 11th generation Intel Z590 chipset, breaking the previous new design style and equipped with the latest technology, and immediately attracted the attention and expectations of the gaming market and tech enthusiasts around the world. BIOSTAR also announced Rena, the virtual spokesperson for the VALKYRIE motherboard range. Rena is both wild and fashionable, adoring a black and hot pink steel armor clothing complimentary to design elements of the VALKYRIE motherboard. She is the ideal waifu with soft features resembling the surgical precision and technology of BIOSTAR products and her hard armor resembling the durability and extreme power.

The Z590 VALKYRIE series gaming motherboards are designed with dynamic golden lines that represent the raw power it carries, engineered for gaming and extreme use.

Highly stable power transmission across all its components and an excellent passive heat dissipation capability are two of the main reasons why the Z590 VALKYRIE series motherboards have a high demand and popularity.

Universally requested features like PCIe 4.0, PCIe M.2 4.0 and overclocking up to 5000+ makes the VALKYRIE series motherboards the top choice for any tech enthusiast and is undoubtedly the strongest force in the gaming battlefield, players can fight side by side with VALKYRIE RENA and stand out from the crowd in the game world! 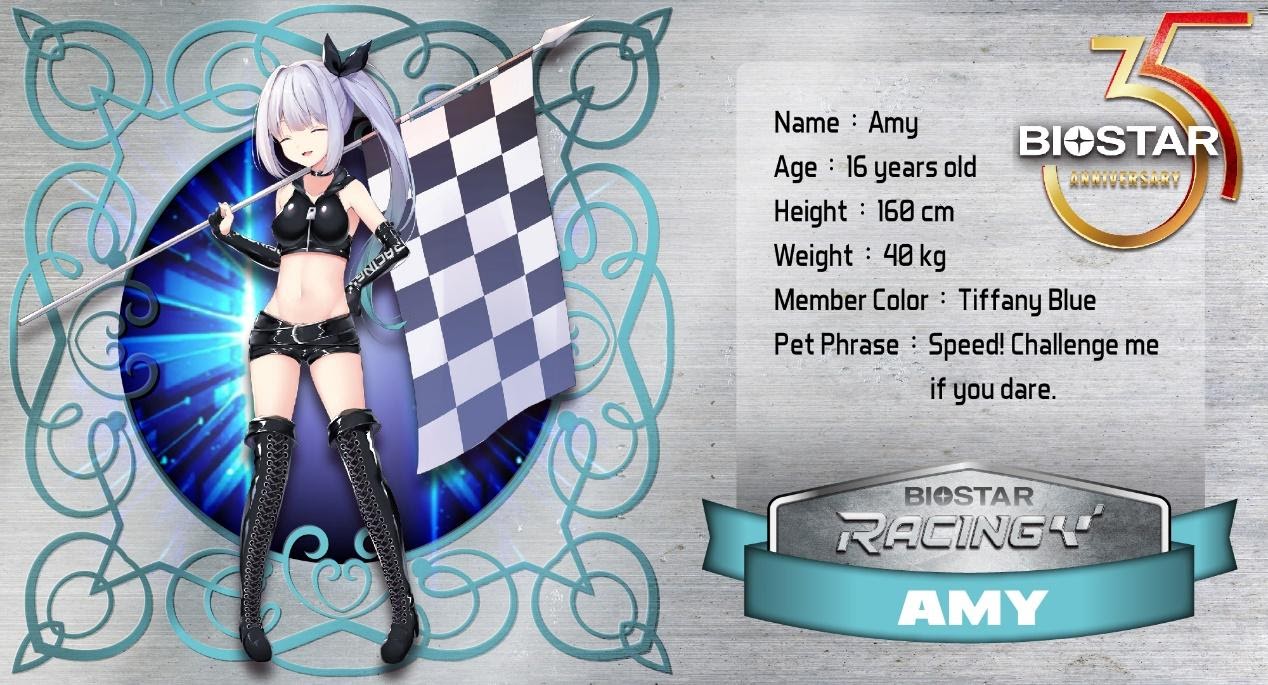 This year, BIOSTAR also made a new upgrade to their classic mid-to-high-end RACING series. Designed for gamers and content creators, the new RACING series motherboards have made drastic improvements when it comes to its design and functionality.

BIOSTAR has used a new innovative design approach that uses bold and unique colors to enhance the appearance of the device as well as provide added functionality and protection. The black mainboard is matched with tiffany blue and grey panel lines representing speed, true to its RACING heritage adding vitality to the racing style of this motherboard.

BIOSTAR also introduces a new virtual mascot created for the RACING series, named Amy, this bubbly character is sporty and mischievous. Amy’s appearance represents the new RACING series motherboard range. She wears a tight-fitting leather jacket, that resembles the motherboard’s armor gear design and her light and petite figure, symbolizing the nimble yet extremely reliable performance. The RACING series brings to the table that run lightly and race the future in major games and creative inspirations.

The RACING Z590GTA and B560GTQ launched this time support the latest Intel 11th generation processors powered by Intel’s Z590 and B560 chipsets respectively. From heat dissipation, power management to performance enhancements, the new RACING series motherboards have shown impressive stability and extreme performance. Amy and RACING series motherboards will be your best partners and will boost your efficiency to the next level in various applications such as gaming, content creation, business, entertainment, etc.

BIOSTAR celebrated its 35th anniversary this year and announced that they will continue to grow their business globally and introduce more competitive products for consumers. Crypto mining-based motherboards and DIY PC solutions will play a major role in BIOSTAR’s future plans for Taiwan as these are some of their most popular, fast moving products across the world so they are eager to provide Taiwan consumers the chance to buy some of the most requested products from their catalogue.

In the meantime, the upcoming VALKYRIE and RACING Z590 and B560 series motherboards have now set off a wave in the tech industry, and it is safe to say that everyone is looking forward to getting their hands on these devices. BIOSTAR team hopes that their new mascots Rena and Amy will bring cheer and joy to their fans in tough times.

BIOSTAR, is a professional brand dedicated to the production of motherboards, gaming motherboards, SSD, graphics cards, industrial computing systems, IoT, crypto mining equipment, healthcare solutions and motor start battery. Since its establishment in 1986, BIOSTAR has become a major motherboard supplier in the IT industry. In order to pursue the best quality and aesthetic design, BIOSTAR has invested heavily in ID design, equipment, global marketing research as well as R&D. With a constant emphasis on quality, BIOSTAR always seeks to improve beyond better and race to the future.