Spotify which is arguable one of the best desktop music streaming services on the planet is an ad supported music player that is integrated with Facebook.

The creators of Spotify wanted to make sure no one could  hide ads, or crack it so they have made it debugger proof and have made ads nearly impossible to remove.  But there are some really clever guys who have managed to mute the annoying ads in Spotify every time they pop up.  It is possible to block Spotify ads by using Blockify, which is freeware.

Unlike other Spotify ad blockers, this ad blocker does not need an list of ads but finds them out instantly as new ones appear. It is fairly easy to use, just run it after downloading  and set the options you want.

It works well with the default options but if you want it to start whenever you start Spotify, then check the Auto Start feature. You can make it play music when an Ad is playing, by selecting Play MP3 and setting the MP3 folders, it will resume the Spotify music as soon the song that plays during the advert is over.

So rather than block it is more like “replace advertising with custom MP3” so that you don’t have to hear the ad. 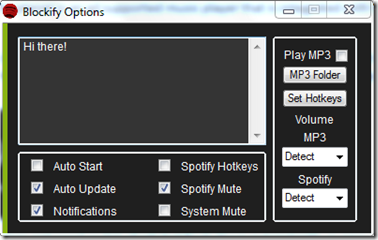 Blockify is available only for Windows, if you want to block Spotify ads on Mac OS X, then use Smutefy.  Or just simply sign up for Spotify Premium which has no ads and has the added bonus of letting you sync songs offline so you can play them when you don’t have an internet connection.

Do you know any other better alternatives? If so, I am dying to find out.

Editor’s Note:  It is technically against Terms of Service to interfere with the ads on Spotify, so we can’t really condone doing this and are just sharing the information for public awareness purposes.

Check out my personal blog HackToHell :)