For as long as I can remember, I have wanted a 3D printer. I did not know what I would do with one, but I wanted one. Borlee has provided me with their Borlee Mini 01 to review, and I am excited to share with you, the results. 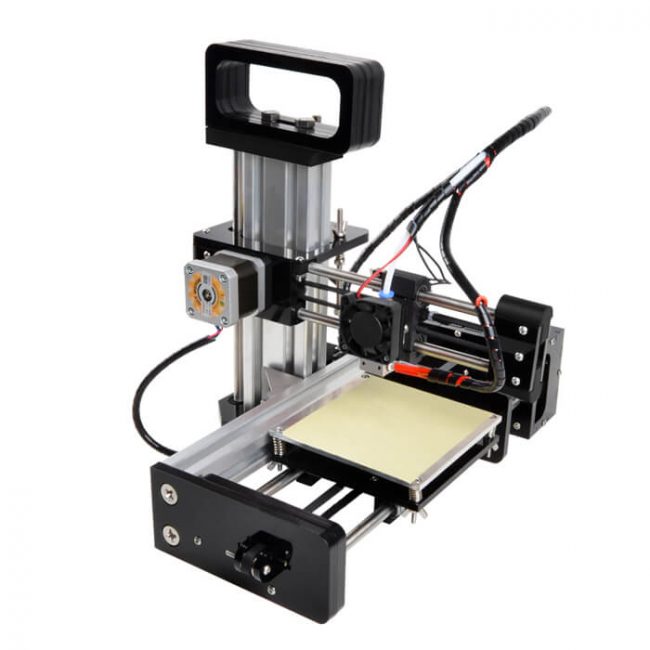 When the box arrived, and I began the unboxing, I honestly did not know what I would do with it. I imagined that I would need to know some complex computer language just to be able to make a blob of plastic come out of the machine, but as I discovered, it was much easier than I had imagined.

Everything you need, including the plastic, is provided. The printer itself comes mostly fully assembled, and ready to use right out of the box. The only thing I needed to put together was the control box where the computer controls are housed. That took me only about an hour. I did have a few setbacks where I accidently unplugged a connection and had to take it back apart, to fix, so please be careful. To see the initial look at the 3D printer prior to use, look here. 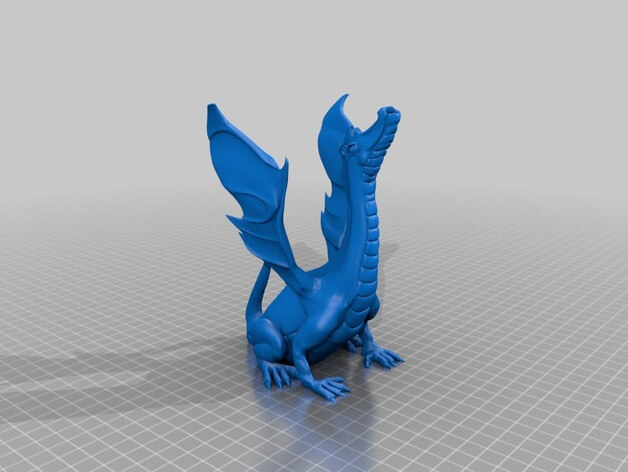 I decided to do my first print project using a model I located on a website dedicated to showcasing user’s projects. Some are clearly homemade and unfinished while others and polished and complete. For my project I chose a dragon, keeping with the dragonblogger.com symbol theme. I did have only one problem. My box did not contain the SD card with the software on it. I contacted the manufacturers through customer service, and in less than 24 hours, I was in possession of a detailed file with everything I needed and more.

The preferred program for running the prints is Cura 14.12, which is not the latest version. I did ask if I was able to use the updated version and was simply told that the printer was designed around this older version and that they could not say if it would work with the newer one. I have not tested any print using the updated software. Once I do, which I will soon, I will share the results in a follow-up post. For now, please take a look at this video about the Cura software. Please keep in mind that I have only used the program to the point that I needed to for the printing I have done. It is possible that there are a few features I have not explored and am unfamiliar with at this time.

As mentioned before, I chose a dragon to print. I did this for several reasons. For one, I thought that it would be nice to print a dragon since it is a big part of our blog design. I also chose it because of the details. The neck had nice ridges on it, and the wings were fairly detailed. In addition, the mouth was open and for some way, hollow. I also noted that the wings were not supported, and I wondered if they would droop when printed. I was pleased by the results. 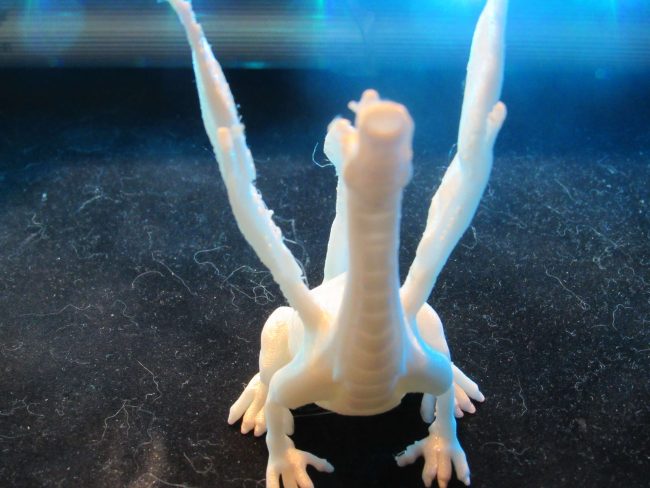 All it needs is a little paint.

Before I speak to the results, I needed to say something about the print bed. That is the aluminum square that the final print rests on. If you notice in the video, there is a yellowish colored tape on the bed. My son wondered why it was there and thought it was strange to have tape on the bed when printing. What was strange is I took advice from someone who had never used a 3D printer and removed the tape. The tape in this case and probably all others serves to hold the project into place. When I attempted to print something with the tape removed, the plastic shifted around and nothing of any substance formed. Once the tape was placed back on the bed, the plastic stuck to it fast and remained in place. What I do not know yet, is do I need to cover the whole bed in tape or just a strip in the middle.

When using the tape, I noticed a few things as well. The project can feel fused to the print bed. I was concerned as it seemed to take a great deal of force to remove the dragon, and I was afraid I would break something. I did a google search and discovered a few things I wish to share. One tip was to use blue painters tape. I grabbed a roll and tried it out. I, in fact, tried it on two print jobs. On the first, I noticed that the tape became unstuck from the bed, and curled upwards. The plastic followed the curl and the final results were a disaster. Also, I noticed that the tape had some green print on it and that stained the bottom of the print job. 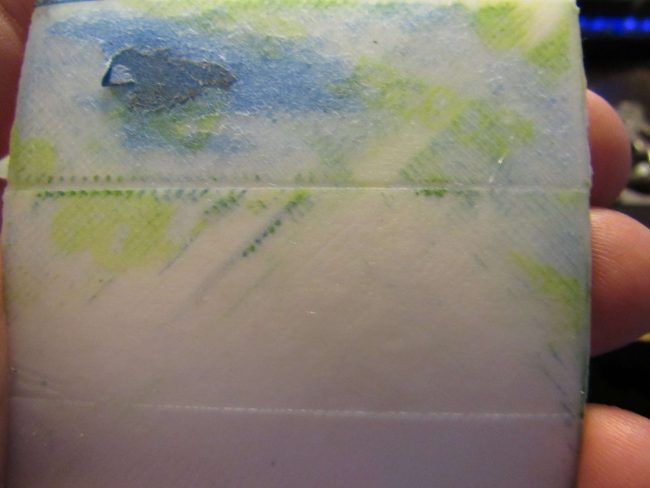 I switched back to the regular masking tape and tried the second technique for unsticking the project, and that involved using a bit of alcohol. I suggest getting a bottle with a long tip so you do not waste any when applying it. What is does is loosen the glue on the tape, making it easier to remove. I still needed to apply some force with the scraper, but a lot less force was needed. The alcohol also serves another purpose. It removed oils from the bed, along with any excess glue from repeated use of the tape. Which makes tape adhesion better. I am getting ready to test one other type of tape, and while it is still masking tape, it is considerably wider, not as thick but wider. It seems that the bottom of my print projects takes on a seam from the width of the tape as well. I am attempting to minimize this in future prints. I could also as a side note, possibly use a product that replaces the tape altogether and might eliminate the need for tape, but I have not yet even looked into it enough to fully vet its use.

When I printed the dragon, I noticed a few things that I did have concerns over, the biggest of which were strings. When 3D printer prints, it has hot ready to use plastic in the nozzle. When the nozzle stops printing to move to another location on the project, sometimes the hot plastic seeps out and trails along as the nozzle is in motion. this causes strings. the means to reduce the strings is a function of the settings in Cura dealing with retraction of the plastic while traveling and not actively printing. this simply means that when the nozzle is in motion to a new location, the plastic is withdrawn back into the printer to lessen the amount of plastic that seeps out while the nozzle moves to a new location. I made changes to this setting and in future projects did not have as many strings as before.

Ok, so enough about all that. I might not have mentioned earlier but there are a number of components included with the printer that was not fully understood when I first opened the box. Once I received the software file, it was more obvious what they were. I will insert the diagram of the included supplies so that just in case it is not available for you, you will know what is what. 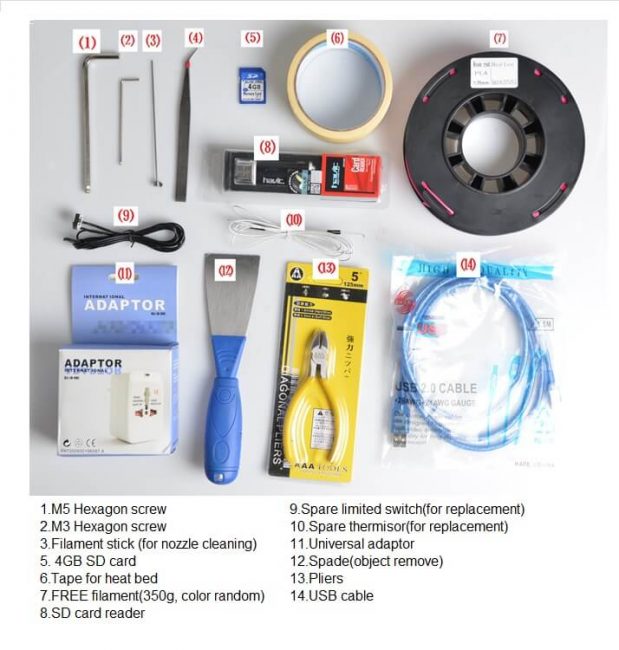 The adaptor threw me at first. I honestly thought it was for the wrong country and the plug from the power supply was not the kind I expected for the United States. But have no fear, there is the proper type of connector on the adapter it just needs to be pulled out from the body of the adaptor on the back.

Ok, so what can we print? Well, just about anything that fits within a 90*90*90 mm size constraint. It is possible to also work on larger projects, providing that the individual pieces are no larger than the available print size. One designer created a print model for a recorder, you might remember them from elementary school music class. The project was made to be printed in a number of smaller parts, but when I looked at the possibility of printing it on the Borlee, I discovered that any one part was too large.

My option was to make the parts smaller, but that would make the instrument sound different and might not allow it to play the way it should. So for some things, I simply cannot print the project at all. For others, if size is not important, then I can simply resize to the max or any size below that. You must think within the limitations of your device.

I made more than one project with this printer. A few turned out well, while others did not. Some turned out great with a few minor exceptions such as clarity in lettering. Rather than describe all of that here, watch this video for more details. It will explain more about each project, and give you my thoughts.

Ok, so I have probably just about taken up enough of your time for today, but I wanted to review my review a little more and tell you my final thoughts.

I know that this is probably not the most powerful printer out there. It has some limitations that I wish I could overcome, but for a starter printer, or simply one you might want to use for smaller jobs, I think it is great. It would have been terrible for me if I had spent more for a printer, my first time out, and gotten discouraged having to put it all together myself. Mechanics is not my strong suit. 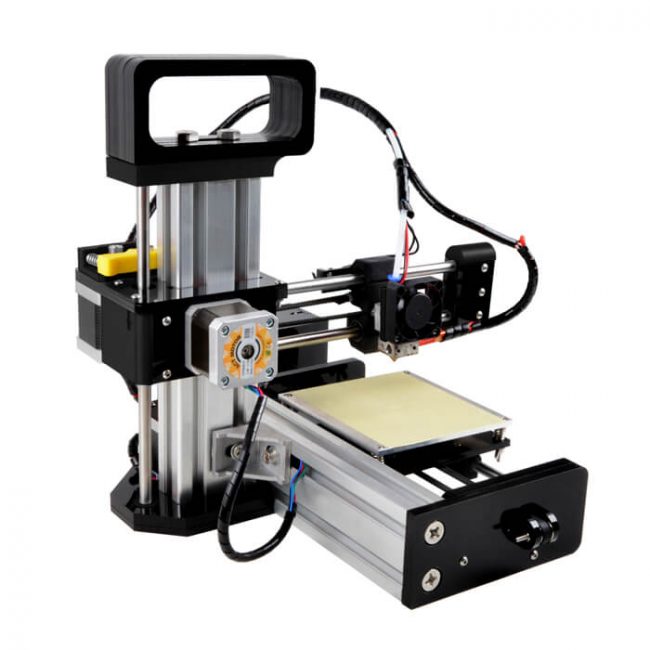 This printer comes nearly all put together for you and that is a good thing. In addition, as you can see, for the most part, all of the projects I printed came out pretty good.  Sure they need to be completed a bit with cleanup work which honestly is a whole other discussion and one I have not completely figured out yet, but for the price, and for the first time 3D printer user, you cannot find a better printer. 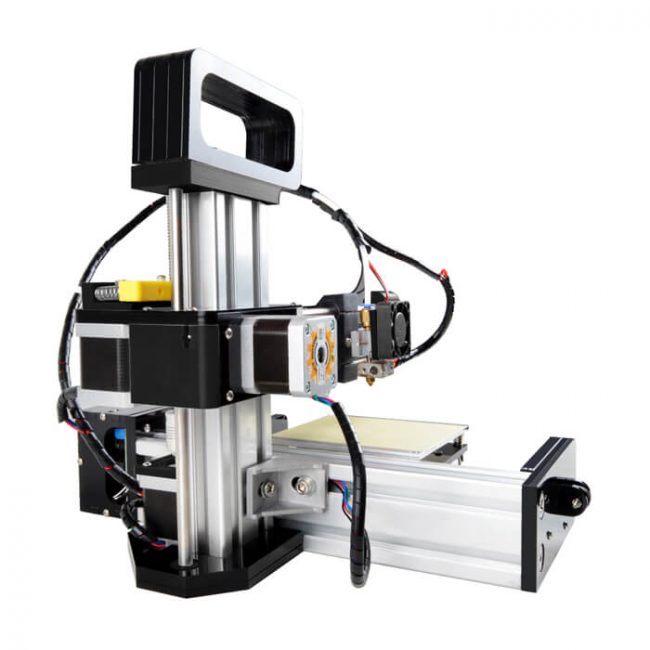 Links to outside sources of information. Use at your own risk. Neither dragonblogger.com or I, are responsible for any issues that might result from using any of the models shown on any of the sites, or any advice found on the websites listed. Please use at your own discretion.

When things don’t go as planned. this is also a paid software, not sure of compatibility.

Create your own 3D image to print

Lowest cost, for greatest quantity printer plastic I have found on Amazon.

One last project that I printed to me shows just how great this printer is. Enjoy.

Disclaimer: Borlee provided me with their 3D printer for review. All opinions are 100% mine and mine alone.