Last month, Luxa2 added another product to their Lavi headset lineup with the launch of Lavi X Sports Wireless Earbud Headset. As the name suggest, this is a dual wireless in-ear headset, first full wireless in-ear headset in the Luxa2 lineup; they’ve previously also released a semi-wireless headset called Lavi O. Luckily, we’re among the very few people who got the chance to review the Lavi X, so let’s get right into it . 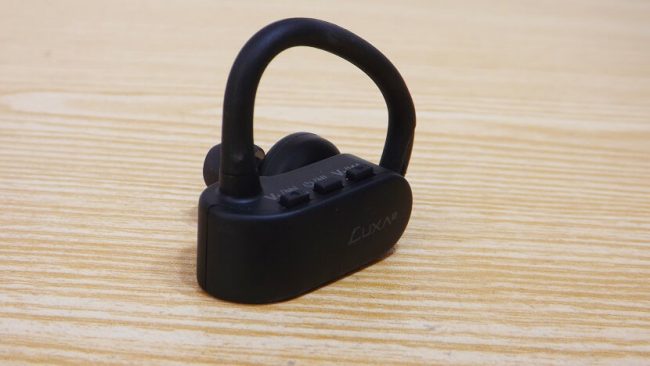 The wireless headset features a special anti-slip hook that goes around your ear; keeps the earbud in position even during exercise and features dual-pairing mode so you can use both the headset at a time, not like the Bluetooth earpiece that only has one side.
So let’s take a look at the unboxing: 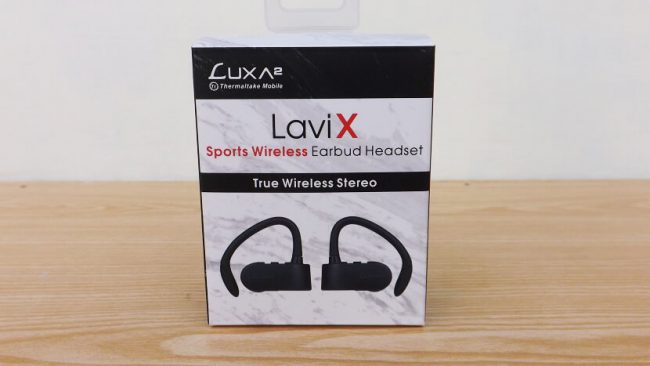 Since earbud headsets don’t require a lot of space, we get the Lavi X in a small cardboard box with a picture of it on the front along with the product’s and company’s name. 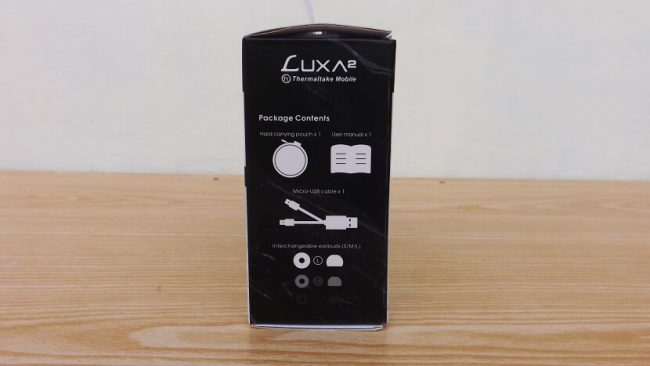 On the right side, we have the contents that we get along with the headset listed. We get 3 sets of interchangeable earbuds; that’s awesome as people who like to share headsets can have better comfort as they can adjust the earbud size now. We also get a hard-carrying pouch along with the Lavi X, again awesome because, first, you don’t have to mess around with wires as Lavi X is a wireless headset. And secondly, you can just place the Lavi X in the pouch and bring it anywhere with you without the tension of damaging it during travel. We also get a 1 USB into 2 microUSB cable for charging the headset and a user manual. 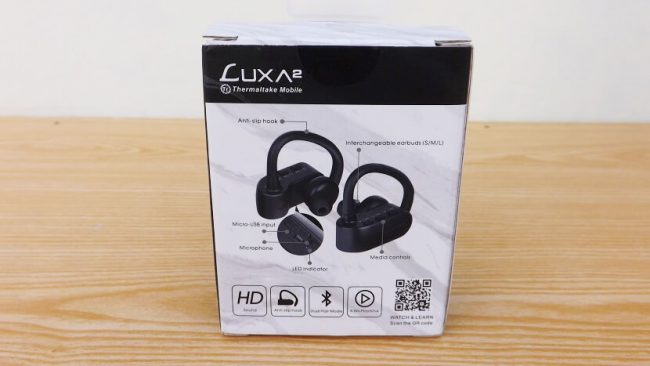 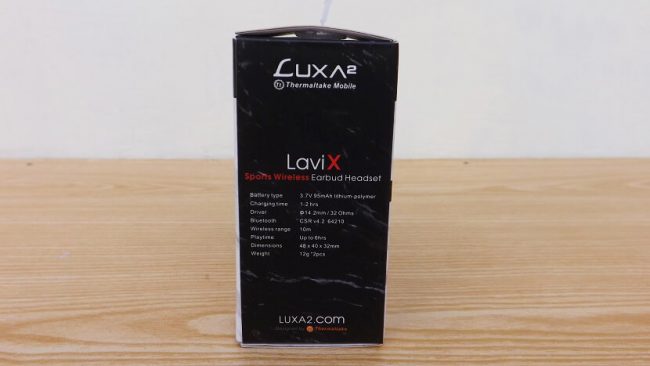 Finally, on the left side of the box, we have the detailed specification of the headset. 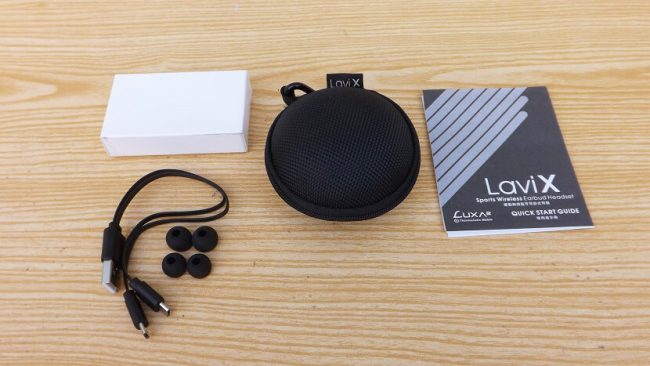 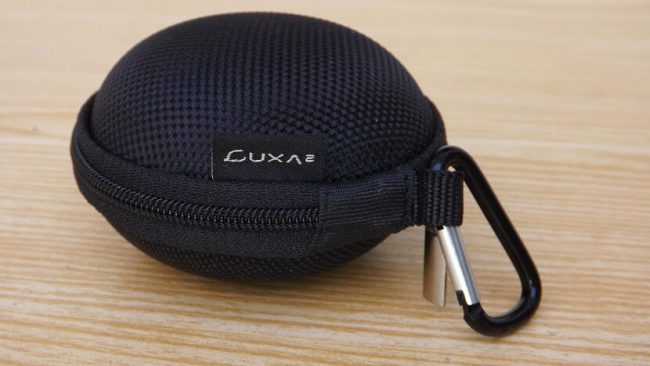 After opening the box, you will find the hard-carrying pouch, the instruction manual, and a little white cardboard box, but no Lavi X as they’re placed inside the carrying pouch.
Inside the little box, you can find the charging cable and a set of small sized and large sized earbuds which mean you get the Lavi X with medium sized earbuds installed.
So let’s go ahead and take a closer look at the headset. 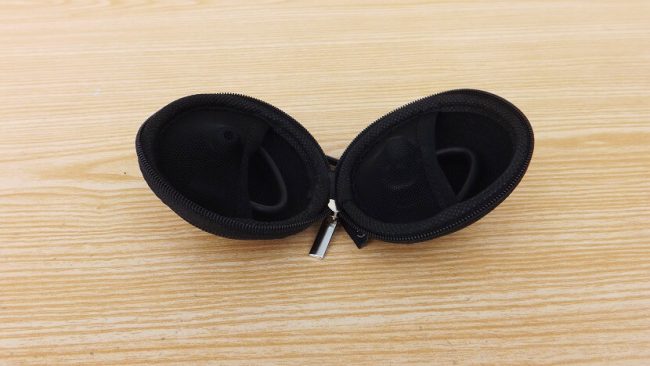 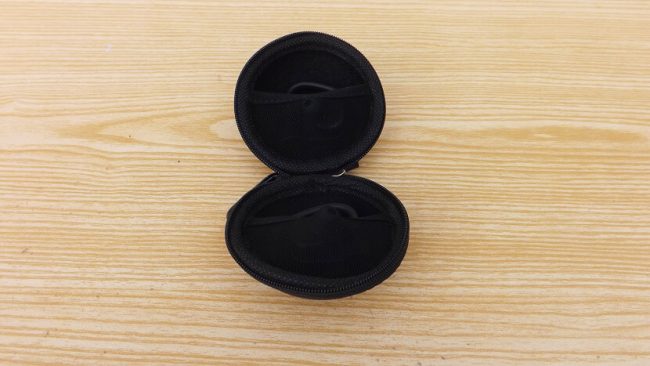 So that’s how the headset is placed inside the hard-carrying pouch. You even get a net cloth cover to keep the headset from moving inside the pouch for max safety. 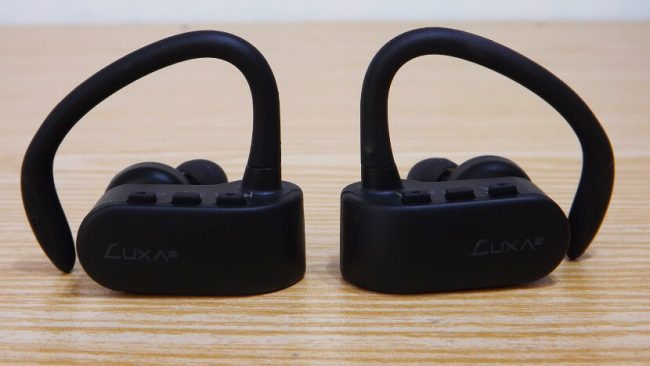 And that’s how the Lavi X pair looks like out of the box. A perfect black colored headset with anti-slip hooks going around the top. So, on the viewer’s visible side, you can see the company’s logo printed perfectly to catch the eyes and let people search for the brand. Now the anti-slip hooks are not memory hooks, I mean you can’t bend them in shapes and they’ll stay like that, but they’re indeed flexible so you can adjust them to some extent for your comfort once worn. 3 buttons also visible in this picture, let’s take a look at them in the next picture. 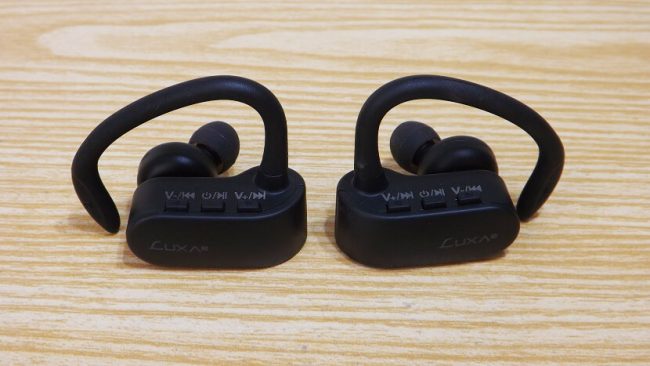 So, you can see that these three buttons are -volume/backward, power/pause/play, and volume+/forward. One press for pause/play/volume+/volume- and press and hold for power/next/backward. We have these buttons on both side so you can access the function regardless of whichever earpiece you’re using. 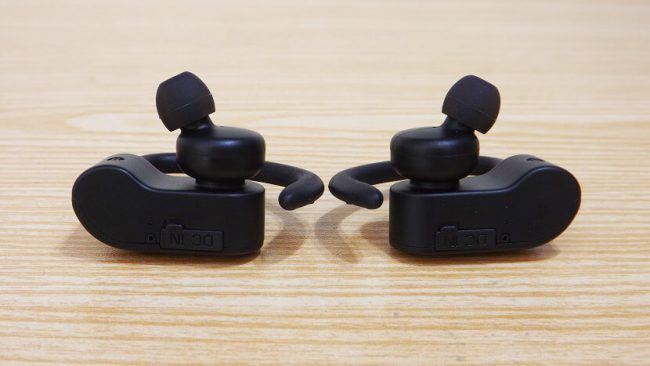 That’s how the bottom of the Lavi X looks like. Here we have the microphone hole, yes we have microphone hole on both earpieces, then we have a little dot above that whole which is the LED indicator, and right beside them is the DC IN or microUSB charging port which looks huge in comparison. From here you can have an idea of the earbud placement as well. 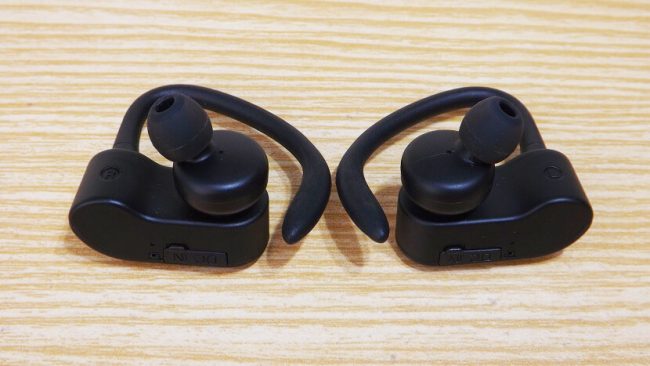 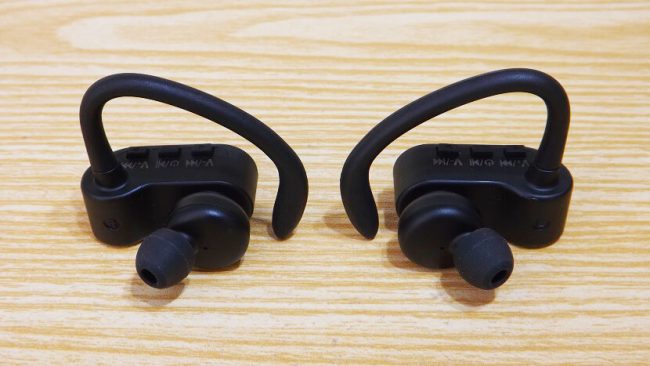 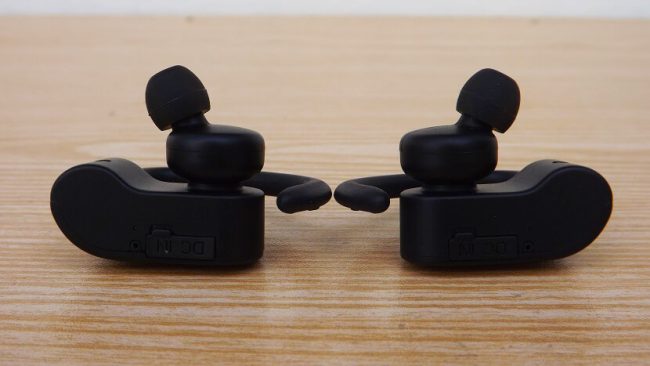 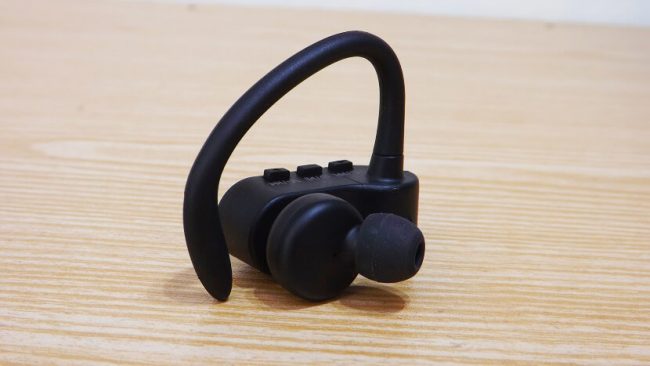 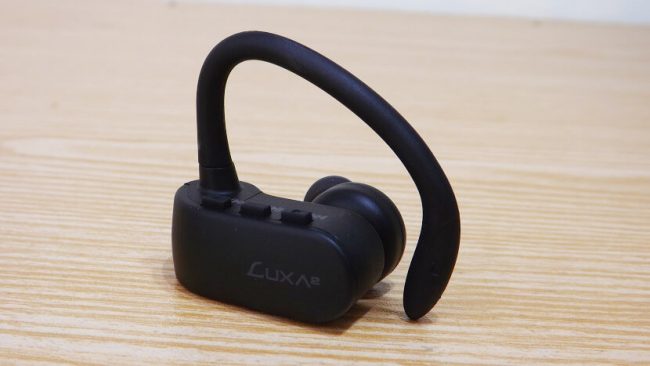 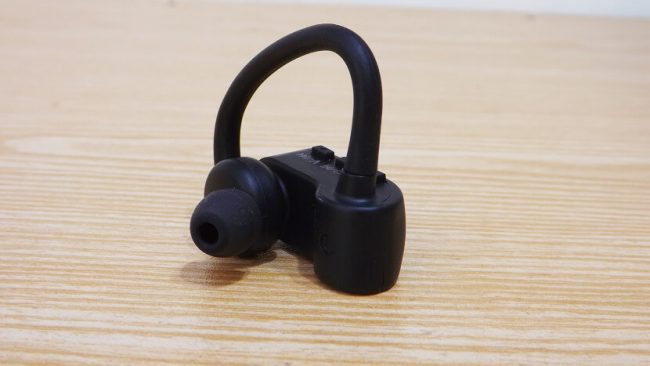 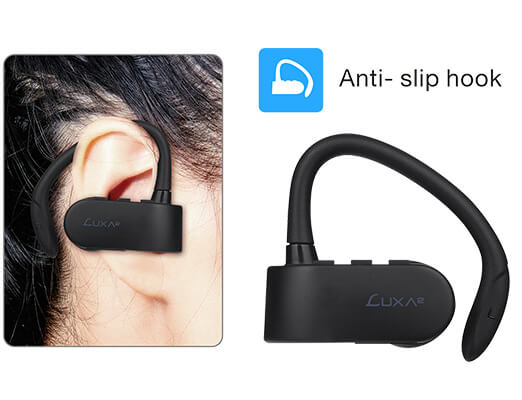 The Lavi X is very lightweight, 12 grams on each headset so you won’t notice you’re wearing something after a while. I’ve also accidentally and purposely fallen the headset to check the quality of the body from 2 feets and they’re still in good shape. But there are two things that need a little work to be done. It’s the length of the headset and the LED placement. Length-wise, the earbud side of the headset is sometimes touching the upper ear bone (Auricle pinna/Crura of Antihelix, yup, googled them) if not placed correctly, you might not notice it, but once you take off the headset, you’ll immediately notice the pain there. But for the time it’s not touching that place, it’s comfortable to wear and has a perfect fit for your ear so that you can do your activities and exercise without worrying about the headset falling off.

And LED-wise, the position of LEDs is awkward. It’s placed at the bottom of the headset. Usually, your thumb will be covering that place while you’re powering on the headset. A better placement would’ve been the outer visible side of the headset or the ends of the headset. 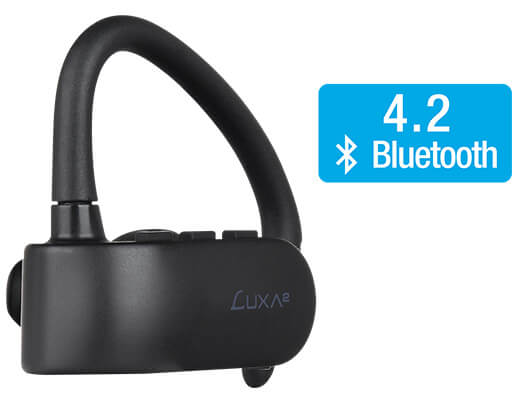 The Lavi X only has one way for the connectivity, and that’s via Bluetooth. It features Bluetooth CSR v4.2 and has a range of 10 meters. The connection process is really easy, you just press the power button on one of the headsets for 7 seconds to enter into the pairing mode (LED will blink red/blue rapidly) and connect it to the desired device then power on the other headset by pressing the power button for 3/4 second (LED will blink blue), and it should automatically connect to the device creating a stereo setup (LED will blink blue slowly).

Though there are some issues with the Bluetooth connection of the sample I received. Like sometimes, one of the earpiece will go silent for 1 second and start working again. This issue was usually triggered when I was listening to music for long continuous hours or I was moving fast, like on bike or bus. One time, I also faced an issue where the audio won’t transmit from the smartphone properly, and the left and right pieces would play the track out of sync. The frequency of these issues occurring is very low, but if it happens, it’ll fix itself in a few seconds or a quick restart of the device will fix it.

This is something that depends on from ear to ear; some people might want higher treble in comparison to bass while other might want more bass and vice versa. But to get an idea of what’s being produced through those 14.2mm drives of Lavi X, we get very clear vocals from the headset and the bass is good as well. But it seems like the bass is somewhat underwhelming. But those drives are not just for the number, they are really loud. They go up to 104dB +-3dB which is as loud as a power mower.

Also, you’ll notice a little distortion at max/high volumes so it’s better to keep the sound where the sound quality is clear and loud enough to prevent damaging your ear or the product. So, not really happy with the drivers, maybe a smaller and better quality drive for the Lavi X would’ve been a better option instead of going with the largest they could fit.

As for the microphone, when you’re using it for calls in dual pair mode, only the right side piece is active once you pick up the call. The left piece becomes inactive for the duration of the call and reactivates once the call is done. Though the Lavi X has microphone on both piece, so you can use the mic on the left piece as well just as long as you have the other piece connected to another device.

As for the quality, the voice is pretty clear but with a lot of background noise and it can make it difficult for the person on other side to hear properly if you’re in traffic. Here’s a mic test sample: 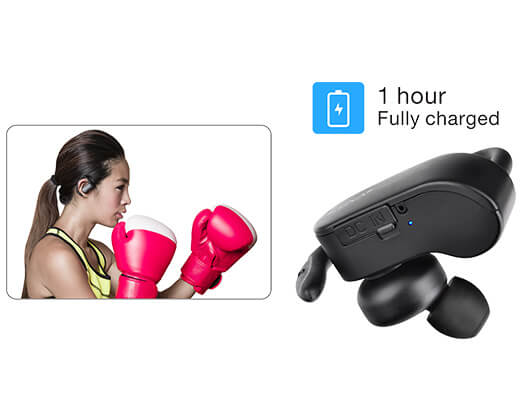 The Lavi X Features a  3.7V 95mAh Lithium-ion Battery which takes up to 1 hours to 80 minutes to completely charge from 0 to 100 while depending on your usage, it can give you 4 to 6 hours of playtime. So the battery timing seems good when you take a look at the compact design of Lavi X with individual batteries on each piece.

So, after a few weeks of using the Lavi X, I can say that the Lavi X is a good companion for people who loves traveling or exercising and like to stay connected to people without the trouble of going through and taking out the mobile from their pocket for picking up calls or just like to listen to music. Previously I used take Luxa2 Lavi S or some other over ear bluetooth headphone with me when I go out, but now thanks to the no wires attached and portability, I take Lavi X with me.

Even though Lavi X lack on the lows a bit, the vocal and music is pretty clear, it doesn’t sound awkward at all, no issues there. Maybe I’m used to a 50mm drive headphone with awesome bass so the lows on the Lavi X seems underwhelming for that reason and they are indeed balanced, just something you should know. But we still have some distortion at high volume so that places the driver in question and then we also have some connectivity issues with the sample I received.

The review was supposed to go live on the same day as the launch date of the product but because of the connectivity issue, I postponed it and contact Luxa2 about the concerning issue and they tested some Lavi X on their sides both on android and apple devices but they couldn’t find this issue on their hands so I’m just assuming this one might be one of the bad apple in the batch. So yea, just make sure you have the most up to date firmware for your device for the utmost compatibility with the device and if you face any issue with the device, Luxa2 will be there for your help with the quick responses.

Other than that, the headset is very comfortable with each piece weighing only 12 grams that you won’t even feel them after a while with a battery time of 4-6 hours to keep you accompany for your long distances.

So let’s come down to the last factor of the review, the price. The Luxa2 Lavi X has and MSRP of $39.99 which seems a little higher than what I’ve seen in the market, a lower price tag would’ve done a better job in the market.

So I would like to rate the Lavi X a 4/5 star because of the drive quality and price.

I really like the product and will get it as a gift to gift to my friend on his birthday along with some other things from www.abestfashion.com particularly something that has to do with the latest mehandi designs.