Your default Windows Firewall isn’t nearly as effective as you would believe when you compare it to how much Bot Revolt blocks when it is running on your system.  I spent several days doing an extensive test of Bot Revolt when the company asked us to review it and let readers know what we thought of the software and if it was something we considered worth endorsing and sharing with our readers.  See the bottom of this article for your chance to enter to win a full 1 year subscription to Bot Revolt too!

Also, readers who don’t win can get a special discount and pay only $9.99 for your 1st year, this reduces the cost from $47 to only $9.99 and is too good a deal to pass up. Just apply DRAG-KSKB-BLOG at the time you add Bot Revolt to your cart to discount the price.

What makes Bot Revolt different is that it isn’t just a one way inbound firewall, it will help block malicious network activity both ways and has a growing list of bad IP’s that it constantly updates to make sure you always have the latest IP threats added to it’s guard list.

After you install Bot Revolt you are going to want to make sure you set the configuration to show you what is being blocked, don’t log all or your mind will go numb and you will never be able to get a full grasp of the good from the bad. 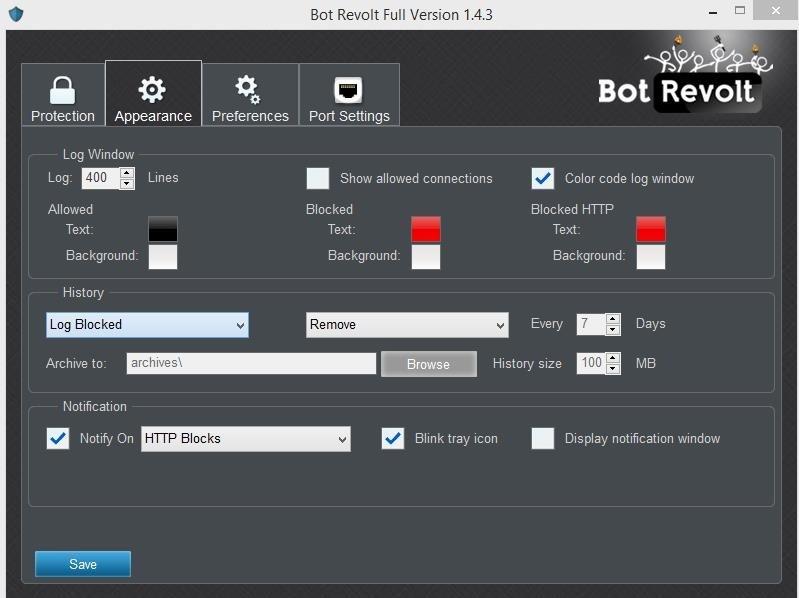 Within only a few minutes there is a dizzying amount of traffic that comes through in it’s real time logs if you don’t have it set to log blocked only.  You can see the master block list at the time of my testing had over 1.1 billion IPs.  But for some reason even with log blocked, it always shows verified safe connections with blocked on the live monitor on the home screen of the application.  I do wish it would not display the safe connections at all and only show up the blocked or red flag warnings. 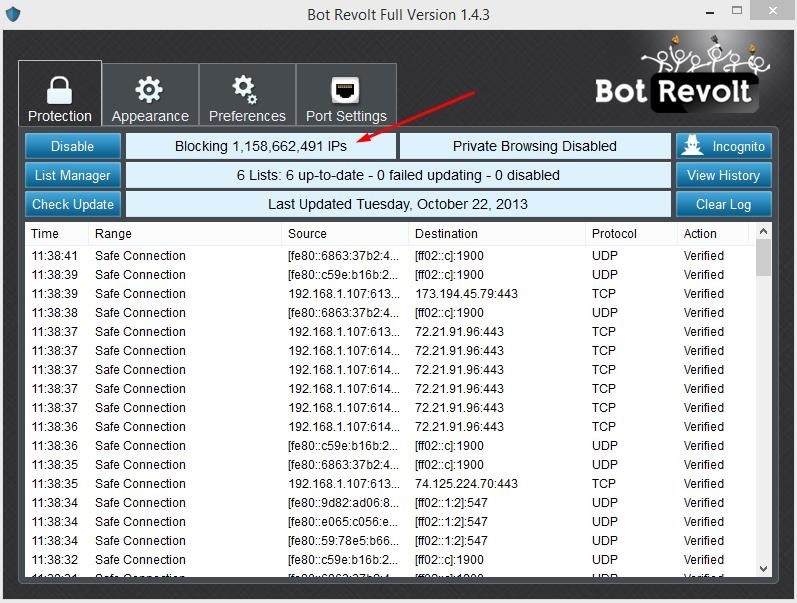 You can configure your automatic updates and list updates, I set this to every day but you can set every other day just as easily if for some reason you don’t want it to do daily updates. 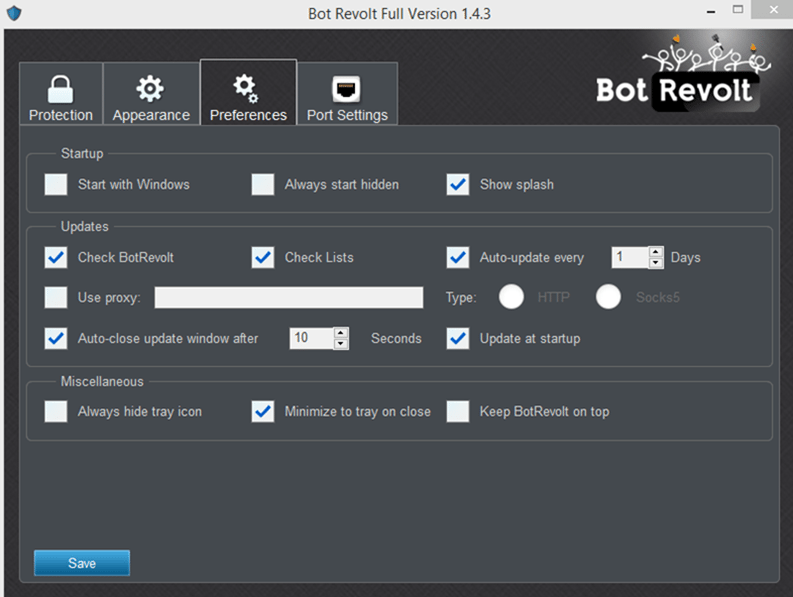 When you have a piece of software inspecting every single inbound and outbound packet, my main issue was to check to see how much it interfered with my Internet speeds and my daily usage of applications and games.  I can tell you with Bot Revolt running there was no noticeable impact to my speed tests with various applications and testing with speedtest.net over 20 times across 4 days with Bot Revolt enabled and disabled. 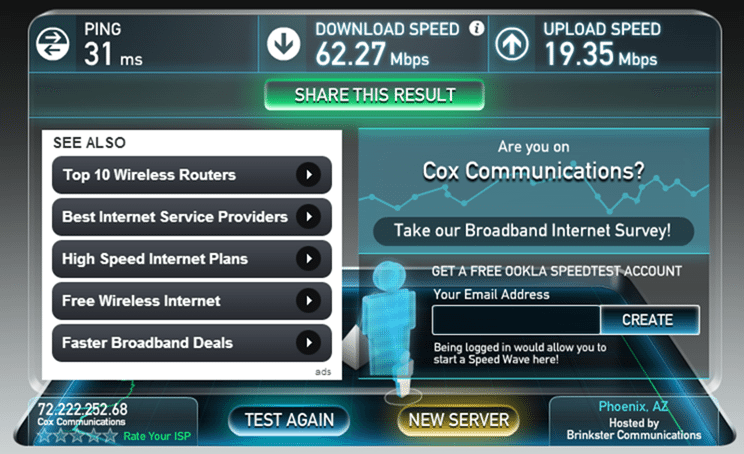 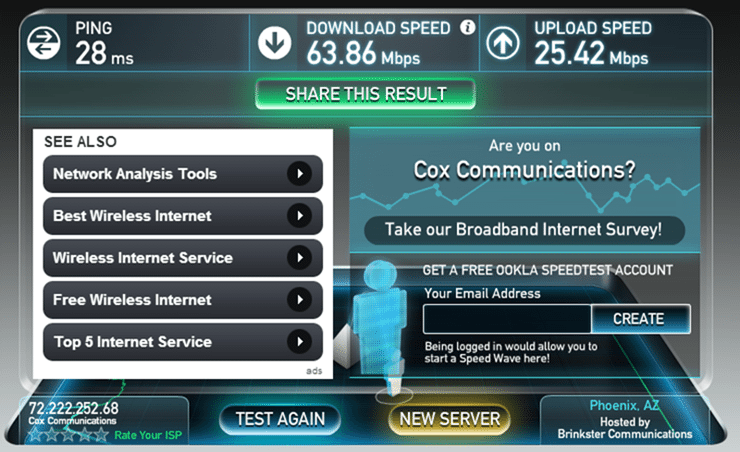 It is just coincidence that the enabled screenshot is faster but they were hovering around the same numbers each time, so you won’t get any speed degradation if you are running Bot Revolt to help protect your PC.

When you play online games though, this is where Bot Revolt may be a little bit of a pain, it prevented World of Warcraft, Guild Wars 2 and Runes of Magic from working immediately throwing up blocked flags and warnings. 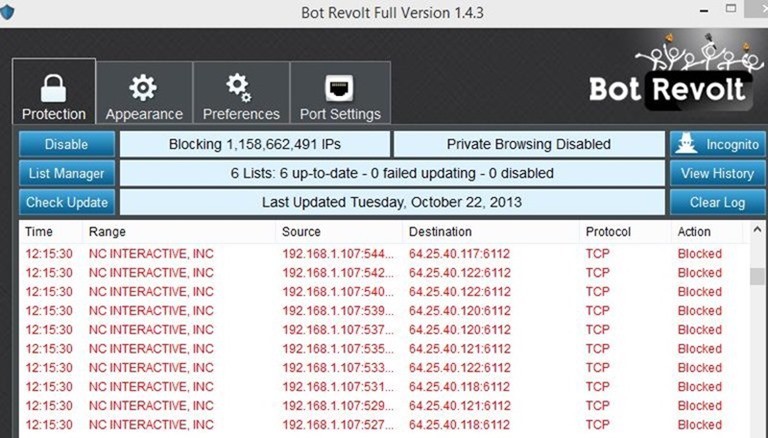 The solution is simple, you simply right click on the IP into the and you have an option to allow it permanent or for 1 hour…etc.  However, there are many IP’s in game company clouds and you may not catch them all, so it may be easier in this case to identify the ports and simply create a manual allow. 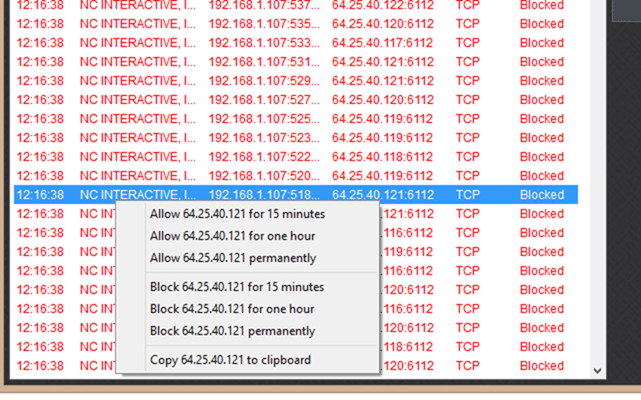 I saw in the above IP that all GuildWars 2 outbound traffic used port 6112, so I simply added port 6112 to the port settings page and voila, no more bad IP warnings. 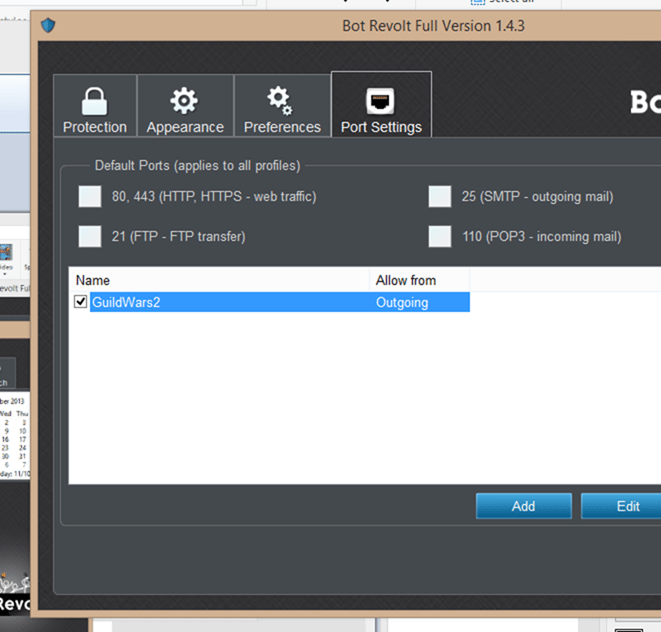 You can also just simply disable Bot Revolt without existing the application and re-enable it when you are done gaming too if you don’t want to deal with building IP whitelists and allows.

Just right click on the Bot Revolt icon in the task tray. 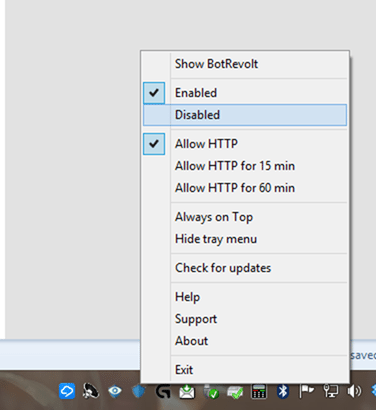 Really the minor issue of it blocking gaming servers by default until you define them as allowed is a small issue compared to the security knowing your PC is protected from malicious activity both inbound and outbound.

Bot Revolt also has an Incognito Mode Button which will put your computer in Private Browsing Enabled Mode.  This setting will basically make it so websites don’t know who you are or where you are coming from and keep you anonymous when browsing online. 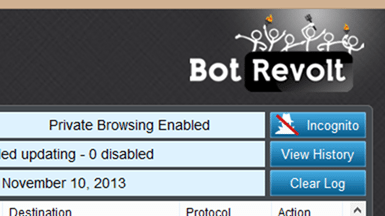 This goes above and beyond simply Incognito mode in Google Chrome or Privacy mode in Firefox, but can interfere with websites that require some IP identifying information or something else I can’t identify, because bing.com won’t work while using Bot Revolt in Incognito Mode during my testing, though Google.com and some other tested websites didn’t seem to have a problem with it. 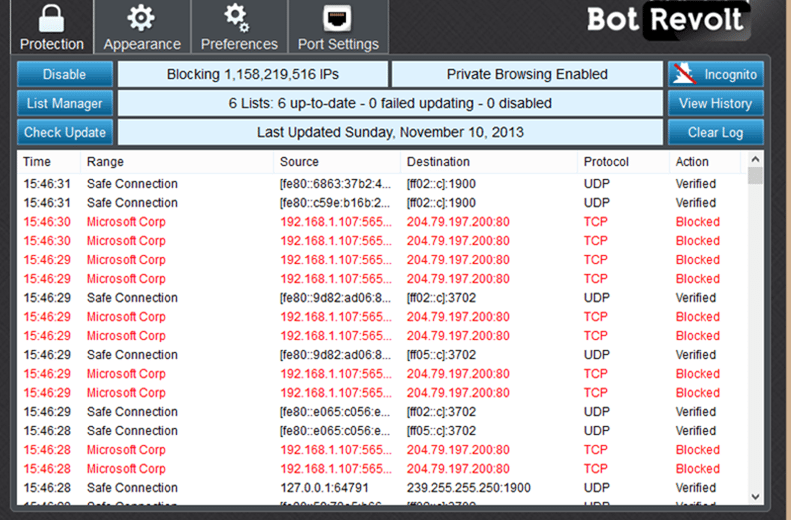 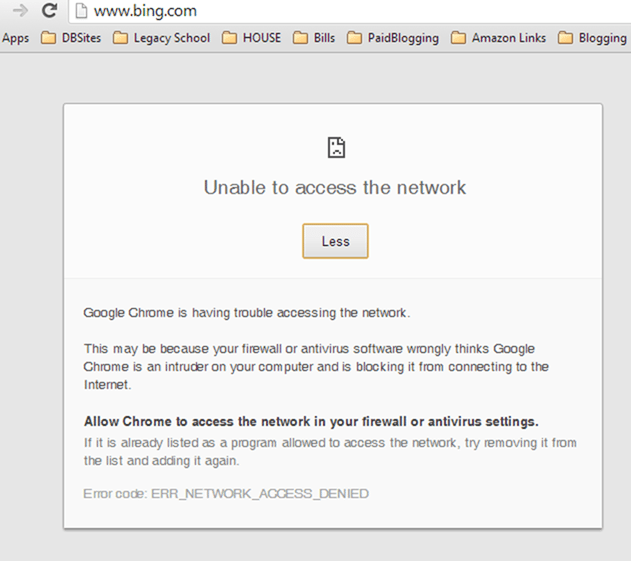 So overall I found the program to do a very good job blocking anything out of the norm from day to day operations but if you do a lot of varied online activity with your computer you may have to do some manual training of the software first.  But if you just use your computer for email, browsing and don’t do much with the gaming or experimental software like I do, then this is a good way to keep your system secure.  Also one thing I would use it for is to keep it active and enabled all night while you sleep and just disable it during your normal daily operation if it interferes with your day to day usage too much.

It wasn’t just Bing either, Amazon won’t work with Incognito Mode enabled either, it is so restrictive you just can’t get to Amazon.

So note that Incognito mode will prevent you from accessing most sites that are doing something to capture your IP and location information.  Ironic that Google is a site that works fine with Incognito mode working.

Bot Revolt has a free plan supported with ads that allows you to try the service, it doesn’t have the privacy mode or the automatic updates daily which the premium plan does however which adds 3,000+ new bad IP’s to the block list every day.  The premium price f $47 per year is comparable to that of your anti-virus or anti-malware program, but Bot Revolt rather than focus on analyzing the software, focuses on making sure nothing gets in and nothing bad gets out.  So even if the spyware software misses identifying something, you have that extra layer of security knowing that the inbound and outbound packets, ports are monitored and will be blocked.

Enter to Win a 1 Year Subscription to Bot Revolt

Get Bot Revolt now for only $9.99 for your 1st year
Dragon Blogger fans get a special discount where instead of paying $47, you pay $9.99 for your first year. This is a huge discount and I encourage all of my readers to take advantage of this offer. Use coupon code DRAG-KSKB-BLOG and apply your discount.