Despite all the rooting I was doing for Jesse (Aaron Paul) – the poor boy has a lot more worries on his head than “mad stacks, yo!”  Gone is the Jesse with the unyielding loyalty and blase approach to the troubles coming his way.  Of course this transformation had already made itself apparent at the beginning of the season but last night’s episode sealed it.  Walt (Bryan Cranston) kept relentlessly trying to make a man out of Jesse and ended up once again causing the two to be worse off than they started.  As always if you are not following the Breaking Bad fervor you can read our earlier episode review which will catch you up on this contagious series.

The tantalizing blood splatters at the beginning on the glass and shoes might have led you to jump to conclusions about Walt’s temper.  I knew plain well Walt isn’t going to off Jesse – however, I have to admit that the blood spots led me to believe that they finally caught up with Gus (Giancarlo Esposito).  What was up with Gus “going Terminator” by the way?  The man really is allowing cockiness to cloud his better judgement – nevermind, lets get back on track.  Regardless of what they may have led you to believe it was easy to see that Heisenberg was out for blood.

Queue Hank’s (Dean Norris) audaciously awful rendition of “Eye of the Tiger.”  Gilligan’s wordplay on songs, poems, and titles is beyond delicious.  Not only did I love Hank’s showtunes but also the exchanges between Walt and Jesse of pleasantries.  I burst out laughing when Jesse mentioned his favorite show was “Ice Road Truckers” and explained the show was about “Truckers driving on ice.”  In case you didn’t catch that, hint-hint another term for crystal meth is obviously…ice!  Sneaky phrases and lines like that make Breaking Bad’s dark humor even more exponentially awesome. 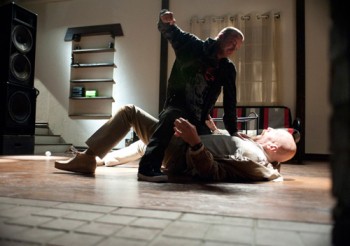 My heart at the moment does not only bleed for Jesse but Skyler (Anna Gunn) as well.  I have made it incredibly apparent in the past episode reviews how I view Skyler as the woMan with a plan.  This wrench in the works thrown in by her former boss is leaving me biting my nails.  The dumb blond routine was a good temporary bandaid to get the IRS off their case but that boss of hers is the most disgusting leech if I ever saw one.  I already knew Skyler was getting into dangerous waters but after he threw up his hands and said he simply wasn’t going to scrounge for any penny he had…I was ready to wring his neck!  Skyler needs to harden that golden heart of hers and realize he is not worth a single cent.

Jumping back to the dynamic duo of Walt and Jesse – the honeymoon is over now.  While I understand Jesse kept mum on his encounters with Gus so Walt would not flip out, he should know by now the one thing that sets off Walt the most is dishonesty.  Walt would have chalked up Jesse’s botched assassination attempts of Gus to poor guts if Jesse had only come clean with him.  I hold more of the blame on Walt however.  He is playing right into Gus’ trap like fly on sticky tape.  Rather than “bugging” Jesse’s car it would have done him a lot more good to secretly bug Gus’ rig…without the Chicken Man’s permission.  He needs to get Hank to clamp down on Gus – I feel he would have a better chance of avoiding scrutiny if Hank was able to reach Gus first.

Sadly its hard to say if Gus’ reign of terror will ever be demolished.  Now that Jesse and Walt are potentially each others most dangerous enemy…plans will fail due to the lack of trust.  Not to forget that Jesse is on his way to Mexico thanks to the Cartel negotiations with Gus.  It seems all Gus’ ducks are properly lined up.  He is relaxing his guard too much though…something in my gut tells me Gus will get 86’d.  The question is – who will be the one to do it?