LYMM, UNITED KINGDOM – December 12th, 2019 – Nomad Games are excited to announce Cat Lady – The Card Game is out now for Steam. Based on the physical game by AEG and Josh Wood, Cat Lady is a well-loved card-drafting game about being the very best Cat Lady you can be!

In Cat Lady – The Card Game, players compete against each other to prove who is the best cat lady! By picking up three cards at a time, players take turns to collect cats, food, toys and costumes to score points, making tactical decisions as they play. Cat Lady – The Card Game on PC features three different levels of AI to compete against, a global leaderboard, local multiplayer for up to 4 players, and achievements to collect.

The PC edition has some quirks which set it apart from the mobile adaptation too! The layout of the screen is wider, with a new user interface allowing you to see your cards at all times. Players will also be able to play online with the PC version of Cat Lady – The Card Game thanks to Steam’s Remote Play functionality. Players can learn more here: https://buff.ly/2QAhLrG

But the most important new feature in the PC version is that the cursor resembles a mouse! 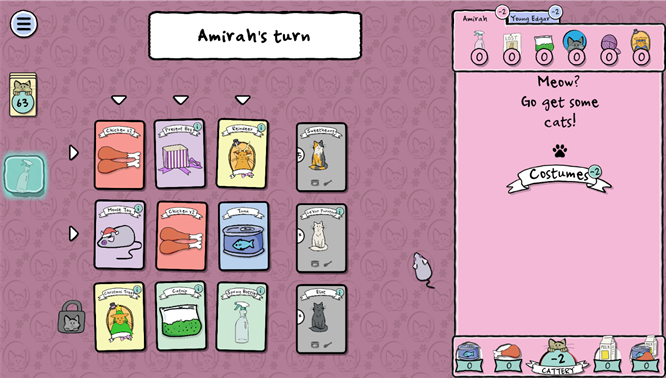 To celebrate the release and the seasonal time of year, Cat Lady – The Card Game will be launching with an adorable, limited-time Christmas makeover which includes a range of new seasonal toys and achievements for players to collect. Mobile devices will also receive an update so they’re able to join in the seasonal fun.

“Cat Lady is a game we know a huge number of players love, which is why we decided to bring that experience to a whole new audience by adapting the game for PC. We’ve rebuilt the game from the ground up, adding a whole new user interface for the PC platform. We can’t wait for you to get your paws on it! If you like card games and cats, this game has

Nomad Games is an independent video games developer and publisher based in Lymm, Cheshire. It was formed in 2011 by a small team of veteran digital developers, with over 20 years of experience. The company has evolved from the team’s passion for digital gaming on PCs and mobile devices and is expanding its business to offer publishing services to niche developers and license holders of tabletop games. The company is best known for its digital version of the classic Games Workshop board game Talisman, which has sold over a million units on PC, Mac, Android and iOS formats.

the popular board games Smash Up, Mystic Vale, Thunderstone Quest, Cat Lady, Space Base, War Chest, and many more.