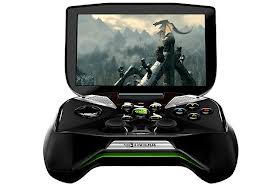 The Nvidia Project Shield is a portable game controller that will play android apps and computer games. Just in time for CES 2013.Running the Android operating system Nvidia hope it will turn out as the next step up for hand held computer and android gaming. To play pc games a player must have a computer in their house turned on and it must have a geforce gtx 650 or higher, it will then connect and you will be able to play nearly all pc games. The console comes built in with a 5 inch screen, 1280×780 HD multi-touch capabilities and has the new Tegra 4 which is step up for mobile processors. It is layed out with two analog sticks at the front of the controller, on the right hand side it has 4 buttons much like a console controller.  The console can play any android game on google play or on the Nvidia Tegrazone store, Also it has support for Steam’s Big Picture Project which will allow subscribers to Valve’s digital download service to play titles on a TV.

Other features include multiplayer gaming through Wi-Fi, bass-reflex speakers and the ability to run Netflix and other on-demand entertainment apps. On the console there is a HDMI port for video output and a mini usb and micro sd slots. Tegra 4 is Nvidia’s newest processor and is the first of the quad-core ARM chipset. The company has claimed that the design is so power efficient that users can watch HD videos for up to 24 hours. 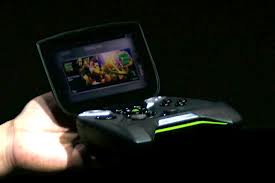 The company’s CEO Jen-Hsun Huan said this about the Project Shield, “We were inspired by a vision that the rise of mobile and cloud technologies will free us from our boxes, letting us game anywhere, on any screen,” said CEO Jen-Hsun Huang. “We imagined a device that would do for games what the iPod and Kindle have done for music and books, letting us play in a cool new way.” Hopefully this means that the price for the Shield will not be too expensive and will  go nicely as a casual/mediocre gaming device.

CES2013 looks as if it will raise the standards for technology as we know it and the Project Shield in no way disagrees. Here is Nvidia’s real time trailer for the device: