Well The Following is certainly making some people scared to watch the show alone, and Chapter Two has only made this worse.  While this episode starts off a little slower than the first, it does make you sit up and pay attention rather quickly with some background on Emma; since we’ve learned that Denise was an alias; and how Joey’s abduction is being handle.  Plus there is the introduction of Debra Parker, who replaced Jennifer Mason after letting Ryan break Joe’s fingers.

Emma has Joey convinced he has been taken away to protect him.  The poor child keeps asking if he can call his mother, to which Emma replies that Claire said it’s not safe to call.  Joey buys it but is still upset every time it comes up and at one point asks Emma why his father is a bad man.  Her reply “Maybe he isn’t.”  You have to wonder what she really wanted to say at that point.

As the FBI team digs into Emma’s past they discover that she visited Joe in prison, along with Jacob and Paul.  The viewers get to see how Emma became one of Joe’s first followers when she first met him during a book reading and he signed her book.  Unfortunately, her mother flirts with Joe, which upsets Emma.  Later Emma visits Joe in prison and has cut her hair to the length we know her to have now.  Joe tells her he knows someone she will like.  The next flashback of Emma is dinner at her house with her flirtatious mother and Jacob.  As her mother goes on about things Emma wants her to not talk about, Emma stabs her mother in the back killing her.  Jacob’s only comment, “you did it” in awe.  Not sure if that was something Joe wanted her to do and she found the opportunity or Jacob was just glad to see she was capable of murder since they are both in Joe’s circle. 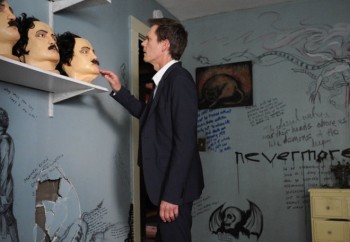 One thing the FBI finds is Emma’s house.  When they investigate it, the doors are locked, and while the FBI can’t legally do anything about it, Ryan can since he isn’t an agent.  Breaking in through a back door (with no backup or weapon) he searches the house.  One room has several Poe masks, which is creepy all by itself.  However, as Ryan looks through some other things we see one move in the mirror and attack Ryan.  The man gets away (we later learn his name is Rick from a conversation Emma has with Jacob and Paul) and the FBI can now explore the house.  The attic reveals nine different people’s handwriting on the walls and Mike Weston finds Emma’s mother’s desiccated body in the wall.  At least now we have another Poe reference other than “The Raven”, The Cask of Amontillado.

Back in Emma, Jacob, and Paul’s world things aren’t all rosy.  Paul keeps acting jealous about Emma getting all their intel first hand.  He also seems jealous of the relationship between Jacob and Emma but whether that is because he feels like a third wheel or he actually did develop feelings for Jacob, it’s hard to tell right now.  It will be interesting to see just how long this tenuous truce lasts.

Jordy, the stupid psycho guard, turns out to be a little more smart than initially shown.  He uses his “cop” outfit to gain entrance into the house we saw the previous week and kill several women in it.  I’m not totally convinced he is capable of doing this by himself without at least one of them escaping but apparently, he did.  Of course, this is so that the FBI’s attention will be elsewhere while he breaks into Claire’s house.  No one realizes it until Ryan, Debra, and Mike are looking at some files found at Emma’s house.  The first two maps are of Sarah’s house; which brings no surprises at this point; but when the third is Claire’s basement, Ryan runs out realizing she is in danger, even with all the protection around.  Sure enough, Ryan finds Jordy with a gun to Claire’s head and says that this conversation is for the three of them.  As Ryan shuts the door, one of the agents tucks a gun into his waistband, unbeknownst to Jordy.  Ryan tries to convince Jordy to let Claire go, but he refuses saying this is how his chapter goes; either Jordy kills Claire or Ryan kills Jordy.  What kind of power does Joe have over these people who will die because he says they should?  Anyhow, Ryan distracts Jordy long enough to shoot him in the shoulder and Claire is relieved. 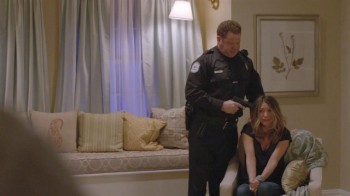 After Claire’s rescue, she begs Ryan to stay with her as she tries to get some sleep claiming she trusts no one but him.  Since they had an affair after she was divorced (how is that an affair?) and the feelings seem to still be there, he stays.  And while the pair are trying to hide this from everyone else, Debra has caught them holding hands so she realizes what is going on.  Then again Joe knows too and asked Claire about it when she visited him in prison to see if he would reveal where Joey was.  She didn’t deny it then but the other questions Joe asks, which is not stated but the implication about Joey’s father hung there, she said she doesn’t know.

Ryan asks to visit Joe again and Debra consents but makes sure four armed guards are in the room so Ryan can’t hurt Joe again.  When Ryan lets Joe know that Jordy isn’t dead, merely wounded, the look on Joe’s face is priceless.  His book isn’t being written he way he wanted it too.  Joe tries to ignore the comments and asks about the books he requested.  Once again James Purefoy is great at sending chills down your spine with just a few simple words.   Ryan tells Joe he won’t get anything but later Debra brings him “The Complete Works of Poe”.  The look on her face, and his, make you wonder if she isn’t one of the nine people Joe has in his local network. 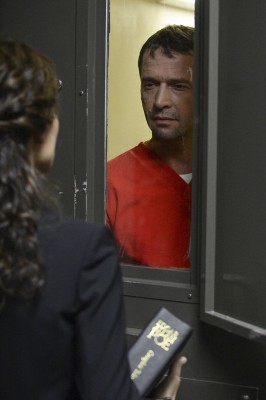 The real shocker for this though was the end.  An unknown man is purchasing food from a street vendor when Rick in his Poe mask walks up, douses him with gasoline, and sets the man on fire.  Is that Rick’s MO as a serial killer or did Joe tell him to do this?  Was the victim random (I find that hard to believe) or chosen?  These questions won’t be answered until at least the next episode but it definitely left the viewer with a lot to think about.  The biggest thing is can you really trust anyone you meet?