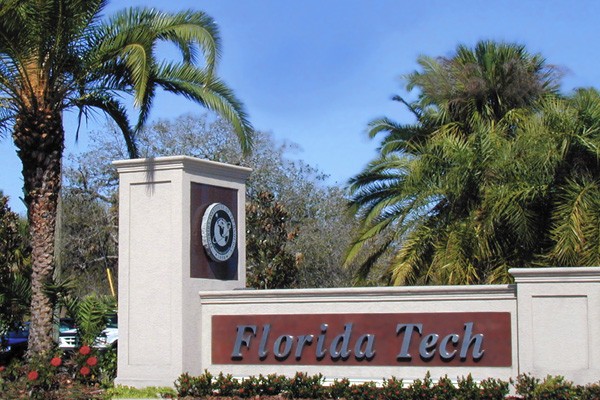 It’s about that time of year when high school seniors start applying to universities, so I thought I would take some time to share some information with prospective computer science majors. Because computer science is generally new and always changing, many high school guidance counsellors don’t know the majority of information that I am about to share with you, so please stick with me.

Step 1: Ask Yourself “Why Computer Science?”

The first step to choosing a university for the computer science major is asking yourself why it interests you and what you plan on doing after you graduate. Computer science is not the same thing as information technology, which many people tend to get confused. Information technology classes (networking, Microsoft Office, operating systems, web design) are difficult in their own ways, but they are completely different from computer science. Computer science and computer engineering are two similar majors that are normally offered in a university’s College of Engineering, so that means that students must take chemistry, physics, high-level mathematics, and other engineering courses just like electrical, mechanical, civil, and other types of engineering students do. Some schools also offer computer science in their College of Liberal Arts, but still often require the basic engineering prerequisites.

The reason I ask if you are sure about computer science is that many prospective computer science students switch majors after they realize that programming, algorithms, and computer theory are uninteresting to them. This isn’t a big deal, considering that the majority of college students switch their major at least once (I have), but it would be nice to graduate on time, and switching majors makes the process of getting a Bachelor’s degree take longer.

Step 2: Tell Yourself “Rankings are Bogus” 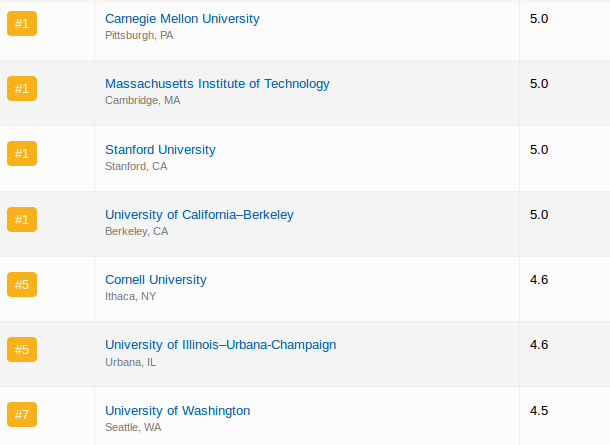 Although the rankings done by U.S. News, Princeton Review, and other companies are highly regarded by some people and institutions, they are also considered to be bogus by many professionals. According to the book (and website) Colleges that Change Lives by Loren Pope, many universities skew and manipulate their numbers in order to receive top rankings. For example, being highly selective raises the ranking of a particular university. University X will be considered more prestigious and “better” than University Y if X has an acceptance rate of 7% and Y has an acceptance rate of 48%. However, these numbers aren’t necessarily accurate. Lets say that I am applying for schools using the Common Application and see that University X is on there. I know that University X is highly prestigious and selective, but it’s only $30 to apply, so I figure it’s worth a shot. However, once I start applying for University X, I see that they require a ten-page essay as a supplement to the standard Common App, so I quit applying to University X because I know I didn’t have a chance anyway. There’s nothing wrong with me doing this, but University X has now included me in their acceptance statistics. I never had a chance of making it into the school because I didn’t complete the application, but because I started the application, I am considered a denied applicant. This lowers University X’s acceptance rate, which causes their “prestigious-ness” to increase.

Don’t get me wrong, the admissions processes at Cornell, Stanford, and Harvard are normally fair and accurate, but that doesn’t mean that they are the best schools to get an undergraduate education. There are plenty of universities in the United States (and the world) that offer equivalent educations without having to jump through all of the admissions hoops at the Ivies and elite universities.

The point I am trying to make is this: just because Stanford University is ranked at #1 doesn’t mean that it’s better than the University of Washington (ranked #7) or the University of Florida (not in the top 10). Choosing a school depends on the program itself as well as your personality and what you want your university experience to be. The University of Florida has an undergraduate of enrollment of over 30,000 people whereas the Florida Institute of Technology has about 5,000 undergraduates. Both offer computer science and both are located in the state of Florida, but they are each very different universities and have different atmospheres and personalities. Another example that’s different from both UF and FIT is a program that Reed College offers with either the University of Washington, California Institute of Technology (Caltech), Columbia University, or the Rensselaer Polytechnic Institute. The program allows students to get a Bachelor’s degree from Reed College (a liberal arts school in Portland, Oregon) as well as a Bachelor’s degree from one of the engineering schools listed previously.

Do not choose which school to attend simply based on the rank given by some bogus news corporation. Spend time researching all of your options, visiting campuses, and seeing which university is the best fit for your personality.

Step 3: Don’t Automatically Choose/Exclude a School Based on Price 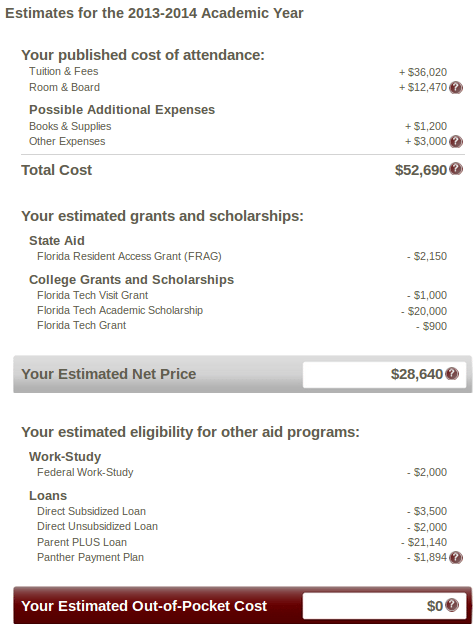 I am a Florida resident, so having the wonderful Bright Futures scholarship makes it hard to look anywhere besides a public Florida state school such as University of Florida or Florida State University. These schools charge about $6,000 for a year of tuition, and if you add Bright Futures to it, they are practically free. It makes private schools like Florida Institute of Technology look outrageously expensive at $36,020 for a year of tuition. However, I completed the net price calculator on the Florida Tech website (see above picture) and it brought the cost of tuition from $36,020 to $11,970. It still isn’t as affordable as the University of Florida, but it does help a lot.

I also completed the net price calculator for Georgia Tech (a Georgia public state school) and Stanford University (an elite California private school). I managed to bring my Georgia Tech out-of-state admission cost from $27,000 to $12,000 and my Stanford tuition from over $45,000 to just $14,000.

Please don’t automatically choose and eliminate colleges based on the raw tuition cost. Many private schools are able to give lots of grant money to hard-working students with a good GPA, ACT/SAT score, and high class rank. In addition, many schools will give need-based grants to students whose parents do not have enough money to shell out $45,000 a year in cash for college (which is almost everybody). Being a Florida resident, I see too many people simply choose the University of Florida because they can go there for practically no money down. It’s great to leave with zero college debt, but only if the University of Florida was the right choice. Don’t go to UF just because it’s inexpensive and don’t automatically exclude Stanford because it’s not. 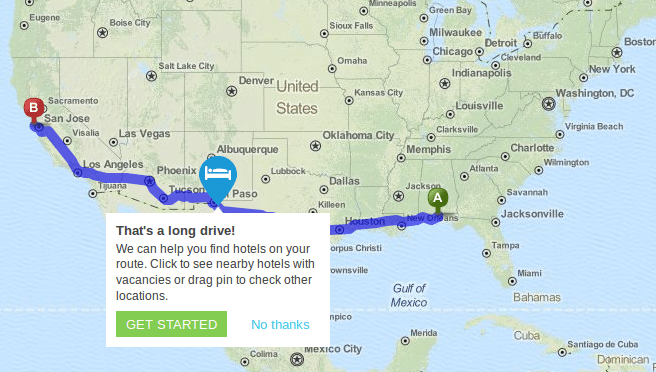 First off, I used Map Quest to see how far away Stanford University was from my house in northwest Florida. The answer is 2,400 miles, or 37 hours of continuous driving. That’s a long enough drive that I would only want to do it one time – when I’m moving from Florida to my apartment or dorm in California. That means that every time I want to come home for a holiday, I would need to book an expensive flight from San Francisco to Pensacola. It’s not the end of the world, but it’s definitely something to consider; especially when I can go to Georgia Tech in Atlanta (about 5 hours from my house), the University of Florida in Gainesville (about 5 hours), or Florida Tech in Melbourne (about 7 hours), which are all closer than Stanford.

Just like cost, however, location goes both ways. I see too many people choosing to go to a local university simply because it’s local. Yes, Florida State University in Tallahassee may only be two hours away, but if it isn’t the best choice for you, then don’t go there. Consider the distance from home, but don’t make your decision solely based upon it.

The other problems with location are the change of climate and setting. If you have grown up in Miami your whole life, going to the Massachusetts Institute of Technology will surely be a shock. Adjusting to the colder climate will take almost your entire four years of undergraduate work. I moved from Maryland to northwest Florida five years ago and I am just starting to adjust to the heat. I don’t even live in south Florida where it stays humid and extremely warm year-round, but it is definitely a huge change. It’s doable, but once again, if you were born and raised in Miami for 18 years, do you really think you can handle Massachusetts winters? Another thing that goes along with that is switching to/from a urban, suburban, or rural environment. If you grew up on a farm in rural Alabama, make sure you visit Cornell University in New York or Georgia Tech in Atlanta before deciding to go there. It will be an enormous culture shock to go to/from an urban environment to/from a rural environment.

Step 5: Do Your Research and Choose What Is Best For You

With that being said, here are some resources and schools I highly recommend checking out. These aren’t all of the universities with good computer science programs, but these are the ones that I have personally considered for myself. Hopefully it’s enough to give you a starting point with your research.

Book: Colleges That Change Lives: 40 Schools That Will Change the Way You Think About Colleges by Loren Pope