Hi my friends, I know if your like me you upgrade your computers all the time. Well most of us upgrade graphics cards and so on. Well today we take a look at Diamond Multimedia Radeon R9 390 Graphics card. My friends over and Diamond Multimedia sent me one of their R9 390 Graphic cards to test and review. One thing you should know is this is a beast of a card coming it at over 13 inches and weighs in at around 2 pounds. 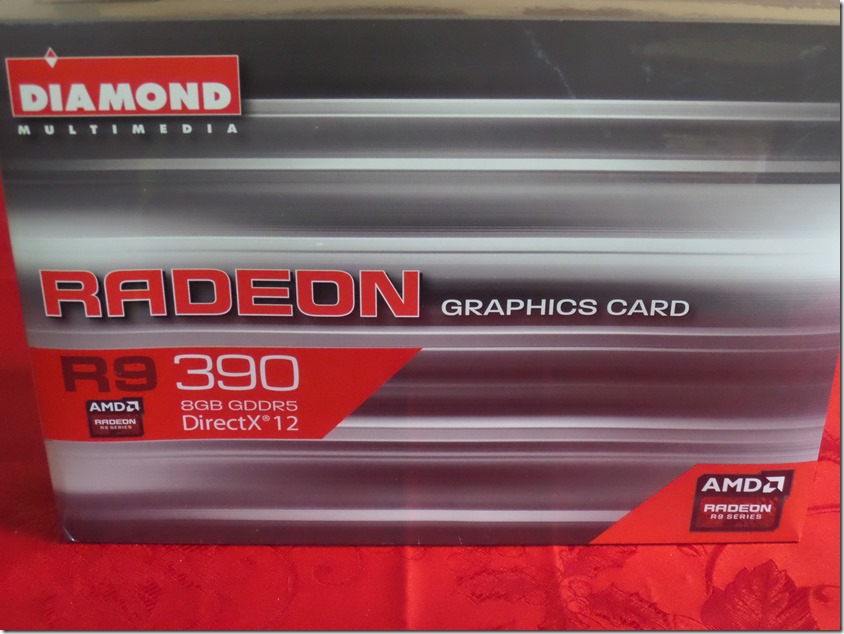 Let me show you there specs they list for the R9 390 in there store.

I will show you what all comes in the package in the next few pictures. 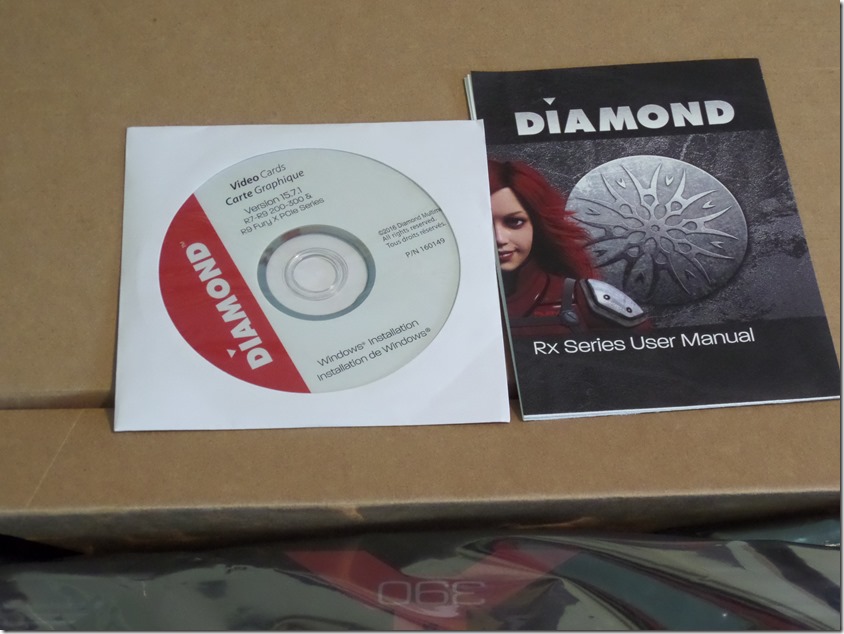 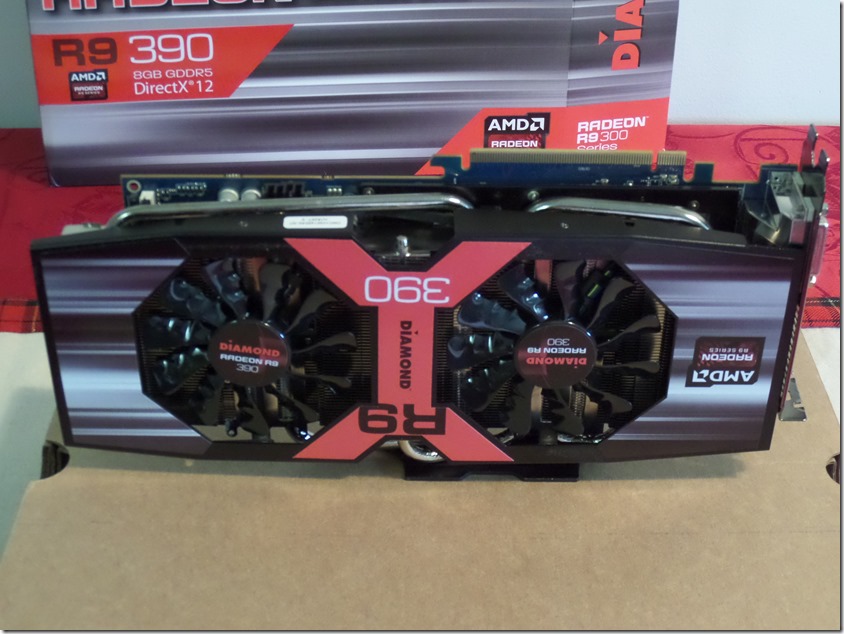 As you can see in the picture above it comes with a dual fan setup which is built on to keep it cool. You can also see the heat pipes protruding  out the top of the shroud.

The video connections can either be connected threw the dual DVI-D LINKS , HDMI LINK , or the Display port. Which are shown in the next picture. 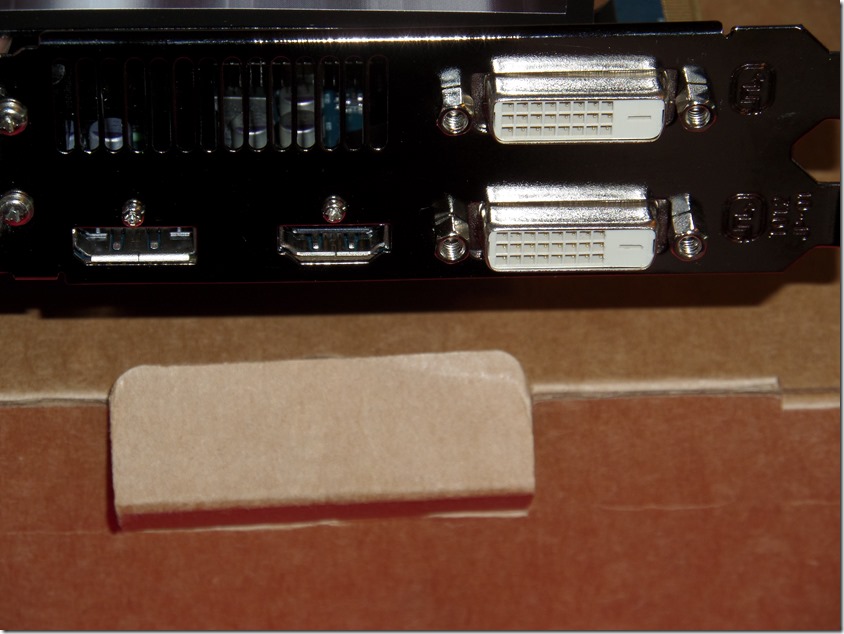 I will also show you a picture of the back side of the board on the card. 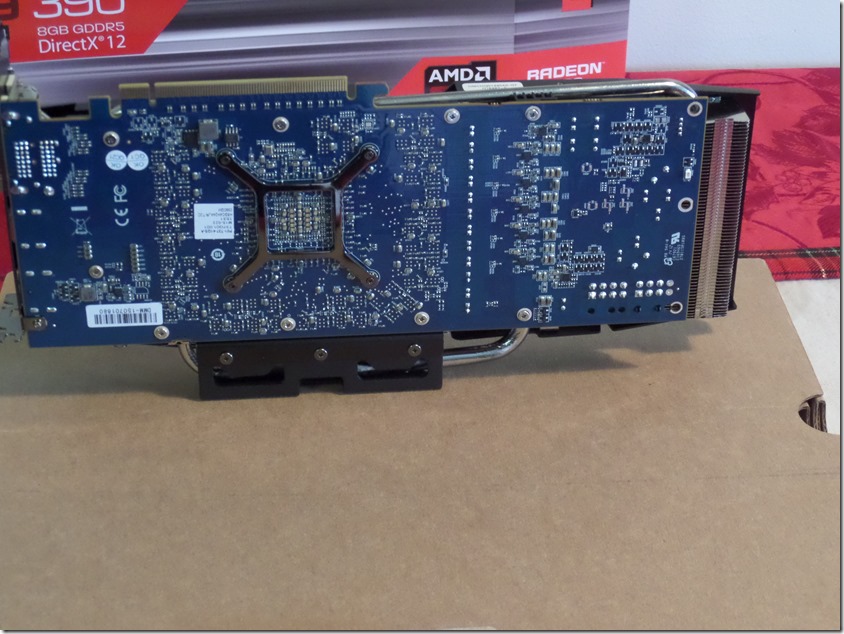 In the picture above you can see how the heat sink is connected to the GPU . You can also see the fins sticking out and the heat pipes like I stated before. The cooling is rather large. One thing I would like to mention is to make sure you have the space in your case before buying this card. This being due to the 13 inches plus length. You will also want to make sure that there are no other clearance issues that you may run into. In the next picture I will show you the length of it sitting next to my 980. 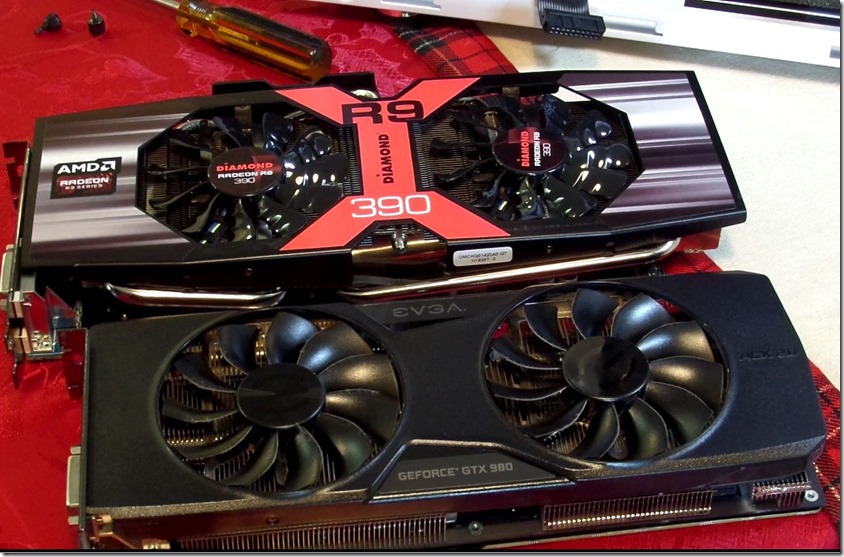 Watch my how to install video here!

In this next picture you can see it connected and inside my case with the side panel off. 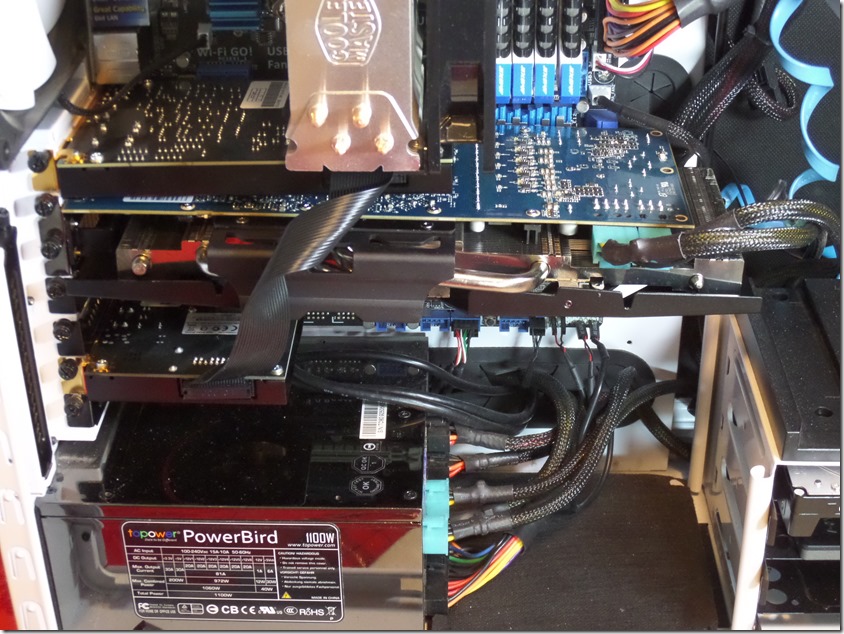 In the picture above you can see the two blue PCIE plugs that power the GPU.

You can see it look like it bending down slightly. This only looks that way. It is actually  the way the card is shaped. Now with the weight of the card you will want to make sure it is secured in place good. I doubled checked to make sure screws and the PCIE slot was pushed in tight.

Once the card is installed I suggest going to the Diamond Multimedia website or to AMD website and install the newest drivers. I know it comes with the disc but you can be sure that if there was an update from the time it was packed so make sure you get the newest ones.

I tested the card on a few games. These games included Thief. Grid Auto sport, GTA5, and Mortal Kombat X. I tested them both un-clocked  and clocked.

Before we get into bench marks and FPS let me tell you my system specs. Since you may not be running the same specs and the bench mark may be higher or lower depending on your specs compared to mine.

Here is the stock GPU-Z  read out. 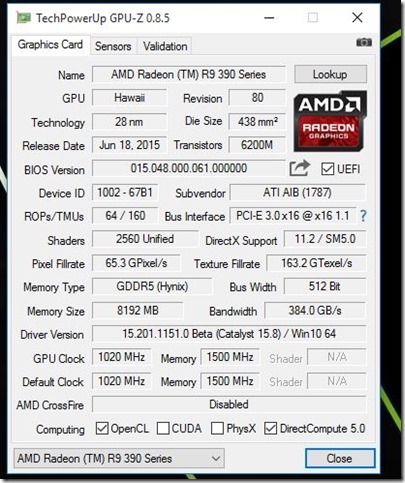 As you can see from the Gpuz  the Diamond Multimedia R9 390  is Hawaii based GPU. It also give the released date of Jun 18, 2015.  You will also notice that the stock speeds in specs show 1020MHz  are dead on in the GPUZ.

I bet your all wanting to get down to some benchmarks now. Well let start off with some 3DMark bench in stock clock settings.

As you can see it scored a 9,694 which is not to bad but could have been better. I’m sure I could have tweaked my system some more without clocking the GPU to get a little more out of the 390.

You can see here it only scored 78 percent better then others in R9 390 Scores. Now like I said some deferent settings may have scored higher. 78% is still respectable.

In the next bench mark you can see Grid Auto Sport scores. 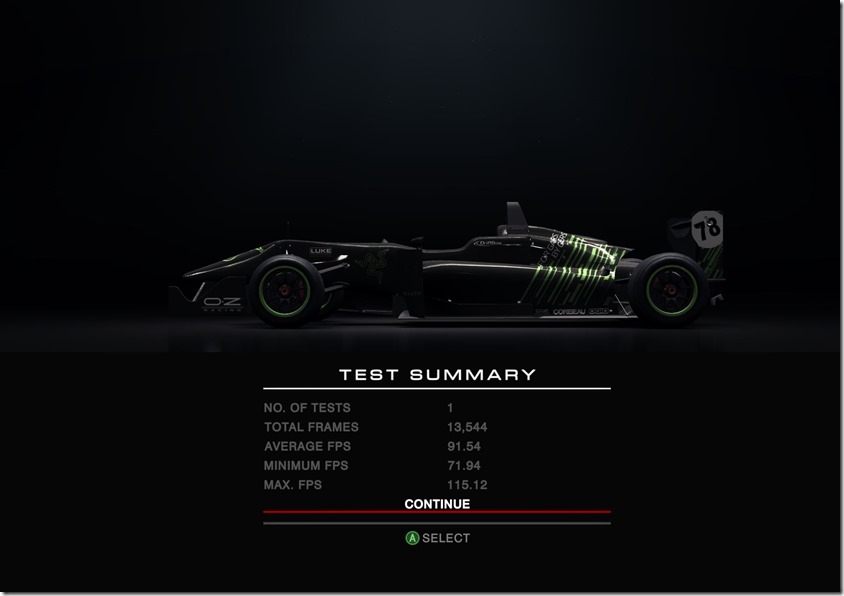 In grid your getting a average of 91 FPS  with a maximum of 115 Now that is a nice score. I will admit that it looks rather great also when playing. I will add some game play videos for you later on in the review. 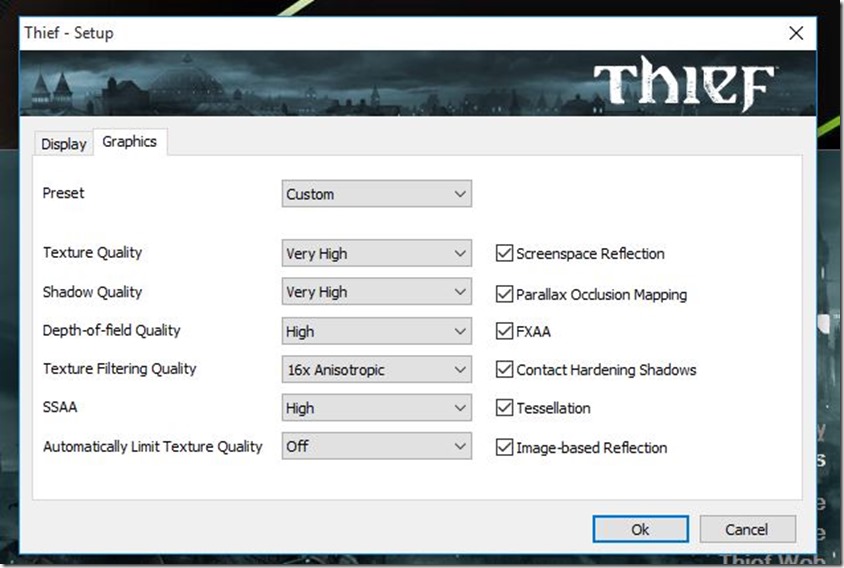 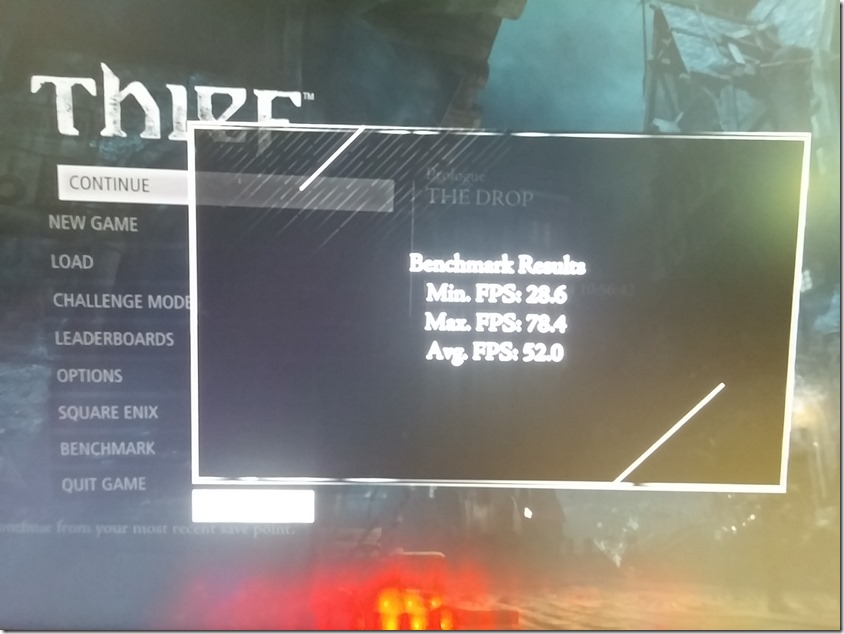 You can see from the last picture that your getting about a average of 52 fps with a max of 78 fps. That is a decent score for stock settings.

I did also run Grand Theft Auto 5 for you. Now I bench them threw the built in software and also ran fraps.

On there built in it runs.

So your getting average of 59 FPS.

Now with the Fraps on screen display it showed around 60 fps.

With Mortal Kombat there was no bench system so I used Fraps and you get average of 59 FPS.

All and all a very respectable marks for stock settings.

Well lets get down to overclocked setting and benchmarks. I did not get crazy with the overclocking since I did not want to hurt the card or my PC at this time.

You can see in the next picture is the overclocked GPUZ settings. 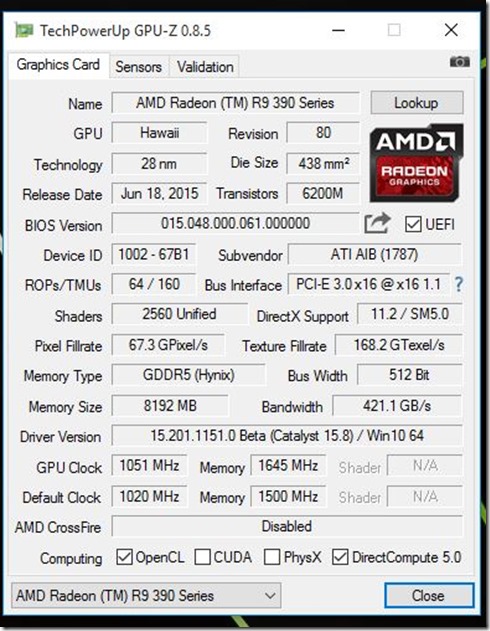 You can see the stock GPU clock is 1020MHz and with it overclocked it is 1051MHz. Now the stock Memory is 1500MHz and clocked is 1645Hz. Like I said I did not go crazy with overclocking. It should be enough to see a difference.

Here is the AMD Catalyst Center  picture of where I changed the clock settings. 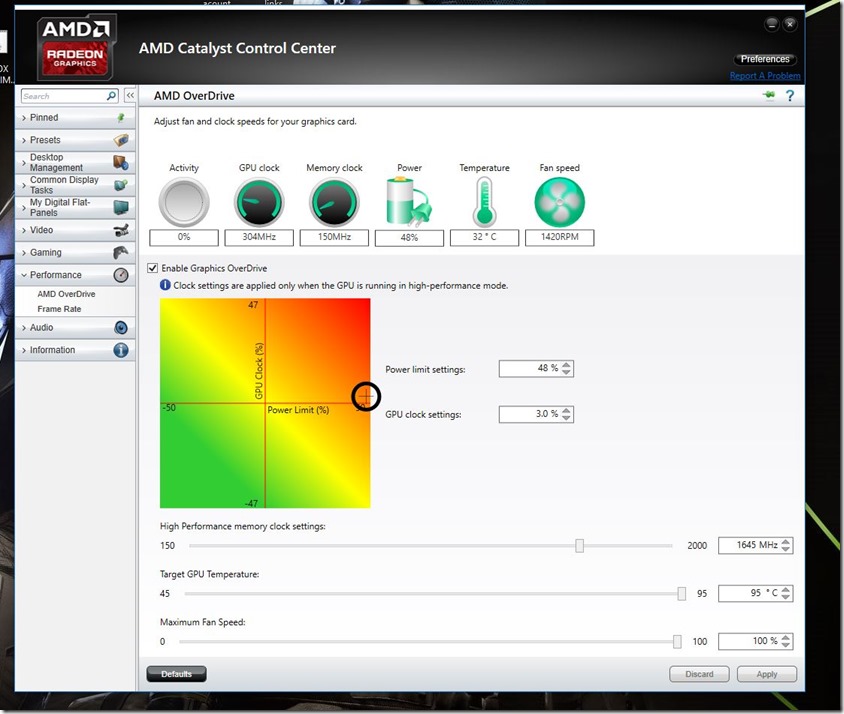 From the picture above I set the power limit to 48% and the GPU clock to 3%.

You can see the score jumped from 9,694  to 10,149. That is a nice jump with the little overclocking I did. You could overclock the Diamond Multimedia R9 390 card even more and get a higher score I’m sure of it.

You can see it is 78 % better then others in it class for what little clocking we did. 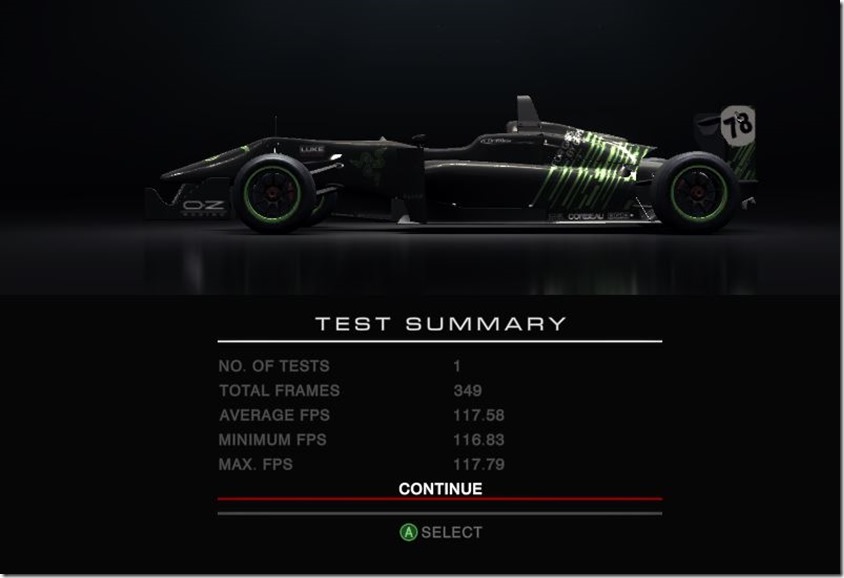 As you can see it Jumped from stock fps. Stock you got 91 FPS and over clocked you got Average 117. That is a nice jumped for what little clocking we did.

Next I will post Thief’s benchmarks with the over clocking. 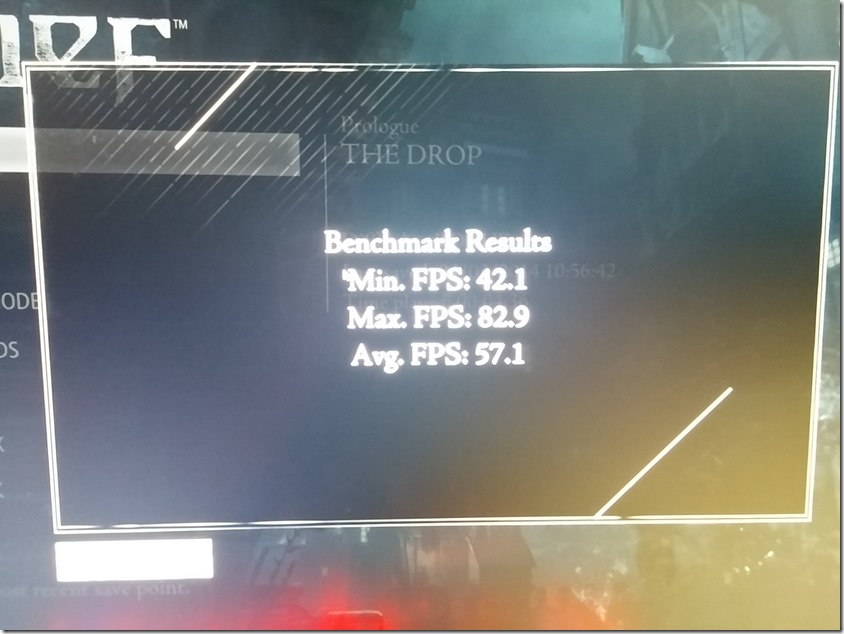 On the built in bench mark software.

You can see it did raise a little not much. You got about the same not much higher. Now this may be due to some setting I may have missed. Now frap showed me that I was getting around 64 FPS. Which make me wonder which one I should believe. Either way 60 FPS ON GTA5  is nice I  think.

Like I said before All bench marks are on 2560 x 1440 resolution. I’m sure you may get better scores at lower Resolution. I’m just speculation since I did not try this for this review.

I will post a few videos of game play for you now. The first is Grid Auto Sports.

The next is Mortal Kombat X and GTA5!

I hope you enjoyed those game play vids!

You know the Diamond Multimedia R9 390 graphics card scored rather good in my mind. You may be torn between this and Nvidia 980. Either card is nice with the R9 390 you get 8 GB of DDR5 and the Nvidia 980 has only having 4GB DDR5. You can see that the R9 has a little more room for later when you have extra memory for when they make new games that take up more. The one thing I have seen is the Nvidia Geforce 980 scores higher at this time in the benchmarks however. I wish I would have had time and saved my bench marks from my 980 so I could have showed you. If you went with the 980 you would be paying a little more for the card. As where Diamond Multimedia R9 390 will run you $349.99 as where the 980 will run you around $500.

One thing I can point out is the price is rather nice and the score are good for the price. You could get more if you know how to over-clock and have the patience to do so. This card is a very impressive card for it’s price range. You can run this in crossfire and have even more fun. The drivers are still coming out and will get better and better as time goes on for Windows 10 so you will see the scores and marks go up, this probably will be true with DirectX 12 from what I hear as well.  I will play with this card from time to time and see if I can get  the  benchmarks higher. If you get them higher on your computer please fell free to leave us a comment below with your marks and system specs. We enjoy seeing what you have and what you get.

I give them a solid 4 and half stars for the R9 390. I would love to have gave it higher score but at this time with the drivers as new as they are I will keep it here.

Disclaimer: Diamond Multi Media sent me the R9 390 to do honest review. All thoughts and opinions  are mine and mine alone