The other night I took my family to see the movie Megamind which my four year old wanted to see so badly for his birthday.  I had read some of the reviews that mentioned the movie was too similar to Despicable Me with even the henchman sidekick being called “Minion” and that it failed to live up to the story and style of Pixar’s The Incredibles but I never judge a movie based on reviews and I was pleasantly surprised at how much I enjoyed the film. 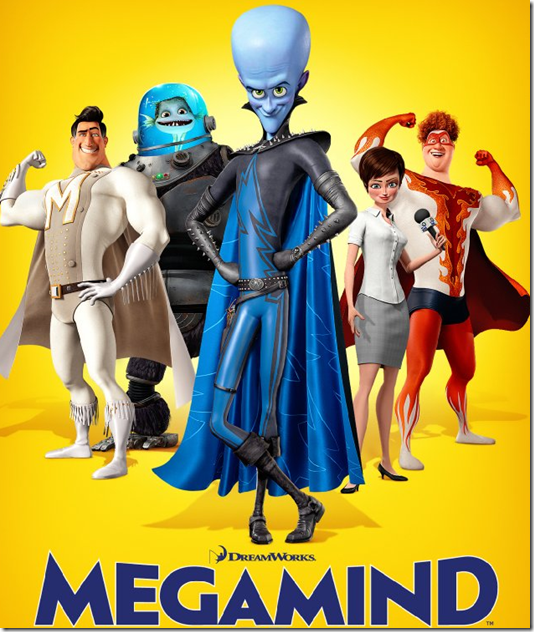 The movie is technically and visually stunning with the cityscapes being among the most detailed and beautifully rendered in animation films.  In one scene near the end of the film where a cylindrical building is shorn in two and crumbling the detail and magnitude is captured very well.  I hear the film is just astounding in 3D and I regret to say that I only saw the 2D version of the film as there isn’t a 3D theater within 50 miles of my house.

The story will appeal to fans who love spoofs of Superman and is about two aliens who hail from the same solar system where they are cast off in an escape pod as babies at the same time.  Metroman the movies Superman equivalent is ultimately powerful, lawful, just and a little too egotistical while Megamind the blue skinned alien who happens to crash land at a prison where he is raised to be bad tries desperately to get noticed and one up his arch nemesis.

Without spoiling the plots which I hate when reviewers do, we see that Megamind has a very human side and is merely misunderstood.  The movie centers around his villainy and eventual transformation into doing and being what he always wanted to be all along.  Tina Fey does a good job as the voice of Roxanne Richie the Lois Lane equivalent who has the eye of Megamind and her side kick reporter who turns into a super villain named Titan. 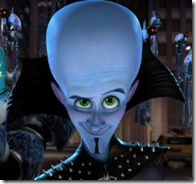 Will Ferrell however does a great job with the narration and voice of Megamind though his comedic tone is toned down a bit much like Jack Black in Kung Fu Panda.    The film in fact isn’t as funny as you would think based on Will Ferrell and Tina Fey lending their talents, it has a few funny moments but there are sections of the film where it is a little sad and a few slower moments for younger kids.  This isn’t a bad thing and the story is set really well though some of the content might be more for kids above 10 and less of the younger generation my four year old loved the entire film and his attention was held the entire time.

One of my favorite parts of the film were the spoof to Marlon Brando and the original Superman where nobody in my family got the “joke” except for me.  You would have to have seen the Godfather and Superman I to make the connection when you see it.

Megamind was a fun film that stands on its own and although it had a few elements in common with Despicable Me I thought it wasn’t that close that you could call it a copycat.  Dragon Blogger rates Megamind 4 out of 5 stars and this is one I will be buying when it comes out on DVD.