You know, as a comic book nerd that has been around for a while, I should have anticipated this.   Marvel has been on a bit of a roll with their movies and when Disney entered the picture, that only made the promise of new cartoons better.   And we all know about the Captain America, Thor, and Avengers movies that are due in the next couple of years.   So Disney XD  has a brand new cartoon called Avengers:  Earth’s Mightiest Heroes to take advantage of the renewed interest in these characters.

Now, The Avengers have really been jobbed as far as cartoons are concerned.   There have been several attempts to make one, but each was flawed a great deal and didn’t compare with what the DCU  produced for their series (Justice League, etc).   To be honest, the Avengers cartoons didn’t even compare to the Spider Man and X-Men shows of the 1990’s.   So how does this one stack up?

In my opinion, pretty well!  I’m not one of those that demand that movie and show continuity match comic books (these days the comic book continuities are all screwed up, anyway), but this time they seem to want to stick with the source material.   In the opening episodes they bring together our initial heroes Thor, Iron Man, The Incredible Hulk, Giant Man, and Wasp and send them against a threat that they could not defeat alone.   Mix this with Nick Fury of SHIELD, Captain America’s return, and some sub-plotting right from the start, and this cartoon drew me in with the first two episodes.  I’ve watched about seven episodes now and, while it slows down a bit, its still pretty good super hero animation with a team that has really not had a lot of respect from the cartoon world. 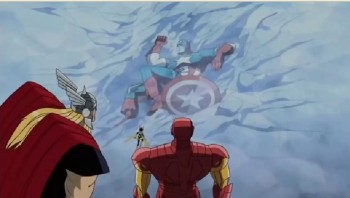 First thing I liked is that they established personalities for all the principle characters right from the start and have already begun to expand on that.   Honestly, how many times have we seen one major personality trait introduced in a cartoon character and that is all they really use for the entire series?  Not here.   Second thing I really like is the fact that the action is pretty first rate and well animated.   That is where many of Marvel’s cartoons in recent years have failed somewhat.  I’ve watched a previous Avengers attempt, Fantastic Four, and Silver Surfer recently on Disney XD and all of them moved pretty slowly, even when a fight is going on.  In Avengers: EMH, we see some fast paced and sometimes tense action.   Thor and Hulk really do knock the tougher villains around, things are blown up, and the characters are moving around during the battles as opposed to just standing in one position while shooting lasers.  They have learned from the success of the DCU cartoons while not imitating them completely.

And for the fanboys (of which I am a card-carrying member), there is plenty to like!   The first episodes might as well be called “Name That Villain” as they revolve around a massive jailbreak, with a wide variety of Marvel characters making appearances.  As I said previously, the sub-plots begin right in the first two episode where we see  someone who appears to be the archer Hawkeye and a major Hulk villain,  but they haven’t been seen since.  The effects for things like Thor’s hammer and Captain America’s ‘shield slinging’ are well done.   Visuals and sound are both enjoyable.

I’m not saying this is a perfect cartoon.   Honestly I think so far it isn’t as good as the DCU Justice League series, but its early so I’ll give them time to grow.   The biggest flaw I’ve seen is the writing.   When I’m watching anything (except a movie that’s ‘so bad it’s funny’) I don’t want to suddenly ask why something happened or wonder what I just saw.   For instance, in the first episode, there are super-villains who have no super abilities but are still in the ‘super prison’, and when they escape they apparently have their armored suits at full power, weapons intact.  Very sloppy, since it would be much easier and cost less to just have the non-powered guy in San Quentin while his power suit sits idle in the vaults of Fort Knox.  I really hate when something happens in a story that makes no sense except for the sake of the script, and all the writer had to do was use someone else who isn’t dependent on their equipment.  Luckily there have only been a few moments that sucked me out of the story to ask “What the…?”

I would say that most comic book fans of any age and most cartoon watching kids will enjoy this series, but those who aren’t in those groups may not find this too thrilling.  At least its not just dumb and innocent bystanders shouldn’t be just bored and left wondering how something so stupid could get on TV (any parents out there know exactly what kind of shows I’m talking about).  It is too bad though that Disney XD is not in all cable markets so not all fans will get a chance to see this.  If its good enough, maybe it will land on the regular Disney Channel along the way.   I’d give Avengers 4 stars out of 5 as far as super hero animation goes, but definitely take a star away for general audiences not already into that genre. 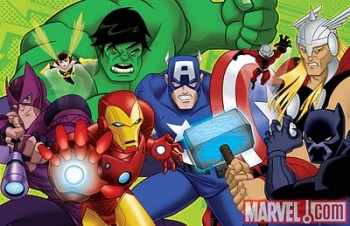