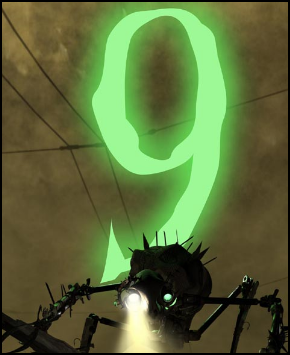 9 which was co-written and directed by Shane Acker opens leaving the audience in utter amazement at what happened to the world, and who are these doll like creatures that have sentience as they try to learn more about the world around them. As the movie follows the story of the characters you learn what happened to mankind, the fate of the world and even how these creatures came to exist. Though the movie had Tim Burton’s name on it during release, he is only a producer of the film and few of his elements are in the film itself.

That being said though the film was very entertaining, the dolls themselves as they find each other and discover what is happening in the world around them. The dangers that lurk around every corner from the machines, and how they discover the truth behind their own existence were all entertaining, but not totally original. The movie hashes much from the Terminator films or The Matrix, but instead of mankind being subjugated or winning, we simply were eradicated. You can even see a touch of Harry Potter slightly in the film (think Voldemort if you are a fan of the series and know it real well).

The film’s visual styles however were amazing, and the dolls themselves did remind me like Oogie Boogie from The Nightmare Before Christmas, particularly 8 reminded me of that character in physical appearance only. The voices were well done and Christopher Plummer was recognizable right from the start as the voice of 1.

The movie was far too scary for my children and was scarier with more disturbing mechanical creations than Coraline, so I would avoid having any kids under 10 seeing this movie unless you want to risk them having nightmares or you are super sure your kids are “fearless”. My own six year old and three year old were properly put to bed when I watched the film, as I knew the film would be too scary for them.

I enjoyed the film very much, and even though the story wasn’t completely original it was again done in a unique and artistic way. The animation was enjoyable and the characters and how they discovered themselves and their world were entertaining.