This blog post is a review of NBC Heroes Season 4 Redemption Episode 8 titled “Once Upon a Time in Texas” and it is intended for readers who have already watched the show as I will be discussing things that happened in the episode and my commentary and review on them.Â  Watch the episode and come back after you have seen it, or read on if you don’t mind losing the surprise.

Once Upon a Time in Texas is all about Hiro trying to save the love of his life Charlie, it is part of his quest to right the wrongs of his past and his goal is a romantic and noble one.Â  We see Hiro arrive in Texas and recap his story to a boy after stealing some clothes from the boy’s yard.Â  Then the story gets interesting as Hiro bumps into Sylar very shortly after, meanwhile Samuel learns of Hiro’s plans and asks his dying friend to teleport him in the past.

The plot twists and time line of the show was in serious jeopardy, and if Hiro made one mistake or altered one key event, the entire last few Seasons of the show wouldn’t have happened.Â  I thought the writers were unbelievably crafty in how they handled this episode.Â  By having Hiro convince younger Hiro to go back in time to meet Charlie and fall in love, to Hiro freezing time just before Sylar opens Charlies head to steal her ability.

Samuel meanwhile arrives in the same diner three years prior to warn Hiro about making changes and kind of watches and oversees Hiro trying to alter the past and save Charlies life.

We learn that Noah had a near affair with a coworker only to break it off, and Lauren was distraught enough to have the Haitian wipe her memory. Was she introduced as maybe she might be joining the show as Noah’s partner again later? Was she someone with abilities or a normal agent of The Company?

The fact that Hiro removes Sylar only to see Charlie dying of her brain aneurysm and make the decision to strike a deal with the devil to save her. I was unsure how Sylar had the ability to precisely use his “severing” ability to surgically cut out the aneurysm from Charlie’s brain without causing serious harm. It seemed to precise of that ability use for his then underdeveloped abilities, but for the sake of the show it was very interesting.

In the future Sylar wouldn’t have been bested by Hiro, but a Sylar three years earlier with fewer abilities and less powers and understanding was no match for Hiro’s ability to freeze time and thwart him, he also manages to give very vague and little information to Sylar and in fact, Hiro himself doesn’t know that Sylar is still alive in the future, so he genuinely believed when he told Sylar that heroes joined forces to defeat him.

Charlie and Hiro were about to embark on a happy life when Samuel throws a wrench into the works and asks his dying friend to trap Charlie somewhere in time. Only Samuel knows where she is and Hiro is required to work for Samuel in fixing his past before he is willing to tell Hiro how to rescue her.

In a glimpse of eight weeks earlier we see something about Samuel’s mistake has caused or is related to the death of Mohinder, so presumably fixing the past may be in preventing Mohinders death.

This episode was extremely entertaining, and I was hooked watching and trying to predict how Hiro would outwit Sylar and still manage to save Charlie from dying. The fact that Samuel shows both desperation, remorse and conviction for his actions reveals even more about his character which appears to be a dark shade of gray when it comes to morals and ethics.

What did my readers think of the episode? TV.com rates this as the highest rated Heroes episode of the Season so far. 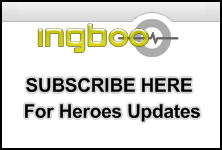