I took the family to see Iron Man 2 last night and had a few people on Twitter interested in hearing my opinion and review of the film. My whole family thought the movie was very good, but it did lack some of the magic of the first film and I will go into more detail about the film.

The egotistical and arrogant Tony Stark is front and center for most of the film and he starts to self destruct in his personal life while his time to live starts to fade as his body is poisoned by the toxic metals leaking into his blood stream from powering the Iron Man suit. With death looming on the horizon Tony Stark slips back to his original not care attitude that makes the film feel like it is retreading a little bit of his personal growth from the first film. 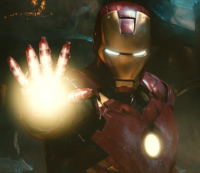 This does cause the movie to lack some of the most fun moments of the first film where Tony is actually enjoying his Iron Man suit and having fun with it, but the film makes up for this toward the middle and later half. In the sequel with pressure from the Government and military, Tony is trying to assure the world that his Iron Man technology will remain his property and he can protect the world solely. His assurances that only he has the technology of the suit and other countries and companies are decades away from being able to catch up with his technology are meant to help support his position.

This of course isn’t true as we see from the previews that clearly there are other technological baddies that are going rampant and Whiplash is seen having an Arc Reactor powering his whips. (I will talk more about Ivan in a bit. 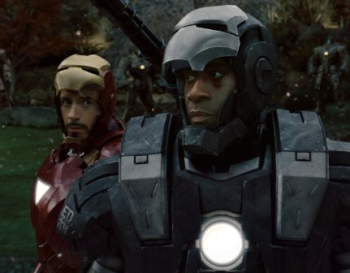 I did think Don Cheadle did a great job in the role of Rhodey and the film gets quite entertaining when he has to confront Tony and take one of the Iron Man suits back to the military. They battle each other in two versions of the armor (War Machine vs Mark V), when they team up finally at the end of the film to combat the army of drones created by Ivan the “friendship” is really enjoyable as they throw one liners at each other.

Speaking of Ivan, I thought Mickey Rourke did a good job as Ivan Vanko (Whiplash) and portrayed the character with conviction. The character had a bitter hatred and sought vengeance against the Stark family for previous conflict between both Tony and Ivan’s fathers. The Iron Man movie was always about technology rather than “super powers” when it comes to the heroes and the sequel is no exception, it is nice to have a film focus on weapons, warfare and the technology behind it (even if its fictional). This lends to a more believable superhero and what might actually be in the future, whereas beings with powers like the X-Men or Spiderman are more fantastical than based in science. 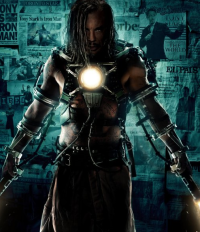 Iron Man 2 has some humorous moments and several of these are provided by Happy, Tony’s bodyguard who is played by Jon Favreau himself who directs the film. Particularly the scenes where Happy and Natalie Rushman (played by Scarlett Johansson) interact with each other. Sam Rockwell joins the film playing the CEO Justin Hammer of Hammer Industries which is a competitor to Stark Industries in the weapons and technology development area. His part is well acted, conniving, back stabbing and jealous of Tony Stark he resorts to hiring Ivan to help him build suits that can match the Iron Man series.

Overall, Iron Man 2 was definitely worth seeing and the action sequences, though there felt like only a handful (3 to be exact) were well done and stylized. I thought the final showdown with Ivan Vanko ended far to quickly, though the battle against the drones was of a decent length and engaging. The film does a good job of setting up some clues for the Avengers, and if you stay past the end credits you can see what they find in New Mexico which helps with the lead in. Dragon Blogger gives Iron Man 2 three out of five stars and I still think it is worth seeing in theaters vs waiting for it to come out on DVD.