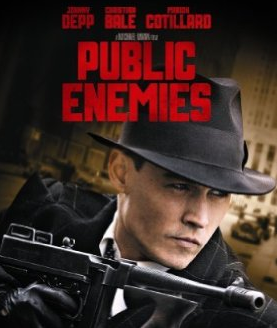 I am a Johnny Depp fan and have been ever since Tim Burton’s Edward Scissorhands. I think he is one of the most versatile actor in the entertainment business and is able to play virtually any type of character a movie needs. His portrayal of John Dillinger was fantastic, and from the opening scene of the movie when his character was full of optimism and promise at the score of each robbery to the ending of the film where his character became darker, almost brooding and awaiting the fate that would befall him Johnny Depp never missed a beat.

The movie is engaging, action packed and has a romantic twist between himself and Billie Frechette (played by Marion Cotillard) one that eventually would cost him his chance to escape and survive. His love for her is what drove him to take the extra risks to see her and help her flee with him, and you can see a sort of nobility and honor in the man even though he was a cold blooded killer.

The movie had a fantastic cast and Christian Bale played Melvin Purvis very well. A man who was put as the head of the Federal Bureau he was smart as well as cunning in his pursuit of the crime bosses and John Dillinger in particular.

If you are a fan of crime movies, particularly the old style ones that portray the era of Tommy Guns and Dames, then you will enjoy Public Enemies. This film was worth owning on DVD, and you can’t help but feel sorrow and empathy for the murderous bank robber known as John Dillinger.