This was the second to last episode of the season 4 of NBC Heroes and it had some interesting revelations about Noah Bennett and his life before his marriage to Sandra and having Claire.  Samuel forced Claire to watch these memories displayed and instead of resenting and hating her father more she merely continued to side with him against Samuel.  Meanwhile, Samuel is about to make a move to let the world know that he is to be feared and reckoned with and plans on moving the carnival show to Central Park (Why is it always New York, every single season somebody wants to devastate NYC it seems). 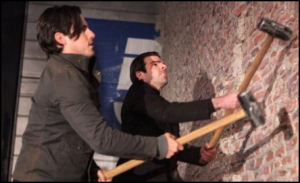 Meanwhile the only one who can stop Samuel and save Emma would be Sylar, and Peter was trapped in Sylar’s mind for months battling him mentally and physically while the two of them seemed to work out their differences and Sylar repented and apologized for killing Peter’s brother.  The odd thing here is Sylar seems like he has truly repented by having spent years locked in isolation (which translates to only a half a day in the real world) he may have made progress and I would really like Sylar to become a more noble and good character.  His character has so much potential if they don’t keep flip flopping him around, he works well as a “dark knight” character one who may do good things but not necessarily take the lawful route to achieve them.

The season finale of Heroes comes next week where the showdown is about to take place, meanwhile we haven’t heard from Hiro, Ando or Suresh in a few episodes and it would be fitting for all the heroes to arrive in Central Park to battle Samuel together (ironic since the more people with abilities around him, the stronger he becomes).