I was even more excited than my kids to go see Toy Story 3 in theaters, after fifteen years would the movie still hold up and engage audiences like it first did when it broke ground as the first major CGI film. Pixar has never previously disappointed and though some films were more successful than others, each one was unique and stands out as great films in my opinion. Their ability to appeal to entire families of every age and culture was one of their biggest strengths.  I was very excited to write my own Toy Story 3 review and share my impression and opinion of the movie without revealing too many spoilers, I hate reviewers that break down every scene of the movie so you know everything that happens.

First I want to talk about the Pixar Short “Day & Night” which opened prior to Toy Story 3, this was by far the best Pixar short I have ever seen to date. Day & Night was such a brilliant and artistic film that shows 2D animation with 3D CGI through the 2D characters, the interaction of Day and Night were phenomenal. The piece is also very political and has a great message about tolerance, understanding and loving others for their differences and how we are all the same underneath. Truly remarkable I watched this Pixar short film in total awe and loved every aspect of it. It was like watching animated poetry and I am a poet and can relate to the messages and “emotions” in the animated short.

On to Toy Story 3 where we see Woody, Buzz, Jessie and the gang deal with the fact that Andy is all grown up and moving away to college. Woody has the hardest time with the transition and the film has nostalgic touches for all parents with kids growing up and moving away. The film was incredible from the animation standpoint and certainly has come a long way since CGI first started in the early to mid nineties, the film was crisp clean and enjoyable. The rustic look of the toys had impeccable details and there were many new toys included in the film including a nod to some Monsters Inc. toys which I thought were a great touch.

The story is original, unique and the whole concept of the toys ending up as daycare playthings only to find out things weren’t as good as they seem at the daycare was great. There were some sad moments to the film and one scary scene where my three year old was visibly concerned that the toys were going to end up “dead” but the film is enjoyable for any age and no scarier than Toy Story 2 was. 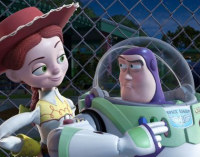 The humor scenes were great and one of the best scenes of the film was when Buzz Lightyear gets switched into Spanish Mode and starts salsa dancing and courting Jessie. Mr. Potato head had more scenes in the third film than previous ones and is also funny with his cantankerous personality.

The ending was fitting for such a film that brought back nostalgia and was a perfect way to end the Toy Story Series. In all honesty, most films weaken with each succession in a series and this was one of the few exceptions where I felt Toy Story 3 was at least as good as its previous films.

Toy Story 3 is one of the best and most enjoyable CGI films you could possibly watch and this film will go on my “own the day it comes out” category.